Two weeks ago, the police found the body of Laura Palmer.

Yesterday, the police arrested Ben Horne for the murder of Laura Palmer. He was the wrong man.

Yesterday, BOB struck again, and we saw who did it. Leland Palmer killed Maddy Ferguson in the living room and danced around while she choked with blood. Leland has a cover story this time: Maddy had been telling people she was going back to Missoula, and was expected to leave today.

Today, we have fun! 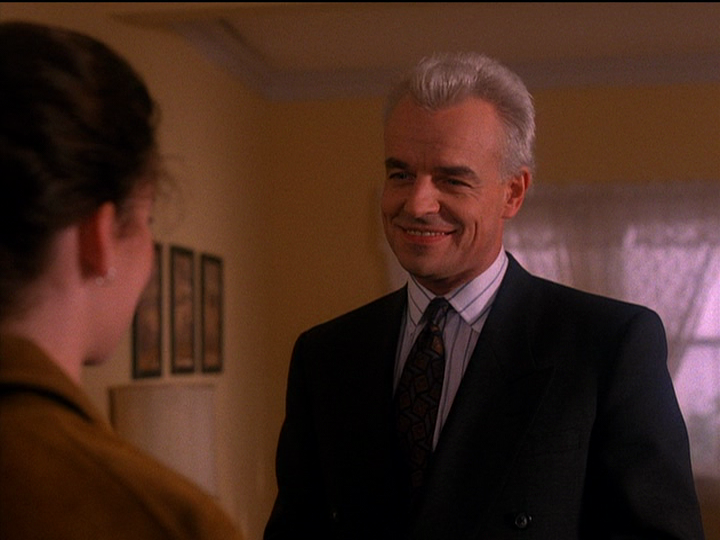 The sun is burning through the clouds this morning as Leland Palmer hits golf balls inside the house to hide the signs of last night’s struggles. The broken lamp, the moved furniture, it all looks ordinary if one thinks Leland was just practicing golf. In reality, Maddy’s dead body has been crammed into Leland’s golf bag, which, after telling Donna and Bobby that Maddy was SO disappointed they didn’t come earlier to say goodbye, he shoves into his trunk as he sets about his daily routine. He has to go to work, sign up the family for Glenn Miller night, and dispose of the latest dead body. It’s a typical Friday for BOB.

When the police stop by the Great Northern to tell Leland/BOB that they arrested Ben Horne for the murder of Laura Palmer, Leland is in the middle of doing a Fred Astaire routine with his putter for the guests. He prances around as a single clarinet plays under the ominous Badalementi synths of Twin Peaks, the memory of the music of a clown buried under all the sadness. But, the police are here to wreck his party…they think. Upon hearing the news of their arresting his boss for the murder of his daughter, Leland excuses himself after being overwhelmed with emotion. That emotion isn’t the despairing sadness of a father but pure unadulterated glee, as Leland isn’t up for trial anymore and BOB doesn’t have to change vessels any more. Leland just barely disappears behind a doorway before he is overwhelmed with laughter that, when Cooper comes over to check on him, he has to disguise as crying in order to pass as a normal traumatized parent who just found out that their daughter’s murderer has been arrested. 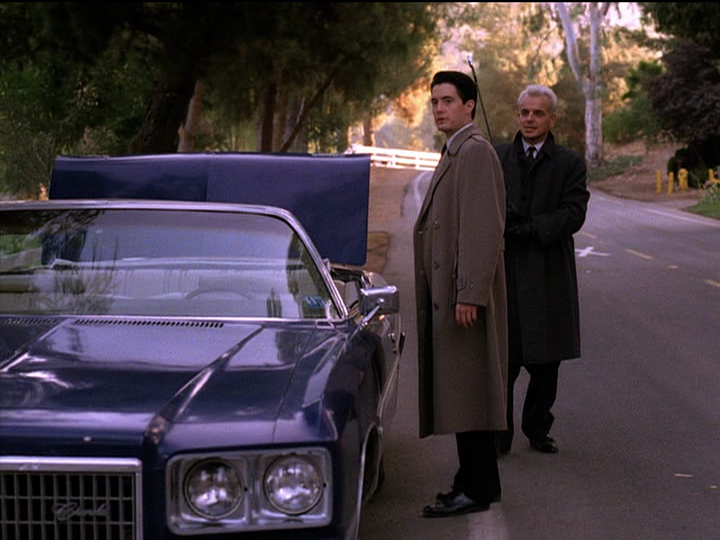 It’s not the last time they see Leland so jaunty. Later in the day, Leland/BOB is casually swerving back and forth in his convertible with the top down as he sings “Surrey With A Fringe On Top” from Rogers and Hammerstein’s Oklahoma! Singing a song of woo, distracted by the joy at having a dead body in the trunk, he almost hits the police as he comes around a hilly curve. Being just outside a golf course, Leland/BOB offers to show Cooper his golf clubs, the golf bag still containing the dead body of Maddy Ferguson, ready to kill at a moment’s notice. It’s only Hawk’s timely emergency call that saves Cooper from being attacked.

Cooper knows something is deeply wrong with this situation, but he doesn’t know what yet. MIKE also knows something is wrong. He had been put under 24 hour watch at The Great Northern while the sheriff works on building a case against Ben. While the real BOB is out there killing people, MIKE can’t be trapped in a small hotel room, no matter how kitsch the decorations. After asking for a glass of water, he beans his guard over the head and runs off through his open window. MIKE has escaped and BOB is free.

MIKE doesn’t get very far, though. They found him near the waterfall, which, as we see from the opening credits every week, is about 100 feet from The Great Northern. They bring him back to double check Ben Horne, but MIKE says Ben doesn’t have BOB in him. Against Cooper’s wishes, Sheriff Truman charges Ben with murder given the mountain of evidence against him created by Frost and Lynch. As Harry puts it, “I’ve had enough of the mumbo jumbo. I’ve had enough of the dreams, the visions, the dwarfs, the giants, Tibet and the rest of the hocus-pocus. Now, we have hard evidence against Ben Horne.”

Ben doesn’t exactly have a case to back him up. His main alibi is that he was sleeping with Catherine, whom he still thinks is dead, the night Laura was murdered. His lawyer is that misfit brother of his, Jerry who has been disbarred in several countries and states. Rather than being focused on the murder charge, Jerry seems more focused on remembering their babysitter doing a sexy fully dressed flashlight dance as they watched from their bunk beds. In fact, the only thing he has going for him comes from Pete delivering Catherine’s message of blackmail. She’ll free Ben Horne, only if he signs over the Ghostwood Development and all of the money he has scrounged up. And, finally, after 15 episodes, we have our second connection from Laura to Ghostwood…if not for Laura’s death, Ghostwood would be in production. The woods work in mysterious ways. 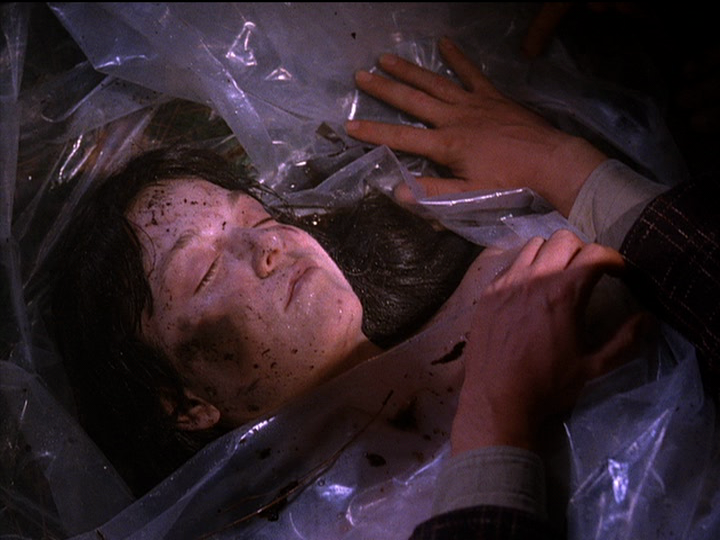 A final call at the end of the episode reports something nobody wanted to hear. Another dead body has washed up on shore. In a mimic of the previous murder, they roll over and uncover the face. Here lies Maddy Ferguson, dead, washed on shore, and wrapped in plastic. Sheryl Lee has been murdered twice, and twice she gets framed in the same manner. This story is almost over… 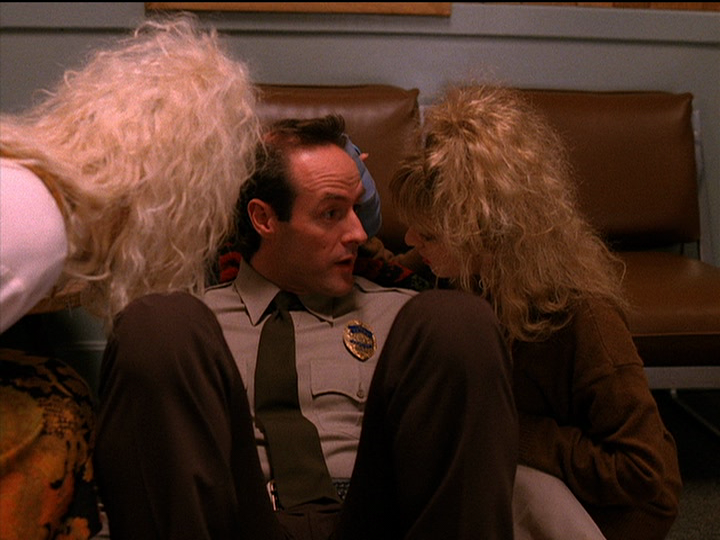 As Laura Palmer’s story draws to a close, there is still another 15 episodes to go in Season 2. We can’t just mourn for the next 15 episodes. But, what can drive Twin Peaks if not the mystery of the town’s dead All American Girl?

Could it be Bobby trying to blackmail Ben Horne over the mill fire? With that tape from Leo’s boot, he might have enough information to get something out of Ben, and he’s hoping for an executive job. But, he has strong competition with Catherine on the blackmail front.

Maybe it’s the Jennings and their drama? Norma’s mother, Vivian, pops in to eat food from Toad’s plate, and comment on Norma’s figure. Norma is newly married to some guy who looks like a used car salesman. Hank comes back after being gone for two days, and recognizes him as Ernie “The Professor” Niles, a fellow ex-con whom he met in prison. Ernie says he met Vivian at a Republican fundraiser, but is still gambling as much as he can.

Or, what about Lucy Moran? She comes back from her sister’s place with her sister and her sister’s bay in tow. Now that Andy tells her that his sperm is functioning, she doesn’t know what to make of it. Lucy has two men, a woman, a pregnancy and a new baby on her hands. Is that enough?

What happened to Josie? Pete is stirring up Josie memories with the sheriff as they have different stories on who the mystery Asian guy was. Josie told Pete the guy was her cousin, she told Harry the guy was her assistant, and we saw Josie have sex with the guy.

How come there’s no Super Nadine in this episode?

And we inch ever closer to the Worst Plot Line Ever. 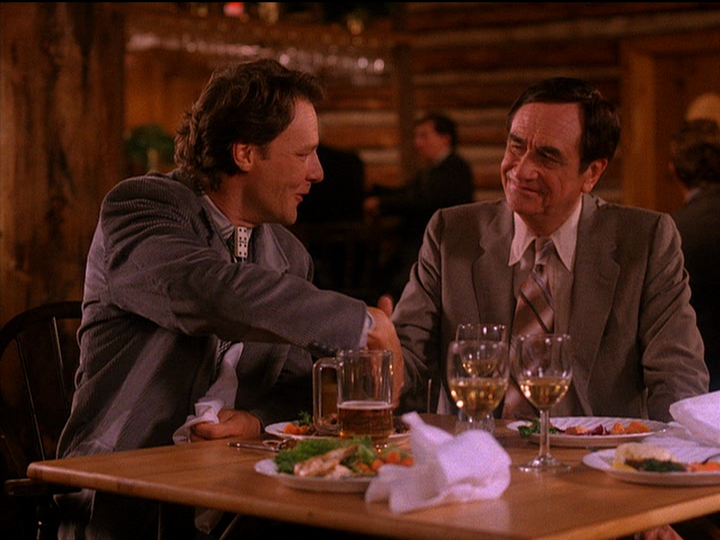