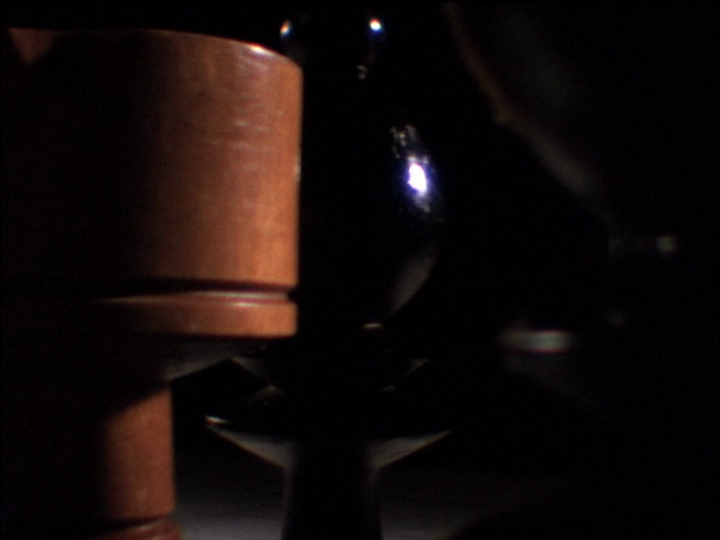 It has come to this. After 4.5 truly abysmal episodes, The Diane Keaton episode is the signal that there’s smoother sailing coming just up ahead. We just have to get through these last little birth pains and we’ll finally be back into, well, if not classic Twin Peaks territory, but at least pretty good Twin Peaks territory.

I feel really bad for Diane Keaton. This episode is one of the most well directed episodes since Leland’s death, if not since Maddy’s murder. Diane Keaton based her episode style on David Lynch’s aesthetic sensibilities, but puts her own feminine twist on it. From its neo-noir base to multi-layered frames to a deep fondness for textural atmosphere and a vast improvement in acting, Diane Keaton’s episode feels like it could have been part of the original series of Twin Peaks. I could barely stop myself from taking 300 screen caps of every scene, every frame here just felt so lush and lux and part of a cinematic sensibility. The past four episodes had mass amounts of bright lighting, boring framing, and have been, mostly, typical television style storytelling. I’ve had to struggle to find decent images for each of the past double articles, but Keaton employs enough strong visual storytelling for four articles. I’m left with an abundance of imagery that I feel bad about leaving any of it out. 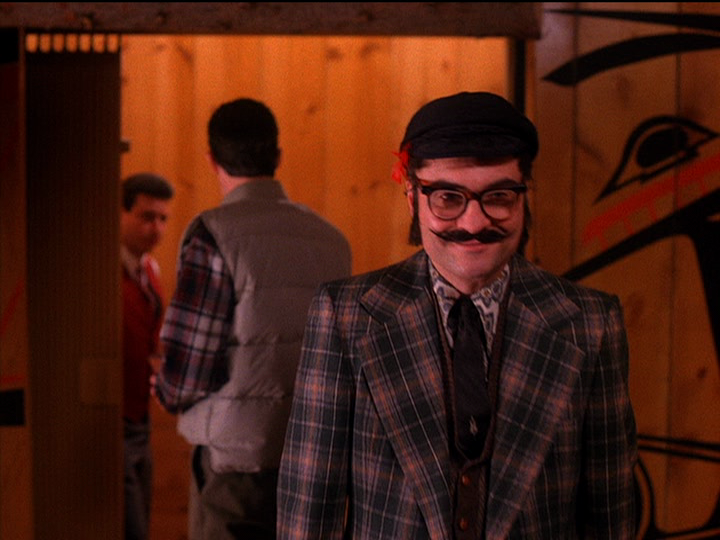 The problem is that Keaton was burdened with directing the climax of two of the worst plots in the show’s history – Ben’s Civil War and James’ dalliance – and has to introduce Windom Earle, the embodiment of cold calculated insanity, as the dark clown whose disguise game is somehow even more goofy than Catherine’s Mr. Tojamura costume. Yet, all of these stories are directed with a passion that is completely undeserving of the subject matter. I’m guessing that these plot elements are a heavy part of why people hate this episode. Besides the terrible stories in this episode, the networks were supposedly shuffling around Twin Peaks‘ days and time spots by this point creating extra resentment in the fans who never knew when the next episode was going to drop.

Keaton still manages to give it her all, finding her way through a bunch of craptastic stories to give one of the more interesting, if not successful, episodes of the Back Half Doldrums of Twin Peaks. Diane Keaton begins it all by searching through all of the male-oriented chess pieces to focus on the most powerful piece in a chess board: the Queen. 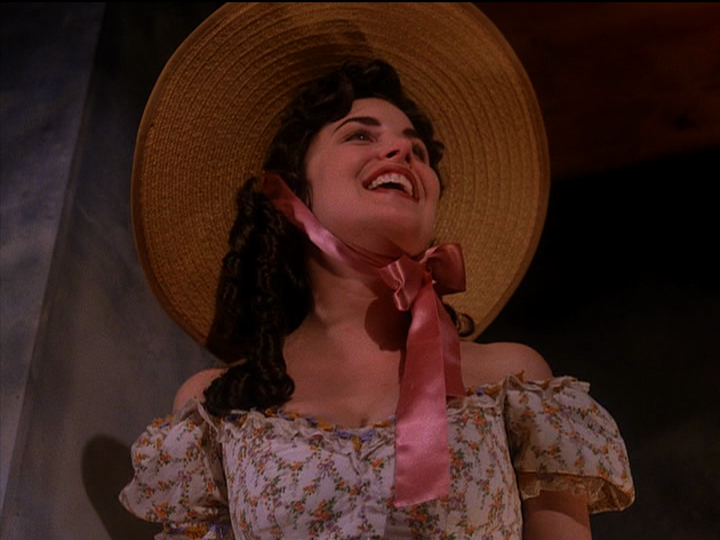 is over. The south won, thus allowing Ben to regain his sanity? I guess the south are the good guys in this conflict? This whole thing was muddled from the get go. Diane Keaton’s increasingly insane visual plotting, including an artificial wall of blue sky, is stunning and the closest thing to justification for this foray into bizarre historical revisionism. Keaton agrees with everybody who hates this episode, and treats this like the community theater plot it is, with Bobby, Audrey, Johnny and even Dr. Jacoby all swapping roles in playing out some terrible version of the civil war just to placate psychotic Ben Horne. . 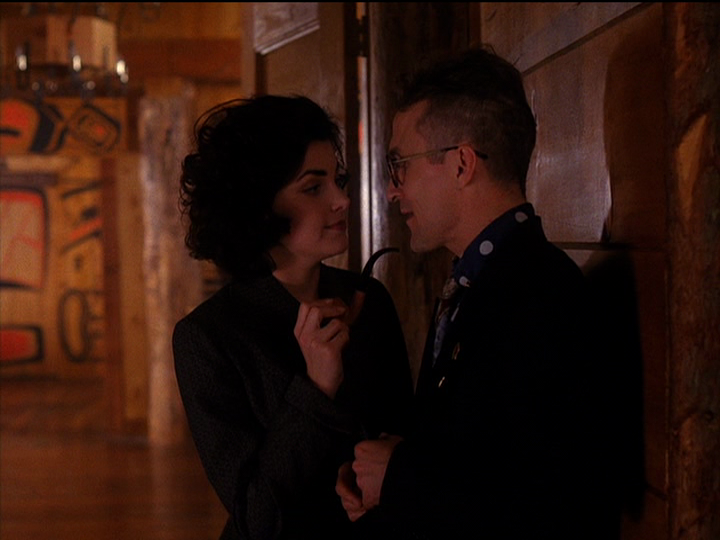 Ben’s plot also serves to harden Audrey into becoming a strong businesswoman out of necessity. Jerry isn’t qualified to run the family business, Ben is incapacitated, so Audrey has to run it. She turns into even more of a hardass than her father when Jerry thinks about out maneuvering her to take control of the family fortune, but Audrey does it to help people, unlike the brothers Horne who are just in business for the money. 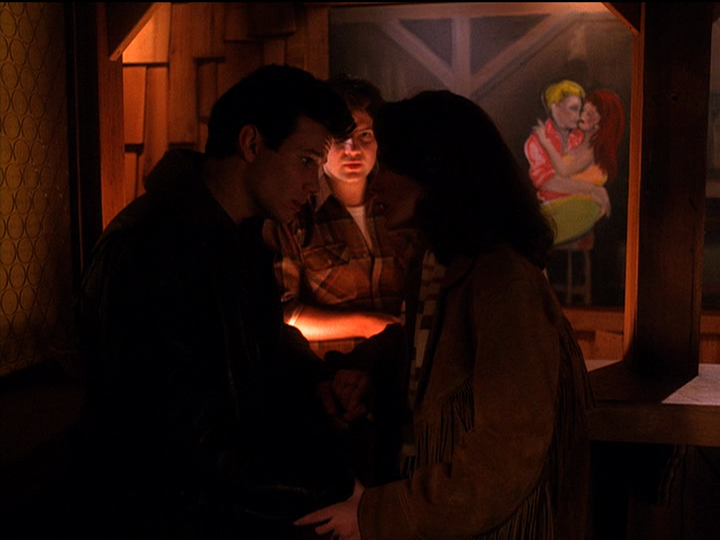 is going to die. One wishes. Malcolm – Evelyn’s “brother,” “chauffeur” and now “lover” and “co-conspirator” – made Evelyn setup James and make it look like he killed her husband out of love. The police are after him now. James, after having escaped Evelyn’s clutches yesterday and having visited with Donna at the bar today, gets an award for being the most intelligent being on Earth by breaking back into Evelyn’s house to try to convince her to tell the police the truth (mirroring Ben begging Catherine to tell the police the truth). But, Malcolm beans him over the head and is going to kill him…until Donna steps in and then Evelyn kills Malcolm, promising to frame Malcolm for her husband’s murder, sending Donna and James on their way.

The one bit of interest is that Malcolm gets a possessed voice in this episode, sounding a little like the monstrous voices heard during Maddy’s murder. Was Malcolm possessed by BOB? This is the most Twin Peaks-iest portion of this storyline, and it’s almost fascinating. If only I could care.

Donna sums up this whole plot line when she berates Evelyn in a bar, “You really like to make everything sound pointless and stupid, don’t you?”

James still has one more episode and then he’s gone. But, he’s coming back for the new series… 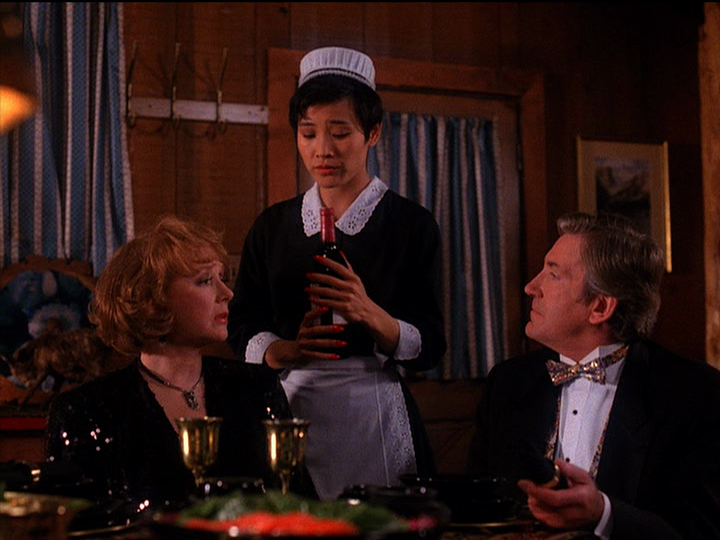 Since Sheriff Truman learned about Jonathan, the killed Asian man – the man that Josie identified as her cousin to Pete and her assistant to Harry – he has become very suspicious of Josie. Harry is asking questions, the Seattle Police is asking questions, Catherine has her blackmailed, Thomas Eckhardt is back in town to reclaim his long lost love who isn’t welcome back in Hong Kong, Albert and Cooper figure out that she’s the one who shot Cooper back in the Season 1 cliffhanger…Josie is feeling increasingly trapped and helpless. As a result, she clams up and hugs herself ever tighter even as everybody else talks about her as an object.

Thomas Eckhardt finally pays a visit to Catherine Martell, not knowing that Andrew Packard, his former friend and business partner, is still alive. Eckhardt’s only concern is to go home to Hong Kong with Josie, and Catherine blackmails him, demanding a ransom of sorts so he can take her back with him. But, Josie hasn’t been consulted on this at all. She knows that Eckhardt shot Jonathan, and doesn’t know whether she will survive the trip after all. Her story is coming to an end rather quickly as well. 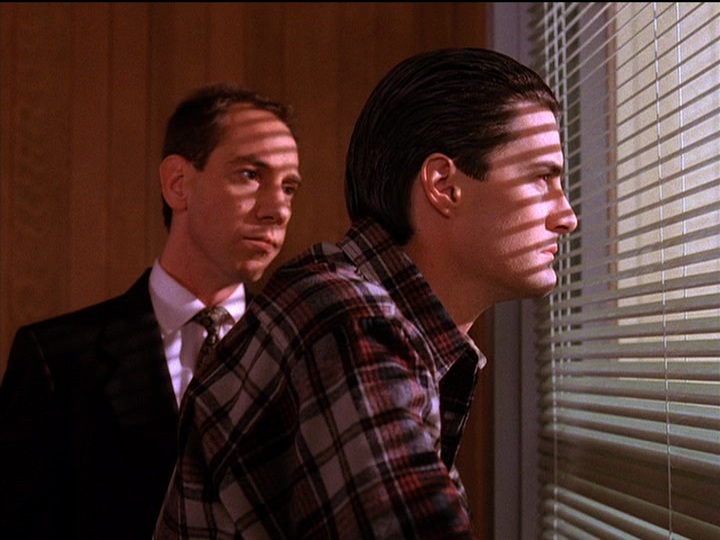 Albert is back and he’s more chummy than before. He storms into the office and greets Sheriff Truman with a great big hug and big pats on the back. Agent Cole sent him back to Twin Peaks because Windom Earle sent five pieces of wedding attire, including Catherine’s wedding dress (Windom’s wife and Cooper’s Achilles Heel), to five police stations across the country, forming the letter C on a national map. Windom left a map on the bottom of the table at the power station he blew up, signaling that he was the one who killed the guy yesterday, even though everybody already knew that. Windom’s vengeance is personal, but he’s hiding his real purposes in Twin Peaks, which has to do with Project Blue Book and the Lodges, but nobody knows that yet. 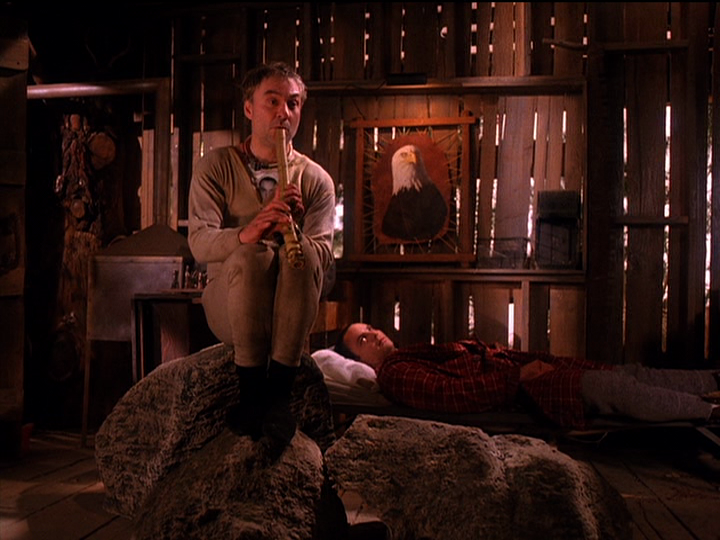 Earle himself is having fun turning Leo into his personal pet, which is really satisfying considering his history of wife abuse. First he threatens to bust his head open with a bone flute, that he plays while crouching on a couple of boulders like Pan or Puck, entities of mischief and nature. Then, he fits Leo with an electric collar like a dog before force feeding him gruel in the same babying manner that Shelly had to feel him when he was a Coma victim. Any time that Leo decides to misbehave, he’s shocked in a very painful manner. God, I love it. It’s the exact type of no-mark pain that Leo inflicted when he beat Shelly with a bar of soap wrapped in a towel.

Cooper still thinks that Earle is still going to be playing Chess, and employs Pete (who happens to be a Chessmaster that plays simultaneous games of chess at the Double R) to play against Earle. Coop wants Pete to play a stalemate game and lose as few pieces as possible. But, Earle is changing up the game back to poker, and is looking to entrap four Queens of the town: Shelly, Audrey and Donna. He writes a poem that he rips in thirds and delivers while disguised like a former pizza parlor owner who decided to try his luck selling used cars. It’s hilariously awful. 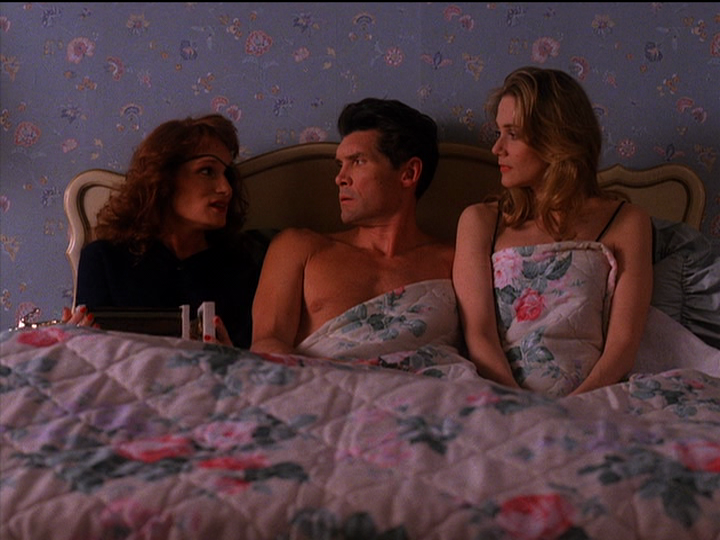 Super Nadine comes home disqualified from the tournament for doing a helicopter throw on an opposing wrestler, but somehow still won second place? What? If you’re disqualified how are you still in second place? Anyways, she comes home in time to catch Big Ed and Norma in bed trying to discuss how their future together will play out. Luckily for everybody, Teenage Super Nadine has her eyes fixated on Mike Nelson, and totally wants to jump his teenage bone, since he has the stamina of a teenage wrestler. Wrestlers are very energetic. Now that she caught Big Ed and Norma, she doesn’t feel so guilty about chasing after Mike! And, their whole subplot turns into one big wife swapping party! 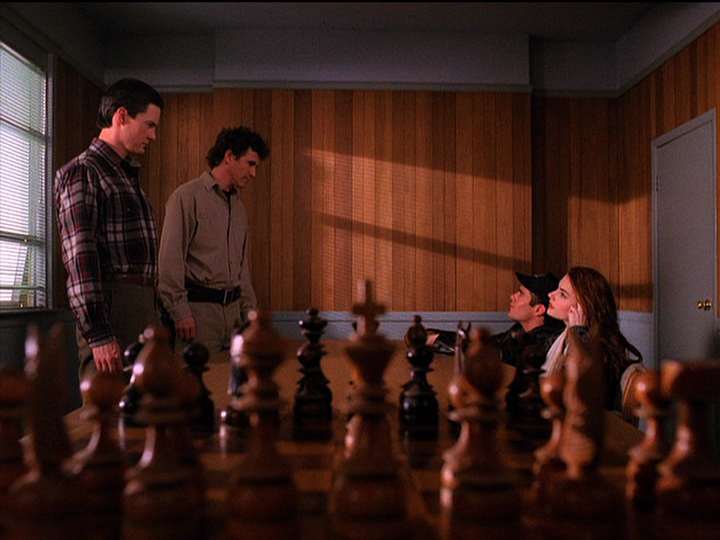 As soon as Leo left, Shelly and Bobby report his disappearance to Sheriff Truman. Along the way, they also disclose that Hank Jennings was the one who originally shot Leo through the window of the house. But, Bobby’s back to being a dick around Shelly. He’s acting like he’s back in Episode 1, complete with football jacket, by acting like a big and tough egomaniac to the cops. He doesn’t have a consistent characterization, but every scene in this episode is a full commitment for him.

Now that Leo is gone, Shelly is going back to work at the Double R. Her first task is to help Norma clean a plastic ice cream cone with the words Eat It. 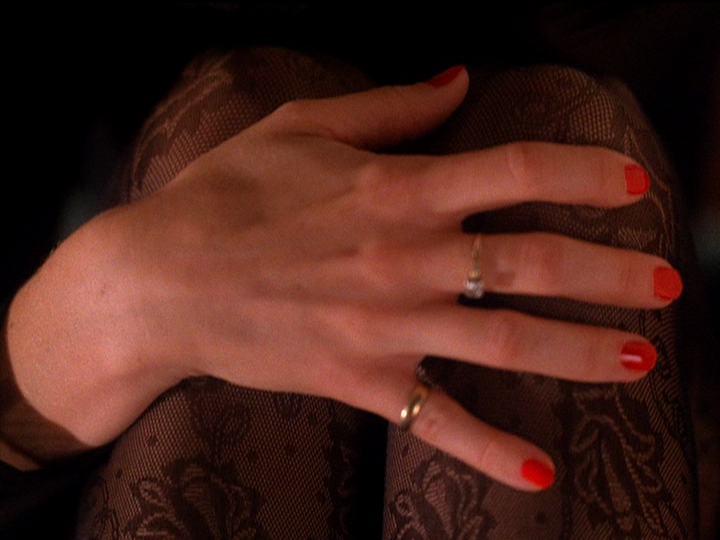