Browse: Home / Witch Horror Movie Should You Watch? Definitely Not The Wretched

Did any movie get more of a boost from the lack of new movies in the pandemic than The Wretched? Under normal circumstances, The Wretched likely would have came and went without much of a whisper in its early May 2020 release like the majority of IFC Midnight releases. But, emboldened by the lack of competition, IFC embraced drive-in movie theaters for the first time with The Wretched. Without any other new horror films in the marketplace, The Wretched has managed to crack $1.8 million at the box office on just a $66,000 budget. The dearth of new movies makes it understandable why The Wretched would become a sleeper hit. Still doesn’t make it a good movie though.

The Wretched concerns Ben (John Paul-Howard), a kid whose parents are going through a divorce. In the middle of this, he arrives to his dad’s (Jameson Jones) house for an extended stay. Ben expects his biggest concern this summer to be nuisances at his job working at the pier. However, some odd occurrences at a neighbors house lead Ben to realize that something sinister is lying in wait next door. His worries only increase once his neighbors son vanishes entirely. Now, Ben is convinced a witch has taken root next door. Nobody will believe Ben, so it’s time for this kid to take on the witch alone.

As evidenced by its prologue set in 1985, The Wretched is clearly channeling movies of the 1980s. Setting the story during the summertime with teenage protagonists only makes this further feel akin to Fright Night and Gremlins. The Wretched takes a lot of elements from those older movies but forgot to take any of the fun. The Pierce Brothers, who wrote and directed The Wretched, execute this movie with a shocking lack of creativity. This is made extra apparent during early character-driven scenes devoid of any witches or horror, especially an early sequence where Ben and love interest Mallory (Piper Curda) bond during a teen party.

The only entertainment found in this scene is the lyrics of the public-domain song that these kids are playing in the background of their rowdy party. Otherwise, the lines traded between Ben and Mallory are more grating than cute. You think this scene can’t get worse and then it throws out a groan-worthy shot where the camera ogles Mallory in her bikini. Things mildly improve once a witch shows up and starts making people vanish, but only mildly. Even here, The Pierce Brothers don’t show much in the way of skills when it comes to executing scares. This is especially apparent when the witch begins her rampage by possessing a woman named Abbie (Zarah Mahler).

This big development is handled with all the subtlety of a sledgehammer to the face, with Abbie brazenly acting like a woman whose now possessed by an evil force. Among the many problems with this decision is that it gives The Wretched nowhere to go in its depiction of the witch. This is a movie that peaks too early with a being that isn’t even all that scary at its apex. In a baffling move, the neighbor, the central focus of the first-half of The Wretched, just totally vanishes in its second-half. The Wretched has a bad habit of fixating on plot details before totally forgetting about them. Just look at Ben’s struggle with his parents divorcing, which ends up being totally superfluous to the production.

Is there really anything to recommend in The Wretched? Well, some of the practical visual effects used to realize the witch are fun. I got a good laugh out of the fact that they defeat the witch by just ramming a car into it. That actually could have worked as an intentionally unceremonious dark gag in a better movie (Sam Raimi could have worked wonders with that bit). In The Wretched, it’s just another underwhelming feature in a movie that’s mechanically going through the motions. The pandemic ensured that The Wretched was the one-eyed king of the land of the blind that was the summer 2020 theatrical landscape. But it’s such a poorly cobbled together movie that I doubt it’ll stick around in anyone’s memory in the months to come. 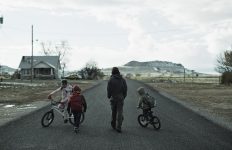 Film on the Internet: ONE FALSE MOVE→