Browse: Home / Year of the Month: Belated Comebacker on A Hard Day’s Night

A Hard Day’s Night doesn’t lull viewers into its world. It catapults them. Without so much as racking focus, we smash cut to the Beatles, Ringo, George and John, minus Paul, who’s under cover of a newspaper and a fake goatee, racing towards the camera, barely staying out of reach of the mass of young women as the titular song plays on the soundtrack. What the film seems to suggest is you can forget about these guys putting in a nine to five working on their career. They already have to work like a dog to stay out of the hands of their teenage fans. 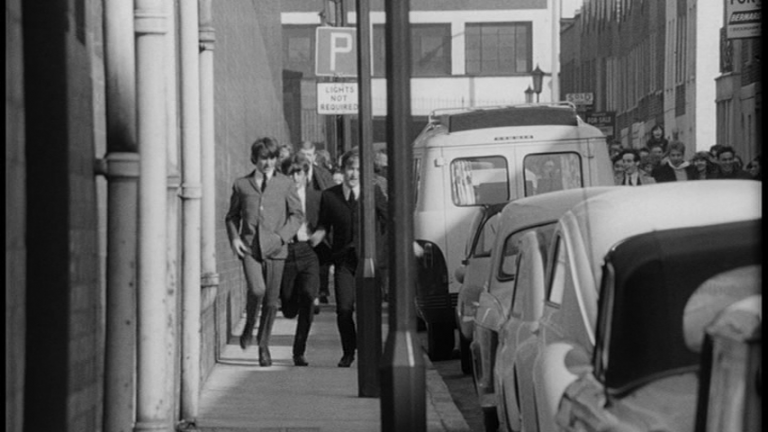 Released in July of 1964, A Hard Day’s Night went into production only a few months after their American debut on The Ed Sullivan Show. Starting that March, the film rushed the four young superstars through the British acting guild, Equity, the morning before the first scene was shot, according to Barry Miles’ book The Beatles Diary. The goal of this rushed timeline was to capitalize on their success, which, at the time, was viewed as limited, according to film historian Stephen Glynn’s book A Hard Day’s Night: The British Film Guide.

Given the small window of opportunity for releasing the film, in addition to handling four musicians with no prior acting experience, who would dare take on the mantle of director, shepherding this project to completion? Why, a television director, of course, one who was no stranger to working on the fly and crafting solutions to seemingly impossible problems.

For Richard Lester, the challenges of making A Hard Day’s Night were no different than the time spent learning his craft in America and Britain as a television director. However film edged out television as the superior medium in his eyes, since,“you can do a second take,” according to the book Spike Milligan: His Part in Our Lives, by Maxine Ventham.

Lester’s first feature film, It’s Trad, Dad! wore an exclamation point to match its energy, featuring extended musical sequences which had to be shot consecutively. Oftentimes, Lester averaged three musical sequences a day, pushing back towards the reliability of television production techniques. Three cameras were rolling at all times, which led to, “the basis of the technique that I’ve used, ever since,” Lester said in a series of interviews for the Criterion Collection’s video 2014 video essay Picturewise (part of the collection’s A Hard Day’s Night release).

Aside from Lester’s technique, another staple that helped the Beatles get along with the director was a shared sense of humor. According Howard Hampton’s essay “The Whole World is Watching,” John Lennon was a huge fan of one of Lester’s early works, the 30-minute comedy radio series The Goon Show. The rest of the Beatles also shared the sentiment of the program and its television successors, The Idiot Weekly, Price 2d and A Show Called Fred. The principle goal of the programs and the Beatles, according to Picturewise, was to undermine reality, something that was clear the moment the four of them get on a train, only to leap off it for the sake of a joke. 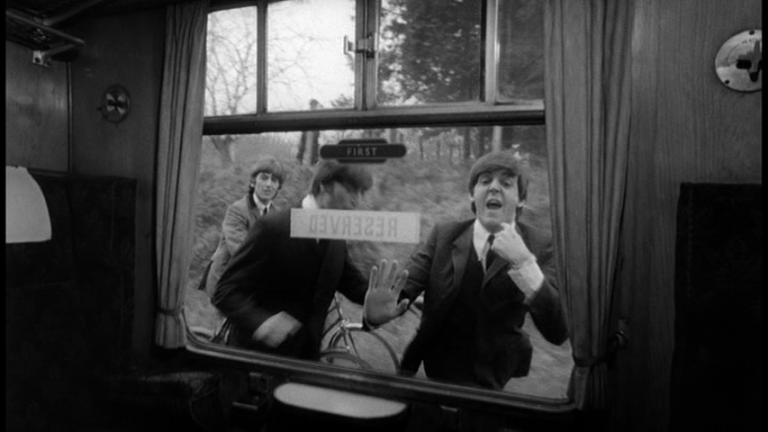 The film would often pile on with the gags, whether visual or verbal, creating a zippy, enthusiastic vibe that is impossible to refuse. My particular favorite scene is near the end, when Ringo, in a fit of pique, disappears from the studio before the final rehearsal. He wanders about the streets of London, chatting with a youth making the most of the post-war cityscape, while taking a number of photos. However, he ends up getting picked up by the local police after an attempt at chivalry goes wrong, while showing an attempt at the rule of threes in comedy goes right. 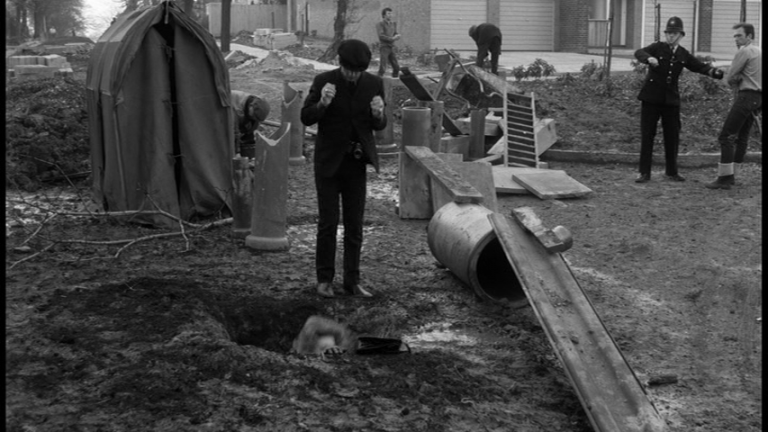 If you detect a whiff of silent film in these particular scenes, then it might be because of Ringo, who throughout the movie is portrayed as moody and unhappy. Lester was clearly willing to do anything for a joke, and Ringo was happy to play along, refusing to crack too many smiles on set, which gives this grouping of scenes a sneakily familiar feeling. He may not possess the same level of physical derring-do as Buster Keaton, which is understandable, given his first calling as a musician, but they both wore the same stoic facial expression, as if the only proper way to handle these indignities of life is by refusing to let the world see you sweat.

The remainder of the Beatles eventually helps spring Ringo from the station, after hearing the news from Paul’s “grandfather.” Played by the excellent comic actor Wilfrid Brambell, this supporting role is a standout among several other plum parts, not so much outshone by the Beatles, but contributing to the total wattage. Among other things, this grandfather is conniving, brash and, of course, clean, which was a play on the “dirty old man,” role from his sitcom, Steptoe and Son.

But the Beatles eventually reunite for the big concert, broadcast live by a nervous television director; a Richard Lester stand-in, if there ever was one, complete with a prominent bald spot. Here is where the film grammar, the style and shot selection start to feel very contemporary, with footage of the crowd literally going wild. 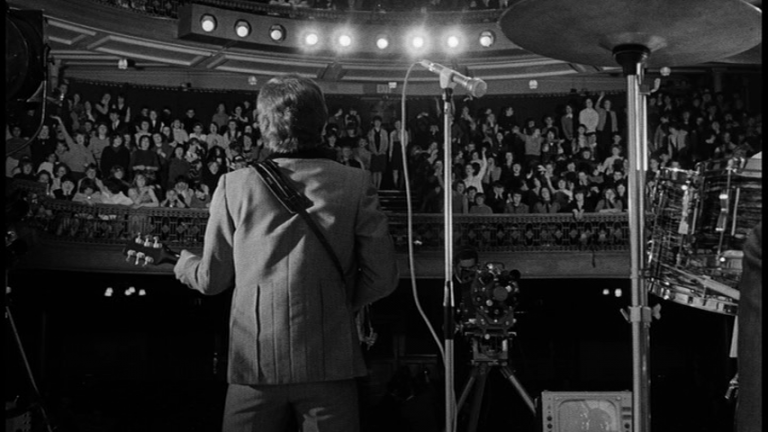 If this scene was shown to someone without a full appreciation or understanding of Beatlemania, they might fail to understand what made it so special, given its similar style to any other televised concert shown today. Little would they realize this is precisely the reason for its uniqueness, creating a style so indelible it would, much like the iconic performances in other movie milestones, create a whole industry of imitators. This is especially true during the dawn of MTV, which gave Lester an honorary citation as, “Father of the Music Video.” Lester, characteristically, requested a blood test to prove his parentage.

A Hard Day’s Night, even after 53 years, still feels incredibly fresh and lively. Part of that is a generosity of spirit, ensuring everyone either gets a scene to steal or a joke to tell. George ends up in an ad man’s office to provide focus group opinions on new styles. John talks to actor Anna Quayle about how little he resembles John Lennon, suggesting that she carries more resemblance to the famous singer than he. The success of these situations, and the patter of repartee, is not solely of Lester’s making, but Alun Owen’s, a Liverpool playwright who was able to nail the style and tone of the region, ensuring that the four Liverpudlians at the center of the movie would have access to familiar terms and cadences.

As for the other part that makes A Hard Day’s Night a classic, invention and style are definitely a component of it. One need not look far to see other pop rock documentaries, featuring artists such as Justin Bieber, Katy Perry, and Justin Timberlake to see similarities of style in the creation of these films, especially when they hit the stage to belt our their well-known songs.

However, the movies never move beyond this, suggesting their existence as nothing more than brand extensions, furthering the awareness of the stars without extra style to burn. Certainly, A Hard Day’s Night was also conceived as a way of ensuring there was another outlet for the public to contribute to the Beatles’ bank account, but part of the pleasure was Lester and Owen sneaking in a bit of art into the proceedings, ensuring it wasn’t only a commercial property, with the Beatles happy to go along with it. The movies of today that feature musicians may be more of an airbrushed affair, but A Hard Day’s Night will continue to endure, featuring the four of them still in their youth, willing and eager to be inventive. The kids are all right.