Browse: Home / Year of the Month: DON’T BOTHER TO KNOCK

Don’t Bother to Knock is an entertaining but minor suspense film. Part of its appeal now stems from it being minor: if it’d been more influential, its oddities would feel more familiar. As it is, it has a refreshing, offbeat charm.

It owes the rest of its appeal to Marilyn Monroe. This was her first starring role and one of her first dramas, and any awkwardness, stiltedness, or anxiety that might bleed into her performance only serve to enhance it. She plays Nell—and even that name, as plainly ill-suited as it is, works to her advantage. Nell is, after all, a young woman who has been pressed—by upbringing and by misfortune—into a particular mold, drab and pathetic and dead-ended. Her fantasizing is more vivid to her than her real life is; Marilyn plays Nell, who wants to be Marilyn, and in every frame, we can see Nell’s truth—as queasy and nerve-jangling as it is—alongside the reality. It sucks us into her inner world and adds a dissonant, minor-key note to an otherwise dated and conventional—albeit reasonably sympathetic—treatment of mental illness. She’s equal parts luminous and troubling, and if you only remember one part of the film, it’s likely her. 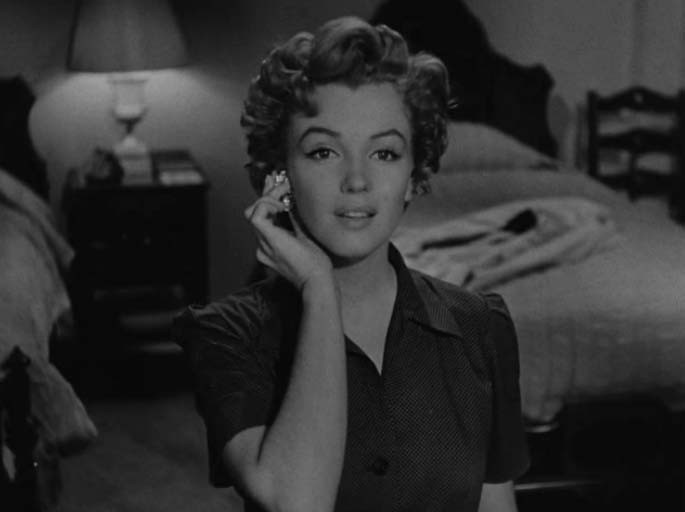 But if you remember a little more than that, you might recall the curiosity of the setting. This is a domestic suspense film set in a hotel, a place of professional domesticity. We have a story of childcare arrangements, nosy neighbors, and family relationships, but it’s happening in a place where all this is mostly designed to be temporary.

A fact the film is well-aware of. As we move in from the establishing shot of the McKinley Hotel, we pause on a display placard on the desk:

Make this more than a hotel. Make it YOUR HOME.

A place where you never have to knock? Making a hotel your home requires, of course, assuming and expecting that strangers will take on the responsibilities of family and community. Don’t Bother to Knock is like a case study in how that idea plays out.

It’s at the core of the problem bar singer Lyn (Anne Bancroft, in her debut role) has with her boyfriend, pilot Jed (Richard Widmark): “You’re sweet and you’re fun and you’re hard,” she says, and that lack of empathy and compassion is significant enough to her that she dumps him for it. He takes no responsibility for the people in his life, never readily assuming any lasting or serious connections. If you treat friends like acquaintances, how do you treat strangers? 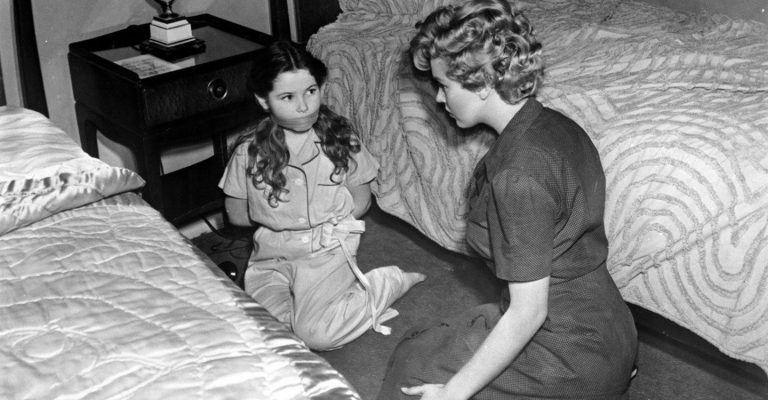 Jed is a hotel person, not a home person: literally and emotionally, he’s just passing through. That makes him our perfect viewpoint character to follow through the different social spheres of the hotel and their different levels of intimacy. He’s joined in that role by Eddie (Elisha Cook Jr.), the nervous and obsequious elevator operator, so simultaneously meek and relentless that he’s hard to take. Eddie has—as he’ll tell you—worked in the hotel for years, and he’s familiar with every bit of it. This is his home, so it’s no surprise that he brings his family into it, arranging for his troubled niece (Monroe’s Nell) to get back on her feet by doing an evening’s babysitting.

Eddie exists to blur the lines and incite the plot. To the Joneses (Jim Backus and Lurene Tuttle), his mildness and longevity at the hotel makes him trustworthy enough to supply a babysitter—but, of course, he doesn’t reveal that he doesn’t quite trust his niece’s stability. Even for a hotel mainstay, family is still private business. Even when this place is home, these people are still strangers.

Peter Jones is winning an award for his editorial, so he and his wife, Ruth, will be downstairs all night, enjoying a lavish convention ceremony that long-term hotel residents like the elderly Emma Ballew (Verna Felton) resent. (Who are these people traipsing through her home?) The Joneses accept Eddie’s niece as their night’s babysitter. What’s the harm in letting Nell watch over little Bunny (Donna Corcoran) for a few hours?

But Nell and Bunny are a bad match. For all Nell’s beauty, she’s pitiful, exuding tension and fragility. Bunny is a perfectly decent kid, but she’s forthright and sure of herself in a way that Nell’s flimsy, brittle authority can’t stand up to. Every time Nell answers one of Bunny’s questions, Monroe makes you feel how it takes all of her strength. Trying to embody a kind of normal, healthy authority—the kind we find out that she’s never really experienced—exhausts her. She can’t stay grounded in the world Bunny effortlessly inhabits, and she just wants the girl to sleep already.

That Bunny is awake becomes a cardinal sin to Nell, rousing first anger and then resentment. The most chilling sight in the film isn’t Nell apathetically letting Bunny half-crawl out the window or her having left Bunny bound and gagged, it’s her fervent, intent expression as she asks Bunny, “Do you have a doll? …What if it cried and pestered and spied on you? You’d get rid of it, wouldn’t you? You’d have to.” Anyone who won’t take their place in Nell’s fantasy needs to be an off-stage object; Bunny needs to sleep so Nell can dream uninterrupted. 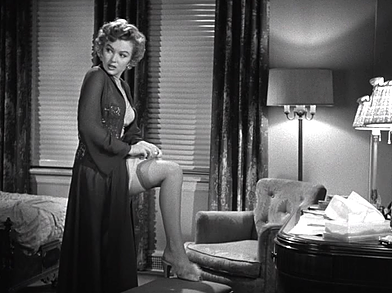 And dream she does, donning Ruth Jones’s glamorous negligee and perfume and jewelry—her careful pronunciation of the perfume’s name, Liaison, is delicate and heartbreaking, as is her eagerness to tell her uncle that she put the drops of perfume behind her ears, which she clearly regards as a kind of personal triumph. Eddie, naturally, just wants her to get out of those clothes as soon as possible. Eddie doesn’t do fantasy outside of an internalized front-line service bonhomie: everything’s fine here, really. He’s so real to Nell that he blocks her, irritating her and making it impossible for her to slip away the way she wants to.

Real family is too much trouble, so she needs fake family—a stranger, Jed, whom she can make over in her mind as she needs to.

At the start of the film, Jed is more used to strangers anyway, so he seems to slip right into the role. Rejected by Lyn, he takes immediate, flirtatious refuge with Nell, whom he spies across the hotel’s courtyard, twirling around in her borrowed negligee. When he calls her room, he even at first gives her a fake name—Billy—dipping into fantasy to keep this from touching his real life. He’s as untouchable as Lyn thought.

But as the unusual circumstances bring him face-to-face with the depths of Lyn’s unhappiness and force him to take responsibility for Bunny’s safety, Jed grows and solidifies. He becomes not only more of a person—one who has to ultimately insist that he can’t just vanish into the role of Nell’s dead lover—but a more connected one, one who easily and naturally calls Lyn his girl and confesses that he’s in love with her. The Jed/Lyn reunion is the conclusion of the film, with the two brought together and saved by the evolution of Jed’s empathy.

It’s a good arc, and it’s thematically satisfying, but it throws off the shape of the film. The ending is gently happy, reaffirming the film’s belief in a kind of E.M. Forster mandate to “only connect,” but there are emotional intensities elsewhere that can’t be satisfied by an ending so narrowly focused on the lovers. It nags that the last shot isn’t of Nell in her diminished, heartbroken state, saved only by having her tragedy revived. As it turns out, she has no home, and so she has to go.