It’s almost as cliché to point out that history doesn’t divide itself neatly by decade as it is to split it up that way in the first place. But what’s surprising is how often transition points do line up along those lines. Just look at the cartoons Warner Brothers released in 1950. The bold, abstract shapes of midcentury modern design were beginning to flatten the cartoons’ look after decades of trying to get as close to three-dimensional reality as possible. With classics like Rabbit of Seville and The Scarlet Pumpernickel, Chuck Jones was ascending to his position as the studio’s greatest director after spending most of the thirties and forties as a second-tier (and sometimes outright terrible) hired hand.

And that’s not the only transition you can see in The Scarlet Pumpernickel, where Daffy shows off a new script to J.L. Warner, where he plays a swashbuckling action hero because he’s “sick of comedy, woo hoo, yuk yuk” (Oh, Daffy, if you only knew…) but falls flat on his face in every feat of derring-do he tries. The narrative among Looney Tunes’ fans and scholars (yes, there really is such a thing as Looney Tunes scholarship) is that this is the moment Daffy changed from a happy-go-lucky trickster to, well, the exact opposite of that. That’s another one of those historical narratives that’s a little too neat to fit into reality. The animators began giving Daffy his comeuppance in the end as far back as You Ought to Be in Pictures in 1940. Some earlier cartoons, like Draftee Daffy, where he tries and fails to escape the “little man from the draft board” could have been inserted into the post-Pumpernickel with almost no changes.

And it didn’t happen all at once. Daffy may not be bouncing off the walls yelling “Woo hoo!” in The Scarlet Pumpernickel, but he takes all his failures with the same bubbly attitude as he took his earlier successes. Other cartoons after that would keep using the daffy Daffy persona or try to meld it with the loser one for years after this. And it didn’t stick as well with Warner Brothers as it did in the popular consciousness — every toy and media spinoff more or less ignored it for decades, and revivals from Space Jam to Looney Tunes: Back in Action to the new HBO Max shorts keep trying to get Daffy back the way he was.

But it’s pretty easy to believe everything changed in 1950 when you see he starts the year singing a song about how much he loves being crazy in Boobs in the Woods and ends it getting the snot beaten out of him by a toddler in His Bitter Half. The pop culture image of Daffy is the loser yin to Bugs Bunny’s unbeatable yang. But in the forties, he was Bugs, but more so. He didn’t just defy the laws of physics — he flaunted them, like in Boobs in the Woods where he can summon a tiny raincloud by saying “I think it’s going to rain.” His antics, like his voice, all happened at twice the speed.  The wabbit’s introduction in 1940 started to make Daffy redundant, and maybe it was to keep both of them relevant that Daffy kept getting less capable and Bugs became more hypercompetent until they were on opposite poles.

You can see Bugs developing in these cartoons. In his memoir, Chuck Amuck, Chuck describes how he struggled to get a handle on the character, saying of Bugs’ creator, Tex Avery, “But I wasn’t Tex (‘More’s the pity,’ says the chorus). I couldn’t animate a character if I didn’t understand him.”

So he began giving Bugs understandable motives instead of just causing chaos for the heck of it. In Homeless Hare, he tries to complain about the construction going on above his rabbithole and declares war when the thuggish foreman gets violent instead of listening. In 8-Ball Bunny, he gets an innocent to defend in a little mini-epic as he treks across the globe to get an adorable little penguin home (“The South Pole? Oooh, I’m dyin’!”).

Some of the older cartoons are hard to watch because they make Bugs look like a bully. By seeing him at the mercy of bigger bullies (something Chuck made literal with towering bad guys like the monster in Hair-Raising Hare and the bull in Bully for Bugs), we don’t just laugh at him, we get invested in seeing him win.

Nothing else the Looney Tunes crew did in 1950 can stand next to Rabbit of Sevillle. I must have seen it dozens of times since I was a kid, and it never gets old. If anything, it seems to be made for that kind of viewing. 1950 was the tenth year of Bugs Bunny cartoons, and it must have been challenging to find new ways to rejigger the formula by then. Rabbit of Seville embraces the familiarity. As Elmer Fudd chases Bugs into an opera house performing Rossini’s Barber of Seville, the chase almost turns into a ritual.

Some of these cartoons are pure chaos, but the greatest thing about Rabbit of Seville is its precise orderliness. Just like an opera, every step is rehearsed, timed to the music. All the greatest hits are here — Bugs seduces Elmer in a dress, ties his shotgun in a knot, looks at the camera as if asking us how dumb this guy can be.

It’s also a showcase for one of Chuck’s greatest skills. Other animators would put their characters through full-body flailing to get a laugh. But Chuck gets much more effect out of their facial expressions, which can be distinctive and even downright bizarre. Just look at how Bugs screws up his face when he gets to work massaging Elmer’s shiny scalp. 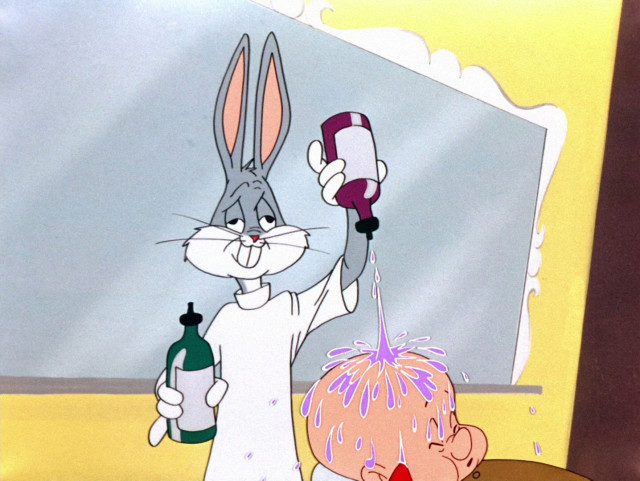 But if you really want to see where Chuck’s career was headed in 1950, you need to look at a more obscure cartoon. The Hypo-Chondri-Cat’s a pretty simple story where two little mice discover the cat who wants to eat them’s a hypochondriac and turn his paranoia to their advantage. But Chuck fills it with all kinds of strange, abstract images as the cat turns psychedelic colors when the mice describe his complexion and falls into a nightmare when they pretend to operate on him and he passes out on the operating table. 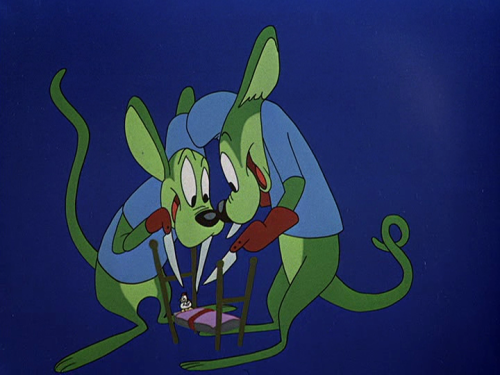 Chuck would continue exploring this style throughout his career. As rival studio UPA — which rose to the A list in 1950 with its Oscar for Gerald McBoing-Boing — threatened Warner’s dominance with its modern art influences, Chuck got the license to take these ideas even further and develop a signature style that was totally different from his peers.

Robert McKimson is usually remembered as the least of the classic Looney Tunes directors. That’s not totally unfair — but it’s more a reflection on the quality of the talent he was surrounded with than his own. One of director Bob Clampett’s star animators, McKimson took over his unit when he left in 1946.

He absorbed Clampett’s more-is-more approach, and his cartoons have the most animated animation of any Warners released after Clampett’s departure. McKimson’s characters don’t just gesture — they gesticulate. They don’t just talk — they declaim. They all have a distinctive look, all mouth and jowls, even the ones created by other directors. It’s easy to see McKimson’s influence on later creators like Don Bluth.

His most memorable creation, the Tasmanian Devil, was still a few years off. But you can see the beginnings of the character in Hurdy-Gurdy Hare, which pits Bugs against a gorilla who shows the same combination of animal savagery and animal stupidity and has Mel Blanc trying out a first draft of Taz’s babbling grunts and growls. 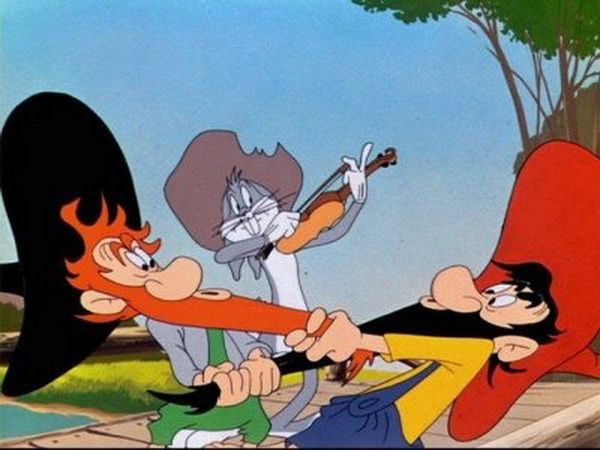 Hillbilly Hare is McKimson’s masterpiece. It starts out as a pretty ordinary story of Bugs traveling through the South and getting in trouble with two rednecks named Curt and Punkinhead. But then Bugs poses as a fiddler and launches into one of Looney Tunes’ most inspired extended gags, one that lasts half the whole short. He leads the hillbillies out into the countryside where they act out all of Bugs’ increasingly bloody lyrics:

Grab a fence post, hold it tight,
Whomp your partner with all your might!
Hit him in the chin! Hit him in the head!
Hit him again, that critter ain’t dead!

It’s hard to say what’s funnier — the lovingly detailed and over-the-top carnage we see, or the carnage we don’t see, as the action cuts back to Bugs whenever it gets too horrible. That’s part of the greatness of Looney Tunes. As much as it’s synonymous with, and even invented, gonzo cartoon exaggeration, a lot of the funniest stuff is also the subtlest. Sylvester grimacing at the camera as he rolls downhill in Canary Row. The big bulldog in Dog Gone South kicking its little legs in the air as it runs. The hypo-chondri-cat adding an extra syllable to “ath-a-lete’s foot.” Animators have been trying for most of the past eighty years, but there’s just nothing like these cartoons.

There’s nothing like BurgundySuit either, so why not donate to his Patreon?

Rabbit of Seville, The Hypo-Chondri-Cat, Hurdy-Gurdy Hare, and more of these cartoons are available on HBO Max