William Wyler’s The Letter is almost a film noir blanc, its traditional adultery-murder-blackmail plot turning the screws on its characters even as the choice of setting questions some of that sense of existential doom. You get the feeling it would take more than a little murder to undo this claustrophobic little community of well-to-do white expatriates.

The film begins with Leslie Crosbie (Bette Davis) emptying a revolver into a man stumbling out of her house and falling down her front steps. Several of the Crosbies’ Malaysian laborers watch her coolly finish off the victim, Geoff Hammond, by shooting him several more times once he’s flat on the ground. She’s not perturbed by having so many witnesses–all she does is send a manservant off to retrieve her husband from one of their rubber plantations. Tell him, she says, that there’s been an accident.

It makes sense that Leslie isn’t worried about what the Malaysian men could tell of her demeanor or her actions. No one, as it turns out, will ask them anything about it. Her lawyer, the principled Howard Joyce (James Stephenson), rules out the possibility that the prosecution will ask the servants to testify; they would only come into it if Leslie’s prospects were already very bleak. They’re all acting under British law, having ordered the country so that none of its native citizens can easily rise to lawyer, let alone judge, and they fundamentally don’t care about non-white opinions of white behavior. Leslie has killed a white man–and a well-liked one, at that–but it helps her case that Hammond broke the racialized rules of fair conduct first. He married a native woman, implicitly setting her up as the equal to the other expatriates’ white wives, and everyone who questions Leslie understands at once why she claims this made her cut Hammond out of her life entirely. When she expresses visceral disgust of Mrs. Hammond–“she was all covered with gold chains and bracelets and spangles, her face like a mask”–the other characters by and large understand it as entirely reasonable racial revulsion that says nothing about Leslie’s character and nothing about her relationship with Hammond.

The image most associated with Leslie, and one that keeps returning, is in some ways her best weapon and certainly her best defense: not the revolver (she does have to account for its use, establishing that she has her husband’s permission, that he was the real provenance of it being in the house) but the lace she’s knitting. She claims to have been working on it when Hammond arrived–and indeed, it’s strewn across the floor, prompting an idealistic young man to fawn over its delicacy. The film uses the lace not only as a symbol of the white feminine fragility that Leslie deliberately tries to evoke and not only as her conscious prop but also, more revealingly, as a genuine psychological retreat for her. Whenever she’s most stressed, she returns to her lace, as if there’s some fundamental reassurance there. She’s selling an image, yes, but she believes in it, too, and she takes comfort in it, at one vulnerable point literally cloaking herself in it. 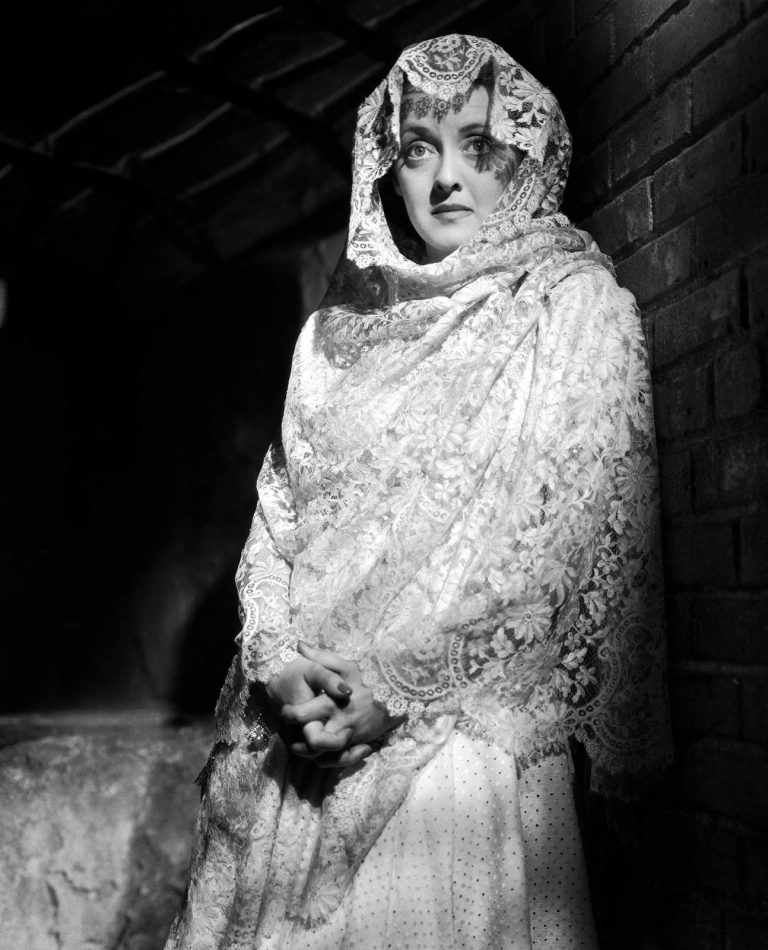 Leslie claims Hammond tried to rape her, and that she shot him to protect herself. The truth is that they’d been having an affair for years, and then he drew away from her when he fell desperately in love with the woman he married, a woman he insisted was the only one he’d ever cared about. Leslie implicitly threatened him to get him to come to her that night–that threat forms the body of the titular letter, the one that must be bought from Mrs. Hammond if it’s to be kept away from the prosecution–and when he turned up only to refuse her again, she shot him.

The film twists around like a Möbius strip here, uneasily playing the noir off the blanc: a wealthy white woman, One of Us, must be innocent, but at the same time, the genre framework is one in which women tend to deceive men and cynically disbelieving them is an act of heroism. Howard Joyce, the moral center of the film, follows that twist sure-footedly; he’s able to question Leslie’s innocence partly because Hammond’s whiteness, for him, overrides it. Hammond, for Joyce, hasn’t completely forfeited his community standing–he’s still not only One of Us but One of the Boys, one who is known to be charming and appealing to women, and if Joyce can’t imagine Hammond doing such a thing, well, could Hammond really have done it? This is a movie about guilt or innocence being decided not in the courtroom–the verdict is already a foregone conclusion by the time we even see the trial–but in a tight-knit community that protects its own, one where opinions matter just as much as facts. When Joyce eventually works to save Leslie from a guilty verdict despite his certainty of her guilt, he’s not really acting as his client’s lawyer but as a friend–his loyalty to Leslie’s loyally unperceptive husband, Robert Crosbie (Herbert Marshall), is the one thing that can trump his own ethics and make him compromise himself and his career.

That makes whiteness, in the film, partly a matter of who you know; it’s inescapably entangled with class and the closeness of this particular expatriate community. It’s also about money: who needs it and who can come up with it. Joyce is able to buy the incriminating evidence against Leslie only by nearly cleaning out Robert Crosbie’s bank account. But it’s more than that. In the end, it’s something as finely-knit as Leslie’s lace, and it works through their society like a web, catching her every time it seems she might fall. At first, she worries that she’s going to suffer, no matter how good her story is or how much it’s believed, because murder charges will still mean her waiting for her trial in a jail in Singapore. But when we see the jailed Leslie, her life has changed remarkably little. She still looks fresh, her hair still immaculately styled. She’s wearing her own clothes. She has a personal attendant, a prison matron who adores her. She’s allowed to be let out of prison for a while to accompany Joyce on a journey to the Chinese Quarter. Everyone is terribly apologetic to her about everything she’s suffered, and her social capital doesn’t suffer at all.

Leslie is the still center of the film, taking one action at the beginning to set the plot into motion and then forced–by both circumstances and strategy–into passivity. Davis makes this passivity interesting and watchful, crafting Leslie into a real character rather than a standard-issue femme fatale. When she and Joyce go on their errand to the Chinese Quarter to purchase the letter, she tries to joke with him about it, and he cuts her off brusquely: “Be flippant about your own crimes if you want to, but don’t be flippant about mine.” She asks him why he ‘s studying her so closely, why he wants to understand her, asking, “Because I’m so… so evil, is that it?” She’s hesitant to use the word, but she’s calm–she’s not blaming him for thinking that he’s evil but rather testing the sound of it, weighing it on her own mind and trying to decide for herself.

Joyce can and does act, even as he hates the steps he agrees to take. It’s a great performance from Stephenson as he plays a man convinced he’s losing some part of his own soul. More importantly, it’s through Joyce that the film achieves a great sleight-of-hand: watching Joyce compromise himself is a distraction from the question of who else in the film is doing the same. 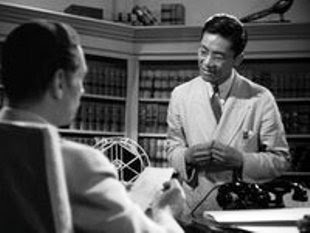 Because, as Leslie herself points out, the evidence against her couldn’t be bought if someone weren’t prepared to sell it. There’s a quiet network of Malaysian connections beneath the privileged white society the film focuses on, and it works like Chekhov’s gun on the mantelpiece. The Crosbies lose a servant on the night of the murder as he goes to find Hammond’s widow and bring her to see the body–no one else seemed to think of her at all, and they assign no value to her grief. It’s Joyce’s Malaysian law clerk who brings forth the existence of the letter and calmly puts a price on it, all without losing the obsequious vibe that Joyce once found endearing and now can see is only a paper-thin cover for a man he’s never really tried to understand. What does the clerk get out of this?: “Two thousand dollars, and the great satisfaction of being of service to you and to our client.” There’s a strongly grounded doubt in the system that all these characters have: they know that the law will not work in their favor, and they’re skeptical that it could even work in the interests of justice. Would Leslie go to prison if that letter turned up? She believes so, as does Joyce–but it’s hard to blame Mrs. Hammond for trading the possibility of white punishment of a white woman for cold hard cash and a chance to personally lash out at Leslie, dropping the incriminating letter at her feet so Leslie has to bend to pick it up. And, of course, there’s further networked, assisted retaliation later on, beautifully staged. As the expatriates celebrate Leslie’s acquittal inside, grief and fear and a sense of fatalism draws Leslie out to the garden and her death at Mrs. Hammond’s command. It’s a justice that plays out unnoticed, in the shadows, beneath the attention of the official law–a policeman stops them on their way out, but lets them go–but it’s real all the same.

Which gives The Letter something of the fundamental unease of occupying another country. For all the characters can count on the protection of their privilege, and as often as that’s enough, they’re still not on their home turf. They’re living in a glass bubble in the middle of a society they don’t know and cannot, despite their beliefs, ever completely control. And so the party goes on, with a corpse out in the garden.

The best original songs of 2004, according to the Academy→