Browse: Home / 65 Years Ago Today, Peanuts Debuted And Changed Both Comic Strips And The World Forever

Growing up, I absolutely loved pop culture (shocking, right?), but it was hard to discover pieces of media that really spoke to me, that really understood what I was going through. Being bestowed with Asperger’s Syndrome from birth seemed to leave me at a disadvantage at every turn, especially in the realm of social activities. Looking for refugee in films, TV shows and books, it was near impossible to find something that resonated with what I was going for. Oh, it was typical to see characters experience bullying, but most of the time, there was a neat & conclusion involving either competence for the antagonistic characters, or more likely, the bully and the bullied character becoming friends.

And then I discovered the book Good Ol’ Charlie Brown, a 1957 piece of text that reprinted a large number of Peanuts comics from the mid-50’s. My adoration of the melancholy A Charlie Brown Christmas led me to read the book, which was brimming with comics that both tickled my funny bone and led me to finally find a character who understood the turmoil I went through as a kid. Whereas that wonderful Charlie Brown Christmas special (one of the greatest things to ever air on television in my book) only aired once a year, here was but one of a myriad of books I could flip through any time of the year. 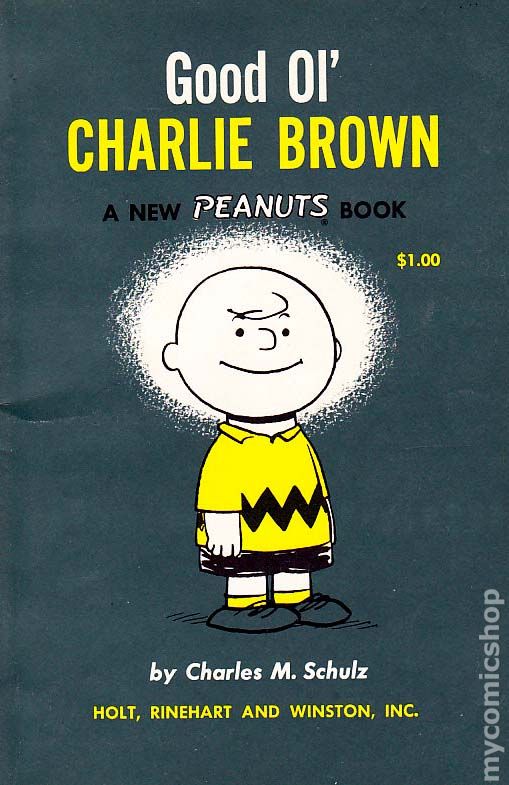 Soon, I accumulated each and everyone of the Complete Peanuts books from Fantagraphics, which preserve the work of Charles M. Schulz in exquisitely designed tomes containing some of the most important pieces of pop culture ever created. Hell, the underlying woe that inhabits each panel of the comic even carries through in its name. The name Peanuts was chosen by ad executives against the wishes of Mr. Schulz, who would later declare the title “…lacked dignity”. But isn’t that a fitting tale for the title of a comic dealing with a kid who can’t fly a kite or hit a baseball? The concept of grappling with the crestfallen realities of life that permeates the entire comic even manages to influence the very title of the work itself!

All too often, childhood is depicted as a serene place in pop culture, a time of simplicity and joy. But to quote the star of another incredible comic strip: “People who are nostalgic about childhood were obviously never children themselves.” The unfettered cruelty of children is unleashed upon not only Charlie Brown, but also supporting characters like Pig-Pen, Linus and even Snoopy. This is a world, much like our own, where orderly conclusions to turmoil don’t exist, where bullies win and anguish is all that greets one in the morning.

And yet, despite, every challenge he faces, Charlie Brown goes forth and confronts the trials life tosses at him without hesitating. Yes, baseball hasn’t been his forte before, but maybe this year will be the one where he can help his team win. This is the thought process of a man who is very much accustomed to a dolor life, but also a man who is similarly well-versed. Not only did Peanuts let me know I was not alone in feeling the way I did, it also provided me a chance to see the virtues of tenacity. Charlie Brown may lose, but he’s not gonna let the failures of the past stop him from facing any challenge that crosses his path.

In addition to covering dramatic territory that I personally found emotionally resonant, the illustrations by Charles M. Schulz in these comics is also incredible to look at, especially in the form of those aforementioned Complete Peanuts books which allow one to examine how his art changed over the years. I’m personally most attached to his drawing style that inhabit the late 50’s and the entirety of the 60’s, but the beauty of Peanuts is that a question regarding its art, or any other aspect of the strip (favorite characters, favorite comic, favorite Snoopy alter-ego) will produce countless different responses depending on who you ask. That’s the virtue of existing in comic strip form for so many decades as well as transcending into numerous other forms of storytelling like television.

You don’t just endure for so long in this o’l world without holding some sort of artistic value, and for Peanuts, I think the reason its managed to stick around throughout the eons is because of why it appealed to me; it’s melancholy tone provided a stark contrast to conventional tidy storytelling. Sentiments of dejection are felt by all in this world, and in the midst of such emotions, at least from my experience, one can’t help but feel like they’re the only one who knows what it feels like to experience such grief.

But Peanuts not only assured us all through Charlie Brown’s strife that our own despondency was no anomaly, but seeing other individuals respond to the various plights of the character serves as a reminder that no one is alone in experiencing grief. There are others out there suffering the same sort of social ostracization and sorrow, who also can relate to the struggle of that o’l blockhead Charlie Brown. Growing up, that realization of not being the only one experiencing such downtrodden emotions stemming from my struggles with adjusting to Aspergers gave me hope, and even today, that concept of not being alone is enough to get a smile to creep across my face. It’s similarly impossible for me not to get a goofy grin whilst thinking about some of the funniest comics Schulz ever created.

65 years ago, Charlie Brown strolled on into American pop culture. As if it even needed to be said, the landscape of comic strips, pop culture and the lives of millions would never be the same again.