It’s hardly surprising that Joe Breen insisted they change the name. He would’ve changed the murder weapon, if he could have. Frankly, I’m astonished that he allowed the adaptation at all, given, well, everything. But if you look at original period advertisement for the movie, you will note that it doesn’t mention the book or its author, which it pretty much wasn’t allowed to. After all, the original novel has Gypsy Rose Lee herself as the narrator, and in the movie, she’s given a different name and played by Barbara Stanwyck. It’s certainly possible to find posters that emphasize the connection, but Lee is uncredited in the film itself and in the original posters.

Dixie Daisy, born Deborah Hoople, is a stripper. She works at the burlesque house owned by S. B. Foss (J. Edward Bromberg), which is about as derelict as you’d expect. There’s a lot of backstage drama—some of the strippers get along, and some don’t. Particularly annoying are “the Princess Nervena” (Stephanie Bachelor) and Lolita La Verne (Victoria Faust). Dixie’s best friend is GeeGee Graham (Iris Adrian), and she is being wooed by a comedian, Biff Brannigan (Michael O’Shea). He even helps her out when the show gets raided by the police.

So far, just a normal life in a burlesque house. But during the raid, Dixie is attacked. In order to keep the show going, Foss gives all the performers a stake in the theatre, and he even agrees to replace a faulty piece of plumbing in the women’s dressing room. Unfortunately, at its grand opening, Lolita is found murdered in the bathroom. It isn’t the last murder, either. Dixie gives an inspiring “show must go on,” heavily larded with “besides we co-own the theatre right now.” The police are not all that interested in solving the murders of a bunch of strippers, so Dixie starts to investigate.

Since so many people make a fuss about the whole thing, let’s discuss this. Gypsy Rose Lee almost certainly wrote the book. From the time it debuted, people speculated it was really by her friend Craig Rice. Rice did work on the movie’s script, but documentation proves that she did not write the book. Lee may or may not have had the help of Janet Flanner, pen name Genêt, but the evidence proves that Rice didn’t write it. (On a personal note, let me express my delight to discover that Flanner’s mother used to live a block from a house I lived in as a very young child, albeit probably well before I lived there.) Mostly, it just seems that no one believed Lee—who admittedly had an education that could charitably be called “sparse”—could write a mystery.

Another fun note is that the book is quite explicit that the thing that doesn’t work is a toilet. People familiar with Joe Breen will know what a sticking point that is. You could believe, watching the movie, that it was a sink that was the problem, because Joe Breen was so opposed to bathrooms and their use that you couldn’t even show a kid with an uncovered diaper. Psycho got away with a flushing toilet by making it a plot point, but the movie is vague enough to avoid mention. Joe Breen had more power in those days, after all.

The mystery is fun and light enough, honestly. It seems like a weird thing to say about a double homicide, with two different attempts on the main character, but if you’re watching mysteries, you’re going to see that. As mysteries go, it’s not a bad one, and it’s easy to follow. Maybe the solution is a bit out of left field, but it also accentuates the burlesque-positive nature of the story, something that’s likely to have just slipped by Breen entirely.

Arguably, the movie has a strong message of class solidarity. The great failing of “Princess Nervena” is that she’s trying to be more aristocratic than she is, than the whole lot of them are. One of the problems with Lolita is that she’s fighting with the waiters at the Chinese restaurant next door—their break area overlooks the women’s dressing room, and Lolita assumes that they’re spying on the women instead of just trying to get a breath of fresh air. The workers end up sharing in the proceeds of their labour by getting shares in the theatre.

The book is solid writing, a good look at the behind-the-scenes world of burlesque through the lens of mystery. The movie is lighthearted fun; we see a few numbers made as tame as Joe Breen could get them. Stanwyck gets a show-stopping musical number that alludes to the original title, “Take It Off the E-String, Play It On the G-String.” I’m curious what could be made of an adaptation that’s allowed to get into the bits not allowed in a studio film from the ’40s, but it’s definitely worth checking out the version they were able to get made.

Next month, we’re going back to Disney for The Apple Dumpling Gang, one of ten Disney movies made by Iris Adrian at the end of her career. Help finance future columns by contributing to my Patreon or Ko-fi!  I’m also up for suggestions for future columns. 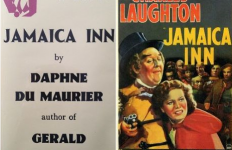 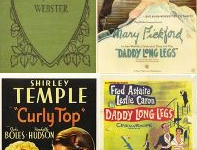 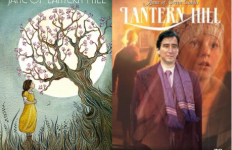 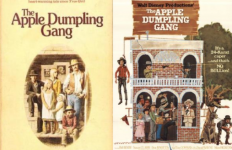