Peter Dinklage was once asked what his ideal role was, and he said, “The romantic lead who gets the girl.” And damn it, why shouldn’t he get that part? I put him on the schedule because I was watching that new Sesame Street clip he’s in and was impressed by one facial expression—I’ve long been open about the fact that my weakness is non-verbal acting. But I’ve also seen any number of other things he’s done where I was impressed with his acting ability, and I didn’t actually watch Game of Thrones. I’m sure he’s great in that, but it’s yet another role he got because of his condition, and I think he deserves more from his career.

His first film role was in Living in Oblivion, where he plays the guy hired to be a dwarf in a dream sequence because dwarfs make a dream sequence all creepy and weird. He insists that even he doesn’t dream of dwarfs, and what is this crap? And indeed, part of the reason it took as long as it did for Dinklage to have an acting career is that he refused that sort of role. He’s never played an elf or a leprechaun or what have you. He’s played the occasional part where he’s mistaken for something like that, but never the part itself, except Trumpkin in Prince Caspian and Eitri in Infinity War.

And okay, one of the things that bothered me in Days of Future Past was that not one person commented on his size, which felt wrong for a movie set in the ’70s. I actually thought he did a really good job in the role, and not just because I have this elaborate head canon about how he’s mad that he doesn’t have a Cool Mutation, just one (achondroplasia, Dinklage’s specific condition, is caused by spontaneous mutation in 80% of cases) that affects length of bone and gives you a ten-year-shorter-than-average life expectancy. But it still felt as though someone should actually say something disparaging about him, and no one ever did. It bothered me.

And, yes, it bothered me even though I also feel as though he needs to have more roles where his size isn’t an issue. That may seem contradictory, but there we are. The model I’m specifically thinking of is The Angriest Man in Brooklyn, a role I’m pretty sure wasn’t actually written for a little person, where Dinklage plays the brother of the title character, himself played by Robin Williams. The movie doesn’t really make a point of that except for one scene, where they’re arguing on a staircase and Dinklage is on a higher stair so he can look Williams in the eye. It’s a brief acknowledgement, but enough for the viewer to say, “Yeah, this is a thing,” but it’s not something we’re bothering to dwell on.

He should also have at least one role where he plays the romantic lead who gets the girl. That he isn’t considered for them despite being one of the most popular leads on one of the most popular shows of the last decade is disheartening. This is part of why I find the “only people it’s okay to make fun of” rhetoric so tiring. So okay, maybe people would feel bad about making fun of Dinklage’s size, but that doesn’t mean he doesn’t suffer from discrimination because of it. He’s a fine actor who needs to get roles that aren’t written for “that talented little person.” I’m sure he’d agree with me on that.

Keep my kids in Sesame Street; consider supporting my Patreon or Ko-fi! 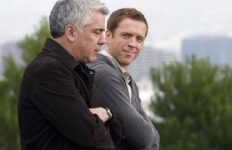