What is the closet, and why are there still people in it? Why are teenagers still growing up in fear of coming out to their parents? Modern pop culture would have you believe that, barring an ultra-religious background, teenagers everywhere are living out loud and proud, with a certain amount of disdain for everybody who gives them shit for it. But, this isn’t true. Yes, the LGBTQ has made a lot of progress in out public acceptance, but there are still heavy signposts that can keep one in the closet until its far too late.

High school senior Oscar Madly (Connor Jessup) is a closeted daddy’s boy living with his emotionally stunted father, Peter (Aaron Abrams), while retaining visitation with his mother, Brin (Joanne Kelly), and her new square family. He spends his time working at a hardware store and developing movie makeup skills using his best friend, Gemma (Sofia Banzhaf). But, the only soul to know his secret is Buffy, his hamster (voiced by Isabella Rossellini).

Stephen Dunn is just as focused on creating a detailed assembly of Oscar’s closet as he is of destroying it with the crisis moment. As an adolescent, Oscar witnessed a fatal gay bashing, which was subsequently reinforced by Peter’s casually bigoted comments while watching the news. Peter constantly pushes Oscar into developing into a butch heterosexual male, even as Oscar pointedly never fits the mold. The closet is a survival skill until it becomes an impediment to happiness.

Oscar’s crisis comes in the form of a hunky new worker at the hardware store, Wilder (Aliocha Schneider). Borrowed shirts, shared drugs, and revealed hobbies become modes of secretly fawning over the boy who may or may not have homosexual tendencies. Dunn captures the complexity of being safe in the closet while needing to break out to get what your body is telling you to want or need.

By focusing on the nature of the closet, the various ways it is reinforced, and how it damages normal relationships, Stephen Dunn has crafted a singular coming of age gay drama that isn’t focused on the all-saving power of the first love with another gay boy. And, yet, even though Closet Monster is one-of-a-kind, it’s also a low budget movie whose construction never quite lives up to its ambitions. In a way, it’s a low-rent gothier version of a solipsistic Xavier Dolan movie. With a more imaginative cinematographer and one more round of polish in the editing room, Closet Monster could have been a great genius piece of art. Unfortunately, it is merely a really great story with a mildly underwhelming production. 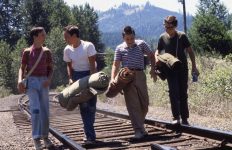