The Film: The Criterion Collection has released a restored version of American director John Ford’s Western, My Darling Clementine. The film comes in a two-DVD set or one Blu-Ray disc.

The plot: Frontier Marshal Wyatt Earp (Henry Fonda) cleans out the town of Tombstone, Arizona, after his brother is murdered by the dastardly Clanton gang. Earp is sometimes aided, others times hindered, by the town’s surgeon Doc Holliday (Victor Mature), who also moonlights as a gambling kingpin. The film also depicts Earp’s bumbling attempts at romance with prim schoolteacher Clementine Carter (Cathy Downs). The climax of the film is the gunfight at the OK Corral where Earp, his brother, Morgan (Ward Bond) and Holliday have a shootout with the Clantons.

The Best Scene: There are so many to choose from in this film: The first meeting between Doc and Earp; The drunken Clantons forcing an even drunker Shakespearean actor to recite Hamlet. For me,  the most beautiful scene  is Clementine and Earp walking to church on a Sunday morning while the congregation sings the lovely hymn, Shall We Gather at the River. Up until that moment the film is filled with jostling crowds and noisy barroom pianos and of course there is more violence to come. This small moment of tranquility is one of the reasons I keep returning to this film.

The Flaws: Criterion films are always high quality, but, as in life, nothing’s perfect, and neither are these films. The problem with Clementine: Linda Darnell, who plays Doc Holliday’s paramour and barroom chanteuse Chihuahua, although it’s really not her fault.  Darnell was one of the loveliest starlets of the 1940s, but she is saddled with a thankless role.  It’s no surprise that this film spectacularly  fails the Bechdel test, but her squabbling with Clementine over Doc Holliday is just so grating and unnecessary in what is otherwise a poetic film. Also, her singing is just the worst.

Most Quotable line: “When you pull a gun on a man, kill him!” Old Man Clanton (Walter Brennan)

Favorite DVD Extra: An interview with historian Andrew Isenberg about the real history surrounding the events in My Darling Clementine. To no one’s surprise the film is incredibly inaccurate, but Isenberg was also very enlightening on Earp himself. The real man was something of a con man, rather than the upright lawman portrayed by Ford.

Why It Matters: Ford is arguably one of America’s greatest directors, and Clementine is certainly one of his greatest films. The film encapsulates all of the major themes of Ford’s work (civilization vs lawlessness, the myth of the American hero) while also being his most poetic film. 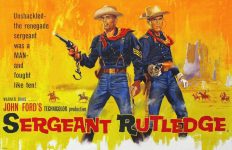 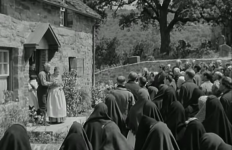 How Green Was My Valley (Year Of The Month)→