A benefit of the continuing digital democratization of filmmaking ,the past year saw an uptick in documentaries shot and directed by the subjects of the films themselves. In The Edge of Democracy Brazilian filmmaker Petra Costa directed and narrated footage taken during the power struggles in her country, much of it her own recordings and informed by its connections with her and her family. For Sama used footage of the Syrian revolution shot by journalist and Aleppo resident Waad Al-Kateab. The film is structured as a letter from co-director Waad to her young daughter Sama. Both films, particularly Sama, benefit from making their points of view immediate and personal rather than the subject of a dispatch from an interloper. Both films were rewarded with Oscar nominations at the 92nd Academy Awards.

But another film that didn’t receive the accolades or attention also had the most interesting discussion between the act of filming and the intrusion of being filmed: Midnight Traveler, an urgent refugee story as lived by married Afghani filmmakers Hassan Fazili and Fatima Hussaini. Midnight Traveler is a documentary assembled completely from cell phone video filmed by the couple as they flee with their two young daughters out of the Taliban-controlled Afghanistan and seek a safe area that will take them.

Film appears to be an organizing influence in the lives of the Fazili family. Early in the film they celebrate the acceptance of one of Hussaini’s projects into a festival in Turkey. But their art has put them and their two young daughters in danger. The lead actor in one of Fazili’s films has been killed by the Taliban (the nature of that film isn’t discussed in detail except that the victim was playing a Talibani commander – likely not a flattering portrayal). A family friend in the Taliban’s ranks warns Fazili that there is a price on his head as well. That friend is later killed.

Building strictly from the cell footage means missing some expected features. Some moments have to be described rather than shown, and the family’s shifting destinations are spelled out in titles. But any lacking in completion is made up for in purity, a point of view undiluted by stock images or the dreaded drone flexes. Credit to co-producer and editor Emelie Coleman Mahdavian for the assembly but as director and camera operators Fazili and Hussaini, the imprint of those living the experience is indelible. Weeks of sleeping in forests (where power for charging batteries is non-existent) go by in fleeting bursts while weeks at a refugee camp (where power is more readily available) stretch as the family alternately attempts to entertain themselves and brace for the next shoe to drop. The Fazilis are shown as a family who are without a doubt victims, but not to themselves, not all the time.

Coming from experienced narrative filmmakers, the shots in Traveller are more deliberately and artfully composed than the valuable but more journalistic footage in Democracy or Sama. A bifurcated frame shows Hussaini selling furniture as they prepare a dangerous move back to Taliban territory while their daughter plays obliviously in the next room. Especially in early scenes before circumstances force more clandestine filming, Fazili and Hussaini are positioned perfectly to capture the packing and goodbyes as they move in and out of dangerous homes. They use negative space when framing their family in these scenes to give context to their surroundings. It’s not staging, it’s just a familiarity behind the camera of where to stand and when.

Fazili uses film language when describing the backstory of his family’s plight in voiceover. “Cut” he says between each piece of the story he’s assembled for our understanding. An awareness of the filmmaking process is a recurring theme. It’s clear Fazili* shoots with an end product in mind beyond home videos. The details – Hussaini getting her feet adjusted after a long trek, their eldest stealing food from a nearby orchard, kids chasing each other playing as “police” and “travelers” in an imitation of their lives, – add up to a story about the mundanity punctuated by fear that their family is living.

The daughters, no doubt having grown up around this sort of thing, gamely tolerate the camera (to the point of Fazili being able to capture a tantrum in close-ups and a wide establishing) and later contribute to the movie themselves. The older daughter takes over the family camera to capture dance moves to pop songs. They take a turns adding narration, enriching the movie while keeping the line between verité and enhancement clear.

Fazili knows that making his videos into a movie means making his family into characters. And characters require challenges and threats. More than once he reaches for the camera at an unorthodox time. He has it out while Hussaini is reduced to tears thinking on the threats made by a belligerent smuggler. He rolls through a hilarious scene where Hussaini and Fazili squabble about feminism vis-a-vis his complimenting a woman in their refugee complex. Hussaini waffles between scolding and laughing aloud. They talk about the effect of the camera on their conversation and it’s heartening to watch two artists in discussion even in dire circumstances.

In the film’s most harrowing example of Fazili’s penchant for filming with both sides of the brain, he tells in narration about a time when his youngest daughter went missing and fears for her safety set the family in a panic. During the search, he says, he pictures the scene he could get if he had the camera with him. He describes the composition of a shot when the body is discovered. He chooses parent over filmmaker – the temptation to film lasts only a moment he says – and he hates himself for the thought entering his mind. His regret of this moment, a dreadful parental confession that he could have easily ignored or withheld, is the stressful apex of the film’s conversation between the role of the filmmaker and the role of the filmed.

I suspect part of the reason Midnight Traveler hasn’t received a larger amount of attention is the way it coasts to an end, as opposed to the dynamic crescendos of The Edge of Democracy and For Sama. Midnight Traveler stops with the Fazili family unsettled and without a country. They’re still caught in a limbo created by bureaucracies and prejudicial fears. Fazili narrates an imagined end to the film, the family finally safe and free, riding bikes at a park. This scene never comes. How tempting it must have been to create a finish to the story, a climax of horror or triumph. But Fazili is done serving the movie. The family’s story continues off camera.

* Both Fazili and Hussaini clearly contribute as camera operators but given the frequency with which Hussaini appears on camera and Fazili narrates, I refer primarily to Fazili as the one filming for simplicity. 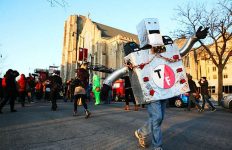 The Documentaries of True/False→