This is the first thing we’ve done on Disney+ since the introduction of content warnings on some of the material. (I suspect they’ve been put up to keep Muppet Show episodes intact and keep every episode on the service, frankly, but I’ll take it.) And, indeed, it is the first thing we’ve done with a content warning. Which it deserves. I’m given to understand it was already somewhat trimmed before the content warning was applied, but I can’t be terribly specific, as the only site I’ve seen that talks about it is someone who seems to be daring Disney to restore all the old, objectionable content—including the peddler in the original “Three Little Pigs.” And goodness knows I don’t want to be associated with that guy!

It is 1848. Arabella Flagg (Suzanne Pleshette) and her brother, Jack (Bryan Russell), had been living with their grandfather. He has died, leaving them penniless. Jack, who is I believe twelve, decides to run away to the gold fields of California to earn enough money to keep himself and Arabella in the style to which they’re accustomed. He and their butler, Griffin (Roddy McDowall), end up accidentally stowed away on a ship, earning their way by working in the galley. Unbeknownst to them, Arabella decides she has no choice but to follow them.

San Francisco is, well, Gold Rush San Francisco. Obviously, Griffin and Jack don’t have a stake; Griffin builds them one by barbering. They are partnered with Quentin Bartlett (Richard Haydn), an actor who has a map to the Mother Lode. He is being pursued by Judge Higgins (Karl Malden), who believes he should have the map instead. There are all sorts of goings-on, and they end up back in San Francisco where, for reasons, Griffin has to fight a bare-knuckle bout with Mountain Ox (Mike Mazurki). Mountain Ox works for Sam Trimble (Harry Guardino), a saloon owner who also employs Arabella as a singer.

This is another one of those movies that makes me think of the Mystery Science Theater 3000 Amazing Colossal Episode Guide summary of the movie City Limits: “Lots of stuff happens, but nevertheless this is a boldly plotless movie.” Why is Griffin referred to as Bullwhip? Because Jack reads a dime novel wherein a character is named Bullwhip. In point of fact we never do learn his actual first name. What’s with the boxing match? Well, Griffin knocks out Mountain Ox in his first trip to San Francisco and Mountain Ox spends the whole time wanting revenge, whereas Griffin doesn’t want Arabella to sing in a dance hall.

A lot of the movie can be summed up as “this happens because they didn’t know how else to get to the next step.” When in doubt, have Judge Higgins come in, twirl his moustache, and make their lives more difficult. Jack almost drowns in San Francisco Bay because he’s weighted down with gold, and the only reason I figure they did that is to give him a reason to no longer be in the gold fields—because he’s found gold—but also a reason to no longer have the gold—because he has to drop the belt or drown.

I will say it’s about the only movie I’ve seen that really gets the curious economy of Gold Rush California. (The other I can think of also has a tangential Pleshette connection, as she appeared in its sequel—but she’s not in Support Your Local Sheriff.) The beginning of the movie is set soon enough after gold is discovered that the captain who brings Griffin and Jack into port says no ship has left San Francisco in some time, as the crews run off to the gold fields first go. Barbers are unheard of, and indeed someone sells a ticket on a ship to California for well over a thousand dollars at the beginning on the assumption that you’d be able to get the money back just by washing the gold dust out of your socks in California. Then at the end of the movie, people are working honest jobs because they’ve discovered that it’s a much easier way of getting money than hoping to find gold.

It is very much in the spirit of Support Your Local Whatever. Which is actually building on what this movie does; this movie is from several years before. But it’s that sort of comedy Western that plays with tropes and tries not to take itself too seriously. In general, I approve of that sort of Western. We should have more of them. There’s an implicit assumption to most genres that there’s no reason to laugh at them, whereas let’s be real—there is every reason to laugh at them. Why not? They can be as funny as anything else. I mean, this movie isn’t, but it still could be.

And let’s talk about that content warning, because it is a doozy. This is a ludicrously white California. It’s not just that the leader of the supposedly Californio bandits is actually Quebecois Joby Baker, whose next movie would be the considerably better Blackbeard’s Ghost, where he once again played a crook. Though one of the other members of his band was played by Pedro Gonzalez Gonzalez, so that’s something. However, the bandits are the only people who are actually supposed to be PoC in the entire movie. And then Walter Matthau disguises himself as the most appalling Chinese immigrant stereotype in the Wild West. California’s Gold Rush history has never, from what I can tell, been shown in a way that portrays its actual ethnic realities, but this is ridiculous.

I wrote this one as a favour for a friend; encourage me to write something for you by supporting my Patreon or Ko-fi! 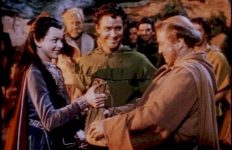 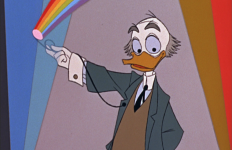 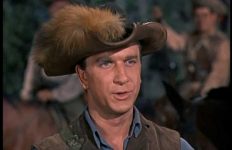