I love a good True-Life Adventure. These days, though, it feels as though the only one anyone wants to talk about is White Wilderness, and even there, they only want to talk about the lemming thing. Which, yeah, the lemming thing’s pretty awful, the more so if you know more details than the average person does about it. (They weren’t even local lemmings!) I absolutely lied to my son when he was a toddler about what happened after the film moved on from them. Of course I did; I wasn’t going to say, “No, son, those lemming died!” But if you can get beyond the lemming thing, there’s some fine wildlife photography in even White Wilderness, and most True-Life Adventures don’t even come with tragic backstory!

I mean, they’re also not all sunshine and rainbows. There’s a lot of sunshine here, because we are in the Sonoran Desert outside Tucson, Arizona. But if there’s a rainbow, it comes right before we see the force of a flash flood. The film features such moments as the battle between a tarantula and a tarantula hawk. (One of those species of wasp that paralyzes another living animal and feeds the still-alive creature to its young.) And, of course, quite a lot of the movie takes place at night, because desert wildlife tends toward the nocturnal, so as to escape the heat of day. The movie is full of dwarf owls and roadrunners, bobcats and ground squirrels. Not to mention saguaro cactus and the brief flowering of the desert after rainfall.

I mean, sure, some of this is actually filmed in the studio, it’s true. In case you’re wondering how come the camera’s able to get into the kangaroo mouse’s burrow. And the Salton Sea isn’t the remnant of an ancient ocean; it is, in fact, a manmade toxic stew that nature fiercely reclaimed. Still, it’s a beautiful film nonetheless and quite the rebuttal to people who think that deserts are devoid of life. Some of it is even cute, though those baby kangaroo mice are decidedly not. And of course, if you’re afraid of spiders, wasps, or snakes, this is probably not the movie for you.

Up until this point, the series had been shorts; this is the first feature-length entry. It was inspired by the footage of the wasp and the spider; Walt was fascinated by it. And it is an example of how the battles of smaller animals are no less ferocious. For obvious reasons, most of this film is about smaller animals; in this harsh climate, there’s not much living for the larger species. Except the saguaro, itself the home to many other species. An animal trying to live here would require an enormous range to find enough food and water. So we have one of the world’s smallest owls, the only owl species to survive here. Assorted mice. Snakes and lizards, but the largest of them is still not terribly large.

Oh, yeah, the roadrunner. Yes, this is a few years after Warners developed their own, and it’s true that this one isn’t as entertaining. There’s no coyote; they do live in the Sonoran Desert, but for whatever reason, we still don’t see one here. This one is more interested in lizards than birdseed, because it’s a real roadrunner. It doesn’t say “beep beep” or “meep meep.” The real one coos and clicks. This one also doesn’t stay on the roads, because this isn’t filmed on roads. I suppose they could’ve left it out, but it’s an awfully important piece of the desert ecosystem, after all.

Help me get a good framed print of the picture of me, my dad, and my older sister at Salton Sea; consider supporting my Patreon or Ko-fi! 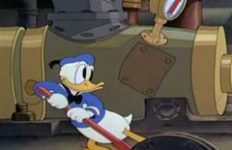