Jack (Keegan Michael-Key) is part of the improv comedy troupe The Commune when he and his girlfriend, Sam (Gillian Jacobs), get auditions for the SNL-stand in, Weekend Live. Jack makes it in, but Sam whiffs on the audition, leaving their relationship in a catch between success and idealization of the improv formula. Jack’s success also separates him from his fellow troupe members who are simultaneously jealous of his new-found security and resentful of their non-success.

Mike Birbiglia’s Don’t Think Twice has all the hallmarks of a personal indie film that is perfectly humorous, personal, insightful, and slight. Do you grasp for your dreams of success, or do you cling to your ideals? Do you stick with the rising success even as you’re not finding it yourself? What do you do as a group when one of the team finds himself elevated to another echelon of society? Birbiglia wrestles with these questions without alienating the non-improv audience. Instead, he uses improv as a device to explain his life decisions and…omg, this feels like every perfectly pleasant low-key indie dramedy that doesn’t stem from the Zach Braff school of narcissism.

If nothing else, Don’t Think Twice is a great date movie. Something which you can snuggle with safe in the knowledge that you’re not going to be viewing anything controversial. You can make out without missing too many missed plot points. If you’re drinking wine, it’s so accessible and easy going there’s never going to be any difficulty following the movie. It’s a perfectly pleasant and delightful movie that is trying to say something honest, no matter how simplistic it may seem. And, you’ll probably forget about it in a month or three.

Listen, the acting here is good (the cast is a who’s who of indie comedies: Gillian Jacobs, Keegan Michael-Key, and Mike Birbiglia, Chris Gethard, Kate Micucci, and Tami Sagher). The storytelling is good. The visuals are about average and perfect for watching on television or a laptop. There’s nothing huge or mindblowing contained within these frames. There are no severely sexist missteps or horrendous lapses of judgement. It is just a perfectly acceptable slice of reality. 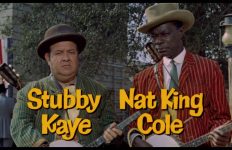 Year of the Month: Sunil Patel on CAT BALLOU→

Year of the Month: Mr. Apollo on HELLZAPOPPIN’!→