SPOILERS for Arrested Development and It’s Always Sunny In Philadelphia.

There are two kinds of artists in the world, my friend: Arrested Development artists, and Always Sunny artists. Both are sitcoms that give themselves entirely over to just trying to be funny; AD has sentimental moments here and there, but never lets it get in the way of a good joke. Both series deliberately choose to have awful human beings for protagonists as a central aesthetic choice. Both gradually become dense networks of running gags. It’s the way each series connects its gags and its episodes that is distinct in a small but significant way. Arrested Development is famous for planting gags that foreshadow major plot twists – its greatest and most celebrated achievement in this department is the sheer number of gags that foreshadow Buster getting his hand eaten by a seal. It’s like humour as a magic trick, distracting you with one hand while the other prepares the surprise. It’s an extension of how the show is deliberately constructed. GOB’s name was chosen as a reference to Jeb Bush (just as all the characters were written as references to the Bush family), and as a reference to the biblical Job, and as something that would sound funny even if you were unaware of those two facts. Arrested Development rewards looking at it from a ‘meta’ perspective, constantly questioning why choices were made and where its going with those choices so you can be surprised and amused when it zigs as you expect it to zag. This factors into the slow buildup of running gags, which happen because that’s just how this world happens to function. Oscar makes references to being Buster’s father (complete with a sad piano theme) that Buster never picks up on. Michael dislikes Ann Veal and constantly says “Her?” about her. There’s no touching in prison. GOB makes huge mistakes.

Always Sunny is a lot more straightforward. It never tries to trick the viewer, often putting its goals in the mouth of the characters – like, “The Gang Tries Desperately To Win An Award” has the characters discuss the fact that the show has never won an award with the bar itself serving as the absolute thinnest of metaphors, with the characters trying to engage with the tropes and style of more conventional sitcoms. And when the show does running gags, it often has characters specifically cite where the reference is coming from. AD fills both the text and subtext with gags; Always Sunny has no subtext and only ever does one joke at a time. Its running gags are less principles that the world works under and more tools that the character keep reusing to different results, with, for example, Dennis starting out as an egotistical wannabe playboy and slowly evolving into a sociopath verging on date rapist as his schemes to sleep with women get more complex and absurd (and as the age difference between he and the women he pursues grows). Neither approach is better or worse than the other, but they do create a vastly different effect, and I think they come from different artistic impulses. Put simply: an Arrested Development artist is trying to create a set of works that all connect into a coherent vision, and an Always Sunny artist is generating art and hoping at least one particular work happens to click with people. Obviously, this isn’t a completely strict divide; Always Sunny has a particular sensibility that hangs over every episode, and that’s part of what draws people to it. And AD has some great standalone episodes. But I think it factors into people’s reactions to the shows, or at least into mine. If I want to watch Arrested Development, I want to sit down and rewatch the whole series in order, never skipping an episode even as some arcs are stronger or weaker than others. If I want to watch Always Sunny, I’m usually thinking how much I want to rewatch, like, “The Gang Dines Out” or “The Gang Gives Frank An Intervention”, and even when I’m watching through a season I usually skip over episodes that I either don’t like as much or simply don’t feel like watching that particular moment – I’m tolerant of experimentation and failure in Always Sunny because that just feels like the nature of the game its playing, and even a middling episode usually has great bits. Conversely, I barely ever rewatch season four of AD despite it having some transcendent comedy because I just can’t bear the mediocrity of the whole exercise.

Quentin Tarantino is an AD artist. All of his films explore a different facet of life and pursue a different artistic goal, trying to create a Definitive Tarantino Statement – Reservoir Dogs is his heist flick, Inglourious Basterds is his war movie, Kill Bill is his kung-fu Western scifi anime etc film. Michael Mann is an Always Sunny artist. In one way or another, everything he did up to 1994 was practice for Heat, a constant redrafting of a basic idea until he reached a level of development he was satisfied with. 8 Bit Theater is an AD kind of webcomic; both the style and the ongoing story make it impossible to share in individual pieces, and you have to read the whole thing from start to finish to best enjoy it (it even has AD-style foreshadowing gags). Strange Planet is an Always Sunny kind of webcomic, closer to old-fashioned newspaper comics in how the basic premise is something you can immediately grasp based on only one strip (aliens going about ordinary tasks while speaking entirely literally, drawing attention to how weird everyday shit can be) and it applies that premise to as many situations as it can find, hoping to find some absurd combination of words (“I feel suboptimal.” / “I am not trained for this.”). I’m equally fascinated by both kinds of artists; fundamentally, I’m drawn to being an AD artist, making art based on theories where everything ties together and the first sentence informs the last sentence while the last sentence recontextualises the first, and I love the idea of writing My Definitive Space Opera and moving on to My Definitive Crime Story and My Definitive High Fantasy and so on. On the other hand, what Always Sunny artists do is so difficult for me to comprehend that I’m compelled to keep throwing myself at it until I can grasp whatever magic they’re using. Musicians, painters, Viners, poets, funny Tweeters; all of them seem to have access to some higher plane of inspiration that I’ve been locked out of. The only time I ever feel like I’m in their company, oddly enough, is writing criticism. There’s a sense of inspiration being an integral part of the process – where the idea driving the essay is so important to the finished product that I’m forced to forgive myself for not being able to turn it on every single time, and I spend more time looking for things to feed that inspiration than I do actually writing. Once a week, I feel how I imagine the Always Sunny writers feel. 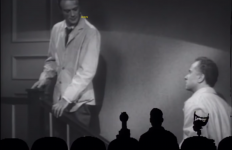