Browse: Home / Film On The Disc: Escape From L.A.

Look, I’m not here to argue that Escape From L.A. is a good film, because it isn’t – it’s an ugly, unfunny, and worst of all boring hundred minutes. But whenever I plan out a Carpenter marathon, I always find myself ending with it, because I believe it acts as a perfect punchline to Carpenter’s career – I totally believe him when he says it was the last time he ever had fun on a film set, because nothing he did after that felt necessary, like he’d said everything he’d had to say. Needless to say, SPOILERS lay ahead.

So, Carpenter’s films are defined by his bleak worldview. His worlds are sparse and uncomfortable; his plots are apocalyptic even when they aren’t literally about the apocalypse; his villains are physically and emotionally incomprehensible outside their desire to kill you. None of his heroes are actively out to make the world a better place, they’re just trying to get by – the most heroic of them, Nada of They Live, is slowly pulled out of his general self-interested philosophy as his moral sensibility keeps getting tested and he discovers his ability to make a difference.

EFLA ends with Carpenter’s most iconic and most Carpenterian protagonist, Snake Plissken, a completely self-interested asshole who has to be forced into his stories, holding the control pad for an EMP satellite range that could destroy any technology its aimed at. The President (“President of what?”) observes he has two options: wipe out America’s enemies, or wipe out America. He chooses a third option: wipe out all technology, everywhere.

By the time he’d made EFLA, Carpenter had made seventeen films, and over and over we saw his heroes fighting the end of the world in some capacity, sometimes winning, sometimes losing, sometimes just barely keeping their heads above water. When I finish the movie after my Carpenter marathons, I feel a palpable sense of relief; as if Carpenter had been veering around the question “Would it be so bad to just let the world end?” and finally allowed himself to honestly answer “no”. The movie presaged a metaphorical death – Carpenter’s movies had consistently become mediocre-to-terrible by this point, and by all accounts he’d completely lost enthusiasm for filmmaking; in the past few years he’s transformed himself into a professional musician. Escape From L.A. might be a terrible movie, but its ending lets us know that it’s okay if we feel like we need to end the world and start over. 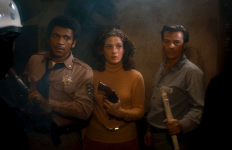