This new Shudder documentary is based on a book first published in 2011; it’s almost heartwarming that the film is book-ended by enthusiastic discussion of Jordan Peele’s Get Out (2017), such a clear game-changer that it’s both enlarged the conversation and made it considerably more optimistic.  After decades of marginalization, stereotyping, and invisibility, the black horror film–better yet, the black horror film made by black artists–is finally breaking out and getting the critical attention and commercial distribution it deserves.

For now, anyway.  Horror Noire is painfully familiar with how short Hollywood’s memory is.  There’s no cultural sea change that can’t be undermined, toned down, or ignored, and no straight line between Moonlight winning Best Picture for 2016 and Green Book winning it for 2018.  Progress isn’t that simple.  So while it’s easy to look at Horror Noire as chronicling a history of horror films that triumphantly culminates with Get Out, it’s more fascinating to look instead at what the documentary shows about how representation actually functions for the culture being represented.  This would make excellent viewing paired with The Celluloid Closet.

Horror Noire is deeply engaged with the genre–and deeply, deservedly ambivalent about it.  Actresses speak about the frustration of going into multiple auditions knowing that they’re going to need one million deliveries of, “Are you okay?” as their character earnestly asks after the physical and emotional safety of the white lead.  Actors talk about paging through slasher scripts to see how long it is before they get killed off–and also about being happy about the opportunity for a paycheck.  Tony Todd’s deep-voiced, charismatic Candyman is an iconic and emotionally complex horror movie villain, rivetingly portrayed–and part of a long-standing cultural pattern of fictional black men obsessed with white women.  Scatman Crothers’s death in The Shining is a bitter disappointment–he lived in the book, but in the film, he’s one more horror movie black man dead before the end.

There are disagreements, external and internal.  One of the best segments involves Rachel True dissecting her role in The Craft, something where it’s impossible to come to any definitive conclusion.  If all the other characters have a “thing” in their lives that’s separating them and causing them suffering, is making her character’s “thing” her race an illuminating understanding of the grinding effects of racism?  Or is it a kind of race-related Smurfette Principle, where there are all kinds of white girls but the only thing you need to know about the black girl is that she’s black?  And what does all this mean compared to when little girls see her on the subway and get excited about having seen her in the movies?

Other films get a more unanimous verdict: fuck Birth of a Nation, fuck yeah Night of the Living Dead.  And I was delighted by the attention paid to the under-seen Girl With All the Gifts, a film that’s especially resonant when seen through this lens.

Horror Noire also delves into horror films marketed directly to black audiences, from Blacula and the dreamy, uncategorizable Ganja and Hess to Tales From the Hood (now with a sequel) and Def by Temptation; it talks about the way rap and hip-hop meant many 90s and 2000s horror films upped their “coolness” factor by including rapper-actors and the way blaxploitation filmmakers worked with and around their restrictions and low budgets.  Produce Tananarive Due (an acclaimed horror author) assembled a great list of interviewees, and the interesting talk flows continuously and at all different angles.

But one of the most haunting bits for me was where Jordan Peele talked about the “Sunken Place” in <i>Get Out</i>; it’s no coincidence, he says, that it resembles looking at a movie screen from a back row, watching events unfold that you’re not allowed to participate in. 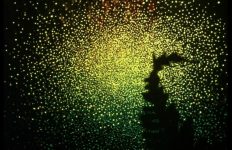