Yesterday afternoon, Sony dropped the trailer of the next Adam Sandler film, Pixels. Even though executives are tired of trying to sell Adam Sandler to an audience that increasingly refuses to have anything to do with him – his last film, Men Women and Children grossed $700k, and Box Office Mojo believes that The Cobbler doesn’t even exist  – Sony is still putting him in another $110m tentpole blockbuster. Pixels (2015) is about Adam Sandler leading a team of arcade champions on a battle against the 1980s video games who are attacking the planet. If this sounds familiar, it’s because it’s the latest in a long line of similar plots.

2002 – Futurama – Anthology of Interest 2 – Raiders of the Lost Arcade

The saga of influences for this movie starts in 2002, when Futurama released Anthology of Interest 2, a trilogy of unrelated shorts linked by Professor Farnsworth’s What If? machine. The middle sequence, Raiders of the Lost Arcade, featured New York City under attack by the Nintendians (headed by Donkey Kong and Lrr), who are intent on destroying the city.

(note: video may not play on mobile devices)

The true influence of Pixels is a 2010 short about a discarded television spewing a cloud of pixels into the atmosphere. These pixels transform into major 1980s video games intent on transforming the world into a giant pixel. Their intent is the deresolution of life. Unlike the Futurama episode, nobody is battling these video game pixels, and they are just ambushing the planet on their own.

In 2012, Rocket Jump made a short that took Raiders of the Lost Arcade and replaced the Futurama gang with new school video game heroes. Taking its visual cues straight from Pixels, this real life short had similar gags as the first two, but the variety of jokes in this theme were noticeably wearing thin.

And, now, the trail of the tape ends at Pixels, a feature length adaptation of the 2010 short Pixels that looks like Raiders of the Lost Arcade only replacing Futurama with Adam Sandler, three other white guys, and a white female love interest for Sam.

While I think it is great that these shorts are getting a big budget treatment (and they look hilariously epic compared to the other incarnations), never once have I ever uttered the sentences, “You know what would make this better? Adam Sandler.” Not during Futurama. Not while watching a short movie. Not even while watching Sphere. Yet, here we have it: an episode of Futurama starring Adam Sandler. Directed by Chris Columbus (Mrs. Doubtfire, Bicentennial Man, and Rent), and written by Timothy Dowling (Role Models, Just Go With It) and Tim Herlihy (Billy Madison, Little Nicky, Grown Ups 2), this is sure to be, well, an Adam Sandler movie. Enjoy. 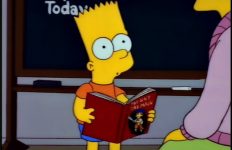