Browse: Home / How Do You Like Your Badly Written Characters?

SPOILERS for Kong Skull Island and Godzilla (2014) ahead.

Bare with me, the first thirty seconds of the second trailer for Kong: Skull Island are a fantastic pitch for what is considerably an out-there concept. The simplicity of the plot is taken care of in three lines, the set design and 70s era are clearly indicated by the technology and clothing, and most importantly the entire tone of the film is indicated with great use of Creedence Clearwater Revival’s cheery but grim, “Bad Moon Rising”. The contrast of the song works well with the frat-boyish machismo war hero drive that has been characterized in previous films set during the Vietnam War and it’s a great callback to An American Werewolf in London which also perfectly uses the song to characterize it’s monster-run-amuck feature. The possibilities surrounding just these thirty seconds thrilled me more than any movie had in quite some time; everything about this, from it’s plot to the stacked cast, just completely seemed to be a tailor-made mash-up of so many different things I love. It really was a too-good-to-be-true kind of expectation.

It did not take long to get into the movie before I was recalling one of the best pieces of media Joss Whedon has ever written. 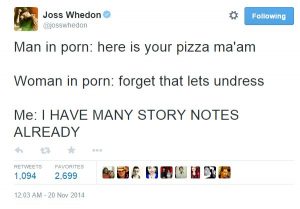 Yes, Kong Skull Island, I too have many story notes for you. You may have used Tom Hiddleston like a shiny sexy pair of keys to keep my attention, but don’t think I wasn’t sitting there rewriting dialogue or scenes the entire time.

The thing is, it’s easy for me to sit here and judge a throwback B-movie for lacking in script, story, and character development because the process of making a film is an arduous ordeal so what do I know anyway? It’s just a silly action-adventure film with a giant ape, why does it matter if the mediocre writing was distracting? It’s trickier because big genre pictures such as this can still get a pass if there’s enough going on in the foreground to distract you from what’s failing in the background. The spectacle of the film, Kong himself, is ultimately what an audience wants to see, damned if the actual characters and story are you know…good. And yes at the end of the day, the movie delivers on ape-action-madness with the ending promise of even more big monster movies coming down the pipe. So it doesn’t ultimately matter if I think he writing is weak because this is still gonna happen.

However, looking back on the past few years of sci-fi/monster films, there’s definitely a common theme of making the human characters just not very interesting which cuts the movie off at the knees by making it not as worthwhile to revisit since we do have to spend a considerable amount of time with them.

In watching Kong Skull Island, it’s very logical to compare and spectate about the film’s relationship to Gareth Edwards’ 2014 Godzilla feature, which is going to lead to some kind of monster brawl film eventually. In the wake of Rogue One‘s completely valid criticisms, I find myself being a bit of an Edwards apologist because I do genuinely really like both of those movies even though they have similar writing problems as Skull Island does. Across the board all three movies have weak characters, which brings me to the proposed question: Assuming that a genre film isn’t going to make an effort to write great characters, what is easier to digest, Under-Developed Characters or Incomplete Characters?

The differentiation of Under-Developed and Incomplete becomes a matter of their functionality in the plot. For example, Bryan Cranston’s character in Godzilla (the only character people gave a damn about), does serve a purpose to the story. Whether his arc was finished by the end of Act I or Act II or Act III, the outcome would have been the same in the grand scheme of the plot. He and his son are a focal point of perspective on a much larger event happening, and how they are involved in the movie makes sense. Aaron Taylor-Johnson’s character works in the army as a bomb expert, his purpose for being where he is in the film is only a problem in that he is not interesting to watch. For what it’s worth Godzilla‘s script is terribly basic but fundamentally solid and honestly not a bad example of how basic script structure is written. Again, not talking about the quality, but the functionality: it establishes everything plainly and clearly.

In contrast with Skull Island, here just about all of the characters -John C. Reilly being the exception- could be interesting, they could have more fulfilled arcs or motivations, but they are Incomplete. Brie Larson’s character has a trait, she is a photographer, and other than one line about her experience overseas and “being in the shit”, she does literally nothing else; has no real motivation, personality, or characterization that serves in the whole functionality of the plot. She’s not here for any monetary reason, she just likes taking pictures. That is the only thing her character knows how to do.

In juxtaposition with Bryan Cranston’s nuclear scientist character, this movie’s closest parallel is John Goodman’s shady government character. The way his character behaves would lead you to expect something to come out of his interactions with his team of scientist or the soldiers or the wraith of Samuel L. Jackson’s jaded lieutenant. Is he a good guy? Is he going to betray everyone? It doesn’t matter, his ultimate purpose is just to die. How is this different from Cranston’s character? Payoff. There is nothing to gain, nothing to lose in terms of the plot from Goodman’s death here.

Which anyone walking into a monster movie knows characters are going to die but the fact is a bulk of its cast actually walks away relatively unharmed which negates their purposes even further. Why are there so many characters in this movie? It could have easily been chopped down to a cast of 4 or 5 and been able to give more intimate details and arcs. The idea of John Goodman’s character is interesting, the idea of Samuel L. Jackson’s character growing more angry and paranoid is interesting, and so on and so on, but except for John C. Reilly there’s nothing about these ideas that are completely thought out. For that matter, why is the movie set in Vietnam when it’s depiction of the era is a rather basic comprehension of 1970isms. There’s just not a lot of follow through here.

Personally, I find the incompletion to be the more distraction feature because there’s obviously some idea here that was chosen without any sense of how to develope it. This then becomes a tolerance for what kind of development was made. With these genre movies, the plot is going to serve to the ultimate attraction of the monsters on film thus making the characters need to function in service of them, not the other way around. I can work with Godzilla or Rogue One because while the details are scarce or non-existent with the characters, I can fill in the blanks as the plot goes on. When a movie presents characters who have distinct characterization that just aren’t fully flesh out but are clearly there, it’s harder to ignore because the movie keeps re-emphasizing the one or two traits without giving us any new information. Brie Larson takes pictures because she’s a photojournalist and that’s it, that’s all you get, here she is taking pictures every few minutes like it’s a nervous tick.

An inverse of these would certainly be Jurassic World, which needs to be more about the humans and their interaction with the dinosaurs. Skull Island has airs of Jurassic Park in it, which is an example of great characterization in contrast to World which has defined characters. They’re just bad; the information given about those characters amounts to characters that are not likeable.

So what do you prefer?

-Tier 1: Incomplete Characters who have limited screen time, dialogue, and traits that don’t serve a purpose to the plot or each other.

-Tier 2: Under-Developed Characters who are basically defined but are not given in-depth character moments or dialogue.

-Tier 3: Defined Characters who’s development has a negative affect on the script, in that their intended purposes actually give disadvantage to the overall picture.

All of these movies are catering to set pieces as opposed to fully fledged scripts that are never going to be about the characters unfortunately. But as a writer it’s hard to ignore the characters, especially when the premise is rather interesting and worth having good characters to support the foundation of the script. It’s wasted potential to elevate the movie from popcorn novelty to great motion pictures. It’s disposable cinema at the end of the day and it leaves me frustrated yearning for the movie I was imagining in my head.