Browse: Home / Jerks And Saints, A Mass Effect Playthrough: “Tales Of Interest I”

“It’s funny, we finally get out here, and the frontier has already been settled! And the residents don’t even seem impressed by the view. Or the dangers.”

From a story standpoint, this seems like a good place to slow down and do some sidequests. Mass Effect draws on all kinds of science fiction, but from a structural perspective the main thing it seems to draw on is television – “Find The Beacon” and “Expose Saren” could be seen as the double-episode pilot of the series, the big missions like “Find Liara T’Soni” are the Big Plot Episodes, and the sidequests are the standalone episodes, the Monster Of The Week episodes – The X-Files would be the most famous, most influential version of this kind of storytelling, but Stargate: SG-1 is closer to our home genre for this kind of thing. It raises an interesting question as to the unique properties of television storytelling; one of the minor things The X-Files fanbase is known for is the split between people who preferred the serialised episodes and people who preferred the MOTW ones. Television shows can do epic serialised stories like The Shield, but they can also act as a series of short stories with preconceived characters we already like – Star Trek and Star Trek: The Next Generation are the big, big examples, but I would say it’s the defining mode that scifi television worked in for a very long time, but especially in the 80s and 90s. If dramatic structure intends to get you to ask “What happens next?”, this is a mode of storytelling that intends to get you to say “Remember when?” – “Remember when Picard survived torture? Remember when Carter blew up a sun? Remember when the Scooby Gang were stuck in a musical?”. I think it was LOST and Battlestar Galactica that completely destroyed the popularity of this mode of television genre storytelling (which is ironic, considering both went out of their way to have great standalone episodic stories; the public consciousness always flattens the subtlety out of everything) in a way the medium hasn’t really recovered from yet.

Mass Effect‘s sidequests obviously also draw on their history in video games, but I think it is instructive to compare them to episodic television. They’re much smaller in scope than the main mission, they’re done with no expectation that they’ll ever come up again, and they’re often themed around that same kind of “we help the helpless” motivation as all those shows – they’re often thrown at the player when you enter a new star system, and often as messages from Admiral Hackett (voiced by legendary scifi actor Lance Henriksen), sending requests on behalf of Alliance Command (this also makes them an excellent reward for exploring the galaxy). This is another example of the game having a great idea with flawed execution; if this game’s flaw can be summed up in one word, it’s pacing, with missions either being the barest speck of an idea stretched out too far, or an overwhelming amount that piles too many into one go. Everything’s either too short or too long, and this is something that the second game would have masterful control over. The bright side is, every mission does actually expand the world in some interesting way.

“Missing Survey Team” is a mission I picked up from news reports in the elevator on the Citadel, although it’s also possible to find it by hacking a particular computer terminal. It’s pretty much what it sounds like; a research team for the company Exo-Geni has gone off the radar, and Team Shepard tracks them down and finds they’ve all been turned into husks for some reason. It’s the absolute minimum of a mission – Shepard doesn’t even have any actual lines – that’s saved on a deeper level by the fact that it shows the dangers of space exploration and how you can stumble on these husks at any time, and on a more superficial level by the fact that fighting cyborg zombies kicks all kinds of ass. I did a pair of missions that expanded on human biotics as well – “Hostage” is one of the best sidequests, where Hackett has you rescue the Chairman of the Parliament Subcommittee of Transhuman Studies from biotics; humans develop biotic powers as a result of exposure to element zero in the womb, and their potential for biotics is augmented and controlled with implants. Implant technology is something that’s come a long way; the current generation is called L3, and L2 biotics are known for side effects ranging from severe insanity and disability, down to simple headaches.

(Surprisingly, this is something that’s actually much less dryly delivered in the game – most of it comes up in natural conversation, and the mission itself basically just says “L2 biotics took a guy, go get ’em”)

The climax of the sidequest has you talking down their leader holding a gun to the hostage’s head. They’re motivated by a desire for reparations – aside from the horrific side effects some L2s suffer and the rumours that corporations deliberately tried to expose unborn children to eezo, L2s in general suffer from prejudice and mistrust. “[Speculative fiction concept] + bigotry” isn’t a trope I have much patience for, and I roll my eyes at the whole ‘people automatically hate people with superpowers’ half of the equation, but the indifference of both corporations and government that creates the L2 Biotic situation feels depressingly plausible to me. With sufficient Charm or Intimidate, Shepard can resolve this peacefully (with a little help from the Normandy’s resident L2 Kaiden if you take him along), and it feels very much like a more grounded solution to a Star Trek problem – Shepard doesn’t even promise that all the biotics’ problems will go away (and in fact all the ones here are going to jail), but the Chairman does promise that he’ll take another look at the reparations issue, and he does seem shaken into realising how bad biotics have it. Next to this is “Lost Freighter”, a mission in which you find a ship floating through space on minimum life support. It’s even more of a speck of a mission than “Missing Survey Team” – Team Shep explores a completely empty ship, finding it’s full of traps and a single braindead man kept medically alive. It turns out a mentally unstable biotic woman went nuts and killed everyone when they tried to turn off his support, and she attacks you, forcing you to kill her. I do like how eerie it is, though it’s not exactly sensitive to mental health issues, and of course it’s yet another example of trying to make a bigotry metaphor out of people who actually are legitimately dangerous.

Finally, I played “Geth Incursions”, far and away the worst sidequest in the game, taking everything terrible about the gameplay and doubling down on it. The idea is that geth outposts have been spotted around the Armstrong Cluster, and Shepard is sent in to take them out. The game’s open world consists of a galaxy map (which is incredibly beautiful in visuals and sound design), from which you select star clusters, then star systems, then planets and moons; you pick a planet and go down to it, and you have a large area to explore. In theory, it’s supposed to give you a sense of exploration; in practice, all the actually important shit is marked on your map and the only things you have to find other than your missions are a few enemies and a whole lot of simple Simon Says games (In all honesty, the only exploration sidequests I ever thought were worth playing were in the Grand Theft Auto games and some of their imitators, and that’s because their maps are intricately designed and filled with dumb jokes). Generally, these missions are spaced out and relatively easy; “Geth Incursions” asks you to do it four times in a row, and each time is consciously ten times harder than most missions.

“Harder” in Mass Effect doesn’t mean ‘more tactically difficult’ or ‘requiring more creative solutions’, it means ‘it takes even longer to whittle down the enemy’s health’, which makes “Geth Incursions” a monotonous slog. Of course, this being a sidequest means it’s optional, so why do I do it every time? Firstly, I try and get XP wherever I can. Secondly, it has an eerie ending, implying a level of internal life for the geth that will actually pay off down the series. Finally, and most importantly, when it’s done, Tali asks you if she can take some of the geth data you pick up back to her people, and it feels great to help her out. Underneath this series’ flaws and dryness is a warm, beating heart, and this very action will come back in a small but emotionally affecting way in the second game. 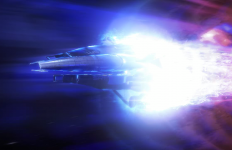 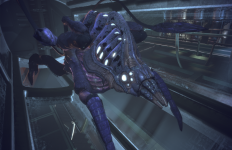 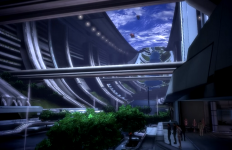 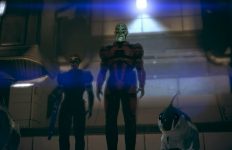