Madonna
Facing the drubbing that Madonna received in the wake of Body of Evidence, Madonna took two years before she would show up in another movie. In 1993, Madonna would go on The Girlie Tour, but it was a short stint of only 37 dates. The Girlie Show was also Madonna’s only tour between the Blonde Ambition tour from 1990 and the Drowned World Tour in 2001.

Erotica only went double platinum, and never hit #1, a failure considering The Immaculate Collection is certified Diamond (10x platinum). The Girlie Tour was a flop, with some dates cancelled due to low ticket sales. Body of Evidence was both a flop and a critical failure. Dangerous Game was critically supported, but a commercial flop. After Truth or Dare, Madonna’s controversial behaviors were suddenly poison.

Madonna’s take no prisoners mode from 1990-1993 will perhaps be her lasting legacy. Nothing she has created after Erotica has had such an image-defining impact, even though Erotica was her weakest selling album of the 1990s.

As a result, Madonna had to go into Damage Control mode. Early 1994, Madonna was still raging against the machine. She dated Dennis Rodman, a flagrant bad boy, and also had her controversial David Letterman interview. But, in 1994, Madonna released the album nobody remembers, Bedtime Stories. This album was Madonna going softer than the sexed up Erotica. Hard dance beats were changed out for lounging music. Songs about cunnilingus were replaced by songs about romance. The lead single, Secret was all about softening images. Longer blond hair, a loungey R&B groove, non-explicit romantic lyrics, a video that is set in a lounge mode. Madonna was presenting her softer image.

Still, she knew she was publicly apologizing for something she didn’t regret. Her final single from Bedtime Stories, 1995’s Human Nature, was a Fuck You to the people who thought she had gone too far. The literal chorus was “And, I’m not sorry./It’s Human Nature.”

If Human Nature was Madonna saying “I’m not really sorry” and still using a tongue in cheek sexy image, she would double down with her role in Four Rooms by playing a lesbian witch dressed in skin tight pleather.

Julius Kassendorf
This movie. And, more specifically, this part of this movie.

Four Rooms is one of those ultimate super-director anthology movies. Only, instead of super Hollywood directors, these were directors that were hot on the Indie scene at the time. Four Rooms was produced by Lawrence Bender, who rose to fame by producing Reservoir Dogs. He gathered four directors who had just broken through the indie scene – Quentin Tarantino (Pulp Fiction), Robert Rodriguez (El Mariachi), Alexandre Rockwell (In the Soup), and Allison Anders (Gas Food Lodging) – to direct four segments, all connected through one single character, that of Ted the Bellboy.

Allison Anders gets the first story. It’s all boobs, all the time. The story is a coven of witches who are holding a ritual in the Honeymoon suite in order to revive an old witch who had been curse in that room. One witch, Eva (Ione Skye), was supposed to bring sperm, but she failed. The story is the quest to get the sperm.

Alexandre Rockwell gets the second story, and is about a sex game where a married couple hired a Ted to play the wife’s secret lover. When Ted the Bellboy goes to their room, he’s mistaken for the hired guy, and gets involved in a psycho-sexual game of violence.

Rodriguez gets a story of two kids who are left on their own on New Years Eve, with Ted the Bellboy as a reluctant babysitter.

Tarantino gets the final story, where he directs himself as a Hollywood producer who makes a bet that his friend can’t flick a lighter 10 times in a row.

Given the hypersexualized nature of the first two stories, this movie did not go well with my parents… Especially the tit-laden first story, though it has a certain sweetness to it.

Four Rooms, over all, is a middling failure. Tim Roth’s Bellboy is a tic-laden performance that practically demands you laugh at it by holding a gun to your head. THIS IS FUNNY, he practically screams at the audience. The last two stories are genuinely funny. Rockwell’s story is a bit of hilarity that grows on you over multiple viewings But, Anders’ story is far too sweet for the movie.

In fact, Four Rooms was only released once, or maybe twice, on a barebones DVD. The only copy at the video store is a non-anamorphic, letterboxed film. This tells you how popular the movie is.

Madonna as Elspeth
Madonna’s role as Elspeth is a tertiary role in a short segment of a movie. She has more screen time here than she had in Shadows and Fog, but only just barely. Madonna’s role seems like something she could knock off in a weekend. She walks in a hotel, talks a little, dances a little, and is done. In fact, I think she disappears for some of the group sequences.

But, she’s still here, and demanded credit for her role (which she didn’t for her cameo in Blue in the Face). She’s introduced as a demanding Hollywood type, right in Madonna’s wheelhouse, especially from Dangerous Game.

Silly, quick, demanding. She’s actually good in this role that doesn’t demand anything from her. But, that’s the benefit of being in a story where you don’t have to do much heavy lifting. The following scene is the most dialogue she gets. Everything about this role is practically pantomime. (The following video is also NSFW)

One of the signs of a professional actor is knowing exactly how you’re hitting your mark and the timing of your movements. One of the directors of Sarah Michelle Geller praised her ability to hit her mark time after time after time, and to nail the timing each play through. The primary reason is so you can easily shot match. If you notice, Madonna’s head raise at the knocking, and then she raises it again when Valerie Golino speaks. Unprofessional, but also a sign of speedy filming and bad editing.

The thing to notice is that she never exposes her breasts, she is playing with fetishistic fashion, and the sex in the scene is treated with a tongue-in-cheek wit. Instead of using female sexuality as a weapon through the patriarchy, she’s having fun with sexuality. This is in line with her video for Human Nature. Madonna is done apologizing. She’s just here to have fun.

Julius
Four Rooms marks the end of the Madonna era started with Justify My Love. Madonna has gone from wielding sex as a weapon to apologizing for being so sexual to using sex as a lark. It seems like forever ago that I started this project, but we’ve only covered a decade of Madonna films, and there are two distinct eras of Madonna so far: Madonna as girl and Madonna as sexual woman.

Madonna as girl included Desperately Seeking Susan, Shanghai Surprise, Who’s That Girl?, and Bloodhounds of Broadway. But, Madonna as sexual woman started with the surprisingly sexual performance in Dick Tracy, and continued with Truth or Dare, Shadows and Fog, A League of Their Own, Body of Evidence, Dangerous Game, and Four Rooms. That isn’t to say that sex is off the table forever, as we’ll see in next week’s Evita, but that Madonna’s roles as a purely sexual object have come to an end. 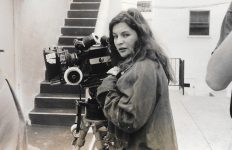