It’s one of the higher-class films that we’ve ever done. I think people have to see it again and realize, oh yeah, it’s pretty crappy. And then they’ll be fine. —Mike Nelson

The first time I saw Carnival of Souls, I went into it blind. I knew the name, but that was about the only thing I actually did know about it. (Yes, I watched it because it starts with “C.”) I think I had an impression that it was not merely bad but Ed Wood-level bad. I was pleasantly surprised to find an atmospheric and moody piece, not a failed horror movie but a successful, or anyway mostly successful, psychological exploration. With, yes, some clear horror trappings and basically a horror plot.

Yeah, I know. “Not really a [genre]” is one of those phrases that pops up in a lot of film criticism a lot that gets looked down on, and I think rightly so—not least because it’s often used to denigrate the genre as much as the film. But I’m going to defend its use here, and while I grant you I’m not a huge horror fan, I’m certainly not trying to denigrate the genre. As a warning, I’m probably also going to use the phrase “tone poem” in cold blood. Be aware.

Certainly the movie has clear horror trappings. Mary Henry (Candace Hilligoss in her first and practically only film appearance) is in a car with two other young women. They are racing a couple of young men, who nudge the women’s car as they cross a narrow bridge. The women’s car is pushed into the river and lost. Mary staggers out of the river somehow. Almost immediately, she leaves town to take a long-planned job as a church organist in Salt Lake City, Utah. She chooses to drive there, which I’m not sure I would, but anyway at sunset, she drives past the derelict Saltair Pavilion and becomes fascinated by it. She is also apparently being followed by ghostly apparitions and has an experience or two where she is not entirely certain she is real.

I won’t dispute that the movie has its howlers. She encounters Dr. Samuels (Stan Levitt) in a park, where he tells her he’s a psychologist, but in his office, he says he is not. So there’s that, I admit. On the other hand, given it was shot in three weeks on a shoestring budget by a guy whose other best-known works include “Why Study Industrial Arts?” and “Shake Hands With Danger,” I’m willing to forgive a little. And after all, I certainly do not claim it’s anything like a perfect film.

Frankly, though, the first problem here is that we’re watching a colorized version, here. This is a thing that RiffTrax tends to do that they need to stop doing. Just because a movie is in the public domain is no reason to go for the colorized version. There’s never a reason. Okay, so it isn’t as bad as the colorized version of From Here to Eternity that my sister told me about once, where they gave Frank Sinatra brown eyes, but still. For some reason, the colours in colorized movies seem to be chosen by people with little or no colour sense.

As I watched, I could see places in the film where the contrast of light and shadow was what was important to the scene’s impact. And instead, what we were dealing with was garish and unrealistic flesh tones that missed the—yeah, delving into Pretentious Art Speak again—chiaroscuro that made the original shot as relatively powerful as it was. There was one brief moment of snark about the film’s appearance in the Criterion Collection, and I wanted to shake the guys and point out that, by using the colorized version, they’d destroyed at least some of what presumably made the folks at Criterion decide it was worthy of inclusion.

Also, yes, by thinking of it as a horror movie, they’re pigeonholing it wrong and applying standards that make the movie look worse than it is. I certainly won’t dispute that the movie has horror elements. The appearance of those ghouls, or whatever you want to call them, for example. Certainly Mary is haunted by The Man (director Herk Harvey), not to mention the ominous Saltair Pavilion itself. There are hints that there may be even more to it than that, and certainly it is made abundantly clear that neither science in the persona of Dr. Samuels nor religion in the persona of the minister for whom she works (Art Ellison) can help her.

But more important, frankly, is the imagery. What matters is not the jump scares but the mood that is being set, and that’s where we get into the dread Tone Poem. After all, for large amounts of the movie, what Mary is being haunted by is the image of a building, not to mention a neighbour whose name might as well be Rape Culture (Sidney Berger). Even in the moments where no one can hear her, it still doesn’t feel to me like a horror movie experience. Maybe it’s because, even in the first few moments of the movie, it feels as though there’s something fundamentally broken about Mary; what happens to her would not necessarily happen to us, and empathy and fear for ourselves are at the heart of horror.

This is, perhaps, the meaning of those long, lingering shots of the Saltair, the importance of Mary’s flatness of affect. And that, I think, is what Mike Nelson has wrong when he talks about how crappy it is. I can’t see Joel Hodgson calling this movie crappy, because I think Joel has an understanding of and a love for movies that Mike does not. Mike isn’t much of one for tone poems and ominous mood, and he sees this as a failed horror movie.

There is much to love in Carnival of Souls. I also believe there is much to love in RiffTrax. And, indeed, I had a good time at the intersection of the two. On the other hand, I find this movie so fascinating on its own level that they don’t belong together. After all, this is a movie made while its director and writer were on vacation from making educational shorts. Rather than talking about “Pork: The Meal With a Squeal,” he was getting inside the head of a woman in extraordinary circumstances. And basically, that didn’t come up, because that would be more empathy for the movie than I feel Mike really has. There was one brief reference at the beginning, before the movie started, and that was it.

Don’t get me wrong; I don’t want to own the Criterion edition of this. But I won’t be buying the RiffTrax, either. Once was enough. I’d rather think of the film’s shadowed beauty and eerie mood, and I suspect Joel would, too. After all, it’s public domain—they could have done it on the show. 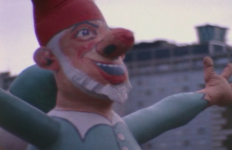 Year of the Month: The Even More Total Inexplicability of FUN IN BALLOON LAND→