One of the two marquee titles this week is Minding the Gap, Bing Liu’s excellent documentary about skateboarding and cycles of abuse that’s getting a much-deserved Criterion release. This also means that Tony Hawk, a contributor to the special features, will be making his Criterion debut, unless I’m forgetting about his commentary for Jeanne Dielman. The other marquee title is Arbelos’ long-in-the-works 4K restoration of Bela Tarr’s Satantango, all seven and a half hours of it finally available in watchable form in the U.S. Otherwise, you’ve got the (by all accounts wonderful) CG-animated Lupin III movie, the future This Had Oscar Buzz entry Ammonite, and the Rutger Hauer Zatoichi riff Blind Fury, a triple-feature that should ideally be watched in that order. 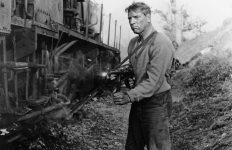