So, I know we here at The Solute have already reviewed Nine Lives upon its theatrical release back in August. NerdintheBasement’s review is how any sane human being would or should be watching the film. But, he understates how truly ugly and loathesome Nine Lives actually is.

The premise of Nine Lives is, indeed, that of so many Disney Channel movies: Kevin Spacey is a successful CEO far too busy to spend time with his family and has to become a cat to learn how to love. It’s a plot that’s been done 100 different ways if its been done once. From family animal movies (The Shaggy Dog) to family body swap movies (Freaky Friday, Vice Versa) to adult comedies (The Change Up, Switch), we’ve all been subject to the comedy of learning by seeing from a different perspective.

Director Barry Sonnenfeld knows we’ve seen this movie 100 times, and resents having to direct yet another one. Right from the start, Nine Lives is all about how much it hates its own existence. The opening credits play over a series of internet cat videos as Kevin Spacey deadpans “You think this is cute, don’t you? People are so desperate for someone to hold on to, they’ll take whatever they can get.” Nine Lives spends its first minute insulting the potential audience who would go see a movie where Kevin Spacey plays a talking cat.

A talking cat?!? Well, not really. Much like the David DeCoteau film, the cat doesn’t talk so much as Kevin Spacey does a voice over complaining about how much he hates everything. You see, Kevin Spacey plays Tom Brand, a skydiving take-charge executive of the holding company Firebrand. He’s trying to build the tallest skyscraper in the world, except some new building in Chicago is going to be 60′ taller and blah blah blah. The point is, he’s a gruff take-no-shit asshole executive far too busy managing his company to spend time with his family.

It’s not that Tom is unlikeable, its that every single person in this movie is an asshole. His wife Lara (Jennifer Garner) is a snide condescending woman who resents being married to a career man. His daughter, Rebecca (Malina Weissman), is a nothing of a character who spends her time watching Tom’s press conferences and memorizing every word he says. His drinky ex-wife, Madison (Cheryl Hines!) brings her bully daughter around to try to convince Lara to leave Tom. His oldest son David (Robbie Amell) is a pansy who lives in his father’s shadow. And, his top-most executive (Mr. Kelly Ripa, Mark Consuelos) wants to sell the company for some reason. Even Nine Lives‘ version of the small store mystical salesman and crazy cat lady (played by Christopher Walkins) is a bit of a jerk.

Even after Tom turns into the ugly-ass cat Mr. Fuzzypants (Tom Cat! Get it!), Tom remains an asshole for a good portion of the movie. He gets drunk, pees on the carpet, has hangovers, destroys the house, attacks people, and hisses and shrieks at everybody at all hours of the day and night. Mr. Fuzzypants hates life and everything in it. When his ex-wife visits, he calls out “Oh, joy! Satan’s here!” before peeing in her purse.

I’d say Nine Lives is misanthropic, but it’s too stupid to be that. It’s genuinely a cruel and mean-spirited movie that relishes in suicide jokes and corporate backstabbing politics. I lost count of the number of times the CGI version of Mr. Fuzzypants falls off a surface and lands in a painful position, a joke that is perpetually unfunny in such a stupid way. For over half the movie, Sonnenfeld makes us hate the characters as much as possible. And then, in the space of two scenes, Tom flips and spends the rest of the movie figuring out how to fix his family and his job.

Everything about this movie is the worst possible decision made at any given moment. From castration jokes to a suicide crisis climax (yes, really), Nine Lives is an ugly, disturbing, stupid, misguided, poorly acted, poorly directed, hateful movie that resents every moment of its existence. And, its that sheer density of resentment that makes Nine Lives so amazing.

Consider this scene when Mr. Fuzzypants is trying to get a box of Fruity Pebbles on a high shelf.

Lara: Is there such a thing as MRIs for Cats?

Mr. Fuzzypants: I should have landed on the knives.

It’s that type of loathing for its own plot mechanics that permeates through every single beat of this movie. You get the feeling that Barry Sonnenfeld felt like Mr. Fuzzypants while making Nine Lives. That’s not to say it’s poorly directed. Every actor, every camera angle, every physical prank, every line of dialogue is impeccably constructed to be a heightened and disturbed version of the more well-known examples of the genre. Sonnenfeld even has three separate ticking clock set-ups.

I highly recommend this journey through a psychotic version of the family film. You’ll hate me for it, but you’ll never see another movie like it.

Year Of The Month: Miller on BELA LUGOSI MEETS A BROOKLYN GORILLA→ 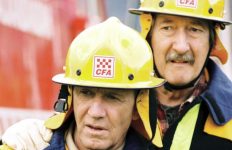 Year of the Month: David “Rosy Fingers” McFarlane on The Stupid and Enervating Tale of STRANGE BEDFELLOWS→