The best thing I can say about Paper Towns is that, for most of its run time, it’s a bland, inoffensive collection of images and sounds. But then the last ten minutes happen and… I’m getting ahead of myself. There’s going to be spoilers, but not yet. You’ll know when you get there.

If you don’t know, Paper Towns is based on a really enjoyable 2008 book of the same name by John Green, and is about a boy named Quentin and the girl next door, Margo Roth Spiegelman, on whom he has a massive crush. Margo is a wild, unpredictable, free-spirited enigma; the kind of person who might, in the parlance of our times, be called a Manic Pixie Dream Girl. And after one wild night in which she enlists Quentin’s help in revenging herself on her cheating ex-boyfriend she disappears. However, Margo has disappeared before, and tends to leave behind clues, which Quentin… I’m not quite sure why I’m recapping this, because the entire damn movie is in the trailer. He finds a bunch of clues and figures out where Margo is and goes on a road trip with his friends to bring her back.

One of the movie’s biggest problem is tone. Despite being a mystery, there is absolutely no sense of urgency or foreboding, and the stakes feel incredibly low. No one seems worried that this sixteen year old girl has gone missing, or takes it entirely seriously. Everyone assumes that Margo is fine, wherever she went. This makes a certain amount of sense from the secondary characters, the people who believe all the myths about Margo that are floating around, but the movie itself doesn’t seem bothered by her disappearance or concerned for her safety. On top of that, despite the main character being singularly obsessed with figuring out where she went, the editing is downright leisurely. In its smarter moments the movie uses this lax pacing to add some shading to its secondary characters, exploring the group dynamic and the way it changes when a pair of girls are entered into the equation. More often than not, however, the movie feels like a particularly bad Judd Apatow movie, hanging on scenes that feel like bad improv or random shots of things. There’s no better example of this than during the road trip from Orlando to upstate New York, which cuts between scenic traveling shots and a plain, hand drawn map that charms the characters’ progress. There are a few nice-ish shots, but it’s all empty, and set to really boring music to boot. (I freely confess that last part is pure opinion, but I’m pretty sure I’m right.) The cinematography doesn’t help matters, either, sporting a soft, naturalistic look that’s a little too picturesque. It feels like the movie is buying into the whole “this is magical and amazing,” pre-nostalgic mindset that the book subtly satirized.

Okay, I’m getting into the SPOILERS now. Fair warning.

So if tone is one of the movie’s biggest problem, the absolute biggest is that the movie completely misses the fucking point. The book is a deconstruction of the whole Manic Pixie Dream Girl thing, and when Quentin finds Margo at the end of the book she’s a complete mess. She’s dirty, disheveled, and effectively homeless, living in a shack in the middle of nowhere without any visible means of supporting herself. Her tragedy is that she started to believe her own legend and thought she could just disappear and live off the grid, despite the fact that she’s sixteen years old and does not possess any real skills of any sort. The novel ends with Quentin’s illusion of her being shattered, and embracing her as a real, complicated person. It’s touching, if not a little odd not to have told the deconstruction of the Manic Pixie Dream Girl from the point of view of the girl in question.

But, yeah, the movie fucks that up big time.

It all starts to go wrong when, after arriving and failing to find Margo, Quentin’s friends abandon him because they want to get back to Orlando in time for prom. Did they not just spend an entire movie bonding? Did they not just state over and over how important friendship is, and being there for each other? They’re abandoning him in the middle of nowhere for prom! So that’s character development for four people completely out the window.

Then, just as Quentin has bought a bus ticket back home, he runs into Margo… and she’s absolutely fine. Not a hair out of place, impeccable makeup, just walking down the street with a book in her hand. He catches up to her and she explains why she ran away, and then echoes the sentiment she said earlier that you can hear in the trailer, about living every day to its fullest. Then when he asks her if she wants to come back, she says she’s just going to stay there and figure herself out.

The worst part is, after he gets back in time for prom, and graduates and all that, he wraps up by saying that people are continuing to spout wild theories about where Margo is and what she’s doing. Margo was looking to escape being a Manic Pixie Dream Girl, but now she’s endlessly trapped in it. The people she hated will spend the rest of their lives deciding who she is, making her more unreal as time goes by. And the wistful, ponderous narration treats this as kind of amusing, when it’s really, really sad. 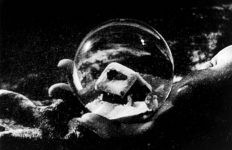