Walter Lord’s 1955 book of the same name and this 1958 film were and should remain the definitive story of the sinking of the Titanic. Lord sought to get the stories of the survivors on record while they were still alive, and this appears in the book and film’s multi-character, anecdotal style. Formally, there is no protagonist here, there are only antagonists–everyone is reacting to the disaster. Book and film are remarkably stripped down (in the typically excellent essay in this package, Michael Sragow makes the case that Lord’s book is the forerunner of much contemporary nonfiction): the brief pre-title scene is the christening of the Titanic; eight minutes later, the voyage is under way; four minutes after that, it’s the night of April 14th.

Director Roy Baker holds that stripped-down approach to pacing and filming all throughout A Night to Remember. This is a film about what people do, both in an everyday sea voyage (great moment early on as two clerks take stock of what’s on board: “eight hundred cases shelled walnuts, three thousand dozen fresh eggs, two hundred fifty five-pound jars Beluga caviar. . .“) and in reaction to a sinking ship. Without giving anything away or getting into foreshadowing, Baker cuts between all the decks of the Titanic, the officers and seamen running it (the radio operators provide a running commentary, first of the mundane details of the first-class passengers, and later of the desperate attempts of the Titanic to find rescue), and the other ships in the area (the California and the Carpathia among them). This is a necessary move for any kind of historic event like this–everything looks completely ordinary ten minutes before history happens. (Ridley Scott and team did this well in Black Hawk Down.)

Once the iceberg rips a lethal five-compartment gash into the hull, and Andrews (the ship’s designer) explains to Captain Smith (Laurence Naismith) that the ship will sink in an hour and a half, the plot shifts into one of the most effective plots a thriller movie can have–Beat the Clock. The hour and a half unfolds in very close to real time. Screenwriter Eric Ambler’s decision to follow Lord and have no protagonist here begins to pay off, because now everyone is vulnerable. No one has been set up as a point of identification,¹ so there’s no one we can guarantee will make it. We know the outcome of the story, but we’re still so damn interested because everyone’s life is in the balance here, and everyone is doing something.

The Beat the Clock plot works most effectively with the other ships. We see the closer ship, the California, miss the radio signals (they’ve shut down their radio for the night) and ignore flare after flare sent up by the Titanic. It’s clear that this isn’t malice but the kind of everyday carelessness that happens so often in this world. The Carpathia, 48 miles farther away,² immediately starts answering and heads toward the Titanic, and it’s clear they’ll get there three hours too late. There’s a simple, horrifying repeated shot of the bridge of the Carpathia with its clock visible in the background, letting us know (without any dramatics) that they’ll never make it before the Titanic sinks.

It’s in the range of human action that A Night to Remember becomes emotionally overwhelming. Smith kicks it all off by saying “there must be no panic,” and we see a series of people doing their jobs. (One thing that the professional behavior of the crew tells you, without any dialogue, is that being on a ship is a job that might get you killed, and they know that.) We see the way boats get lowered into the ocean, the way the crew keeps the batteries going so the lights can stay on (and that everyone gets their tea just the same). Among the passengers, some keep an all-night poker game going; some get their children to safety; some decide to go down with the ship; and second-class and steerage passengers try and get past locked gates to the top deck, and the lifeboats. The sound design is particularly effective here. As things get more chaotic, the background fills up with more sound and screams, and Baker plays that off against the quiet of some interior scenes, so that there’s foreground quiet but background noise as some passengers gradually realize, hey, this is serious.

There’s an extremely powerful visual trope and metaphor at work here that I didn’t catch until my most recent viewing. The first-class passengers all sit or stand plumb-line straight, even when they’re in motion; Smith also demonstrates, early on, the absolute levelness of the ship by standing a pencil on end. (Radio messages are brought to him on a silver tray, which will forever be my go-to image of the era.) The second-class/steerage passengers and much of the crew are in motion, working, dancing, playing soccer with the ice that falls from the iceberg. At The Dissolve, a commenter asked about films that described la belle epoque–the era from 1900-1914 that’s been described as the Indian summer of Western civilization, the last beautiful era before everything turned to shit and mud and phosgene in the Great War.

A Night to Remember conveys exactly that, through posture and through the ground plane. Because, of course, as the clock keeps running it’s the level surface of a ground plane that gets progressively destroyed (this is done with practical effects–the sets were built on hydraulics that tilted them), and along with it the order of society–the center does not hold and things fall apart in all directions. Some lifeboats are overloaded and others underloaded. The crew gets issued guns (“it’s every man for himself now,” and that sentence is the definition of a society disintegrating) and so very many get left behind. People start falling, then jumping into the water (an image that’s even more disturbing after September 11, 2001). Things that were stable for the whole trip start moving. And the aristocratic posture appears less and less, as everyone struggles to keep upright in a world that won’t allow it any more. 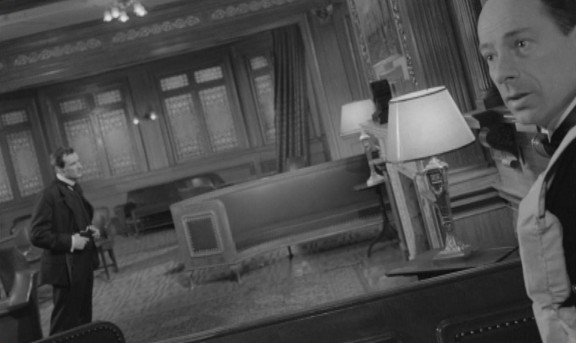 This is a work about professionals, by professionals; there’s no auteurist stamp here, no attempt to show off, no attempt to superimpose another narrative on these events, something that goes all the way back to Lord’s straightforward narration.  Lord, Ambler, and Baker all convey the events of this night as clearly as they can.  Like the images, the performances are uniformly professional, undistracting, and excellent; no one’s trying to be a star and no one is there for emotion.  Everyone has something to do and does it.  If there’s a standout, it’s Michael Goodliffe as Andrews (that’s him on the left just above). It’s clear from the moment he sees the water in the fifth compartment that he knows what’s going to happen and he’s going to go down with the ship, and for the rest of the film, he moves through it like a ghost already dead, occasionally giving advice on how to survive. (He talks to a married couple that’s a neat bit of intertextual casting–future Bond girl Honor Blackman as the wife and as the husband, John Merivale, who looks like the result of a George Lazenby/Roger Moore DNA splice.)

There are two remarkably theatrical moments near the end that say so much about what this film is about. (By “theatrical,” I mean simultaneously artificial and effective as all fuck.) The first comes as the Titanic heads into its final dive, and the remaining passengers have all climbed (climbed) to the stern. And they start praying, and the camera goes from person to person, the prayers and voices are so individual (and the prayers are in different languages too), it’s a brief, overwhelming Requiem. (There’s no attempt to give anyone here any backstory, and no need to. We know these are people, we know they’re going to die. As David Mamet sez, we in the audience will believe anything that we are given no reason not to believe.) The second comes after the ship has sunk, after the Carpathia has finally showed up, and Kenneth More (as Second Officer Lightoller) gives the one speech of the film, about how he’ll never be sure of anything again; it bookends a conversation he had at the beginning of the film where the Titanic gets described as “a symbol of progress, of man’s final victory over nature and the elements.” It works because it’s exactly right, because for so many people the sinking of the Titanic was the demonstration, two years before the Great War, that the world wasn’t actually as safe or sure as they’d thought they’d made it, and it never would be.³ A Night to Remember succeeds as both straightforward docudrama and an allegory about the end of an era.

¹Any implication of Fuck You, James Cameron in this or any other sentence in this essay is strictly intentional.

²As indicated by a 1912 map included in the Criterion booklet. This is a re-release, and it has a typically lush transfer and informative-as-all-fuck extras. I haven’t fully checked it all out, but the use of historical material in the booklet is itself worth the price of the DVD set.

If I honestly sort out my memories and disregard what I have learned since, I must admit that nothing in the whole war moved me so deeply as the loss of the Titanic had done a few years earlier. This comparatively petty disaster shocked the whole world, and the shock has not quite died away even yet. I remember the terrible, detailed accounts read out at the breakfast table (in those days it was a common habit to read the newspaper aloud), and I remember that in all the long list of horrors the one that most impressed me was that at the last the Titanic suddenly up-ended and sank bow-foremost, so that the people clinging to the stern were lifted no less than three hundred feet into the air before they plunged into the abyss. It gave me a sinking sensation in the belly which I can still all but feel. Nothing in the war ever gave me quite that sensation.

An earlier draft of this essay originally appeared in Let’s Dissolve the Criterion Collection, curated by Raoul Gonzo on The Dissolve. 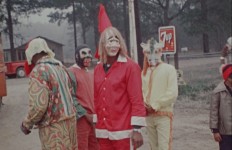 New Modes for Old Truths: Les Blank and the Living Past→ 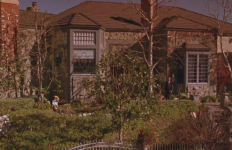