Damien Chazelle’s Babylon opens with a sequence that recalls the old joke about elephant enemas and show business, executed in grosser fashion than you would imagine even an anecdote about pachyderm poop could approach. The movies follows this up with an extended sequence at a 1926 Hollywood Hills bacchanal/quasi-orgy. It’s a rousing start, sustained largely thanks to a score by Justin Hurwitz that’s hot enough to justify many camera pushes into the bell of a trumpet.

We meet our motley cast of characters: Manuel Torres (Diego Calva), a fixer for the studio who has dreams of getting on set instead of running interference when a girl overdoses in the boss’s upstairs; the self-named Nellie LaRoy (Margot Robbie) who pushes her pure party girl toward a shot at fame; the jazz musician on the other end of that trumpet bell, Sidney Palmer (Jovan Adepo) who posits the cameras are “facing the wrong way;” and fading star of the silent era Jack Conrad (Brad Pitt). The over-the-top decadence is just another night for these four and the party declares from the start that Babylon will make nods to two previous Babylons: The sequence in Intolerance depicting the historical Babylon on the brink of collapse, and the Kenneth Anger book Hollywood Babylon that never let veracity slow down a good story.

The sustained pitch of the first hour invites fear of a hangover for the next two, but if anything Babylon kicks into a higher gear when the characters enter a manic outdoor studio shoot the next morning. Uppers get passed around as hangover cures and multiple directors, unencumbered by sound and unbothered by setbacks (a fire isn’t a problem if it’s no closer than the set next to yours), shout direction and profanity as they race the setting sun. Chazelle makes the triumph of the perfect shot at dusk so exciting you don’t wonder why everybody clambers over each other for the chance to get abused in the name of cinema.

Soon Manny attends an advance screening of The Jazz Singer and immediately realizes a major change has arrived. This leads to a tense day for Nellie on a hermetic stage where a sound technician reigns and the precision of dealing with the inflexible new technology kills the spontaneity that defined the rambunctious silent shoot. The scene is played half for laughs and half as a white-knuckle thriller, investing the audience in getting everything to line up just right so they can complete a single take. It’s also the first remix of a scene from Singin’ in the Rain from which Chazelle adopts cues (including a large cast rendition of the then-current titular song) as though the audience won’t recognize some of the most iconic sound-to-silent scenes in movie history.*

Eventually the thrills flag and the movie has more trouble finding purpose in its song and dance, and not for lack of trying. Our central quartet introduce several competing possibilities to follow, though the movie can’t quite settle on a distinguishing one. The transition to sound in particular has already been covered in more than one iconic movies (Chazelle’s script has some zingers, but nothing to match “It’s the pictures that got small”). At one moment – when Manny gets promoted and Sidney’s film career takes off – it looks as though we’re in an alternate history where Hollywood realizes how it stunted its own creativity with bigotry. But it’s soon clear that, as in the historical Hollywood, everyone will have to hide their true selves or get cast aside by the system.

Ironically, it’s the cast’s most old-school movie star that feels the most superfluous in this search. Pitt takes his Cliff Booth mode to sadder places and his arc as a man always living on the edge of oblivion now facing extinction is the most familiar and superficial. His Singin’ in the Rain moment is the “I love you, I love you, I love you” monologue now refashioned as a crushing moment for Jack. Off-screen problems with dangerous characters eventually steer the movie into more harrowing – though never uninteresting – directions, and the film stands ready to collapse under its own weight at any moment.

And yet for all my hemming and hawing about the wherefore, I’ve barely scratched the surface pleasures of Babylon – a gentle monologue about movie stardom from a Hedda Hopper-style gossip columnist (Jean Smart), the bisexual stylings of Lady Fay Zhu (Li Jun Li), a descent into a club out of a Gaspar Noé fantasy, and a parade of unexpected appearances – one show-stopper and a couple sneeze-and-you-misses. It’s a beautiful, sometimes brilliant, almost always exciting, lovely work that almost – almost! – can make us believe the emptiness is part of the point.* It’s best when it embraces the moment. We may see these recent years of studio movies as another Babylon falling, but right now you can’t say there isn’t somebody trying to keep the party going.

* Although… I have to fight a strong urge to discuss the very end of the movie which, while also leaning on a couple extremely familiar tropes, retroactively makes a strong case for the movie as something higher than regular Hollywood self-aggrandizement – or maybe as a worthy entry in the Hollywood self-aggrandizement category. After the high of a three-hour marathon, it’s refreshing to let it wash over you.

[Update: Margot Robbie’s name was corrected from an earlier version.] 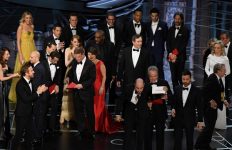 Morning After: That Moment (a mis?reading)→ 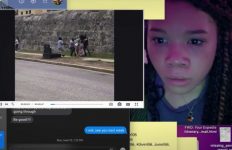