The most interesting thing about Saw is that it is simultaneously a pioneer and a First Film. Much like Star Trek, this is the origin point for a whole subgenre – the “torture porn” fad of the 00’s, in which horror movies concerned themselves with increasingly elaborate and brutal ways of killing people as a way of inducing fear. And much like Star Trek, so much of its success is rooted in fusing together a few old ideas with a few flagrantly original ones. The bloody violence is what people remembered, naturally; the reverse bear trap is the iconic image, the original spark of imagination for the movie, and what every sequel and imitator was, in its own way, ripping off. But I think these all missed the greatness of the initial image laid out in the opening ten minutes – two men waking up in a dingy, revolting toilet, chained to the wall, a dead body inbetween them, two handsaws, and two tapes telling them to kill each other by six o’clock. From there, the story has a very Law & Order like sense of procedure, as every scene thereafter breaks down how this image before us was created; both literally, in the sense of revealing how each man got kidnapped and the procedures that keep them there, and emotionally, in explaining what transgressions they committed that would cause someone to kidnap and torture them. The mystery is genuinely cool and compelling, and the story follows through on it. I can see why viewers and filmmakers alike would look at this movie, say “That’s what I want to see more of,” and then miss the point in favour of brutality and monologuing.

At the same time, there’s a mixture of genuine talent and immature storytelling in this film that makes it endearing as a snapshot of two artists right at the start of their career. Many of the plot details are artlessly lifted from cop and medical procedurals, and although admittedly some of that mixture is entertaining in its own right, it means there are some long, dry sections spiced up by bloody violence. It also leads to some absurdity like a detective carrying a shotgun for some reason – I know that kind of thing depends on your taste for verisimilitude, but there’s a difference between willingly doing something goofy on purpose and stumbling into it because you don’t know what you’re talking about. More dangerous to the movie’s entertainment value is the childish cynicism. The movie is powered by disgust, not just in the gruesome ways people can be killed, but in the shitty things people can do on a day-to-day basis – Jigsaw does what he does because he hates that people don’t appreciate their lives, and his targets commit sins that are downright petty in their self-interest. Say what you will about The Sopranos, it shows a very great capacity of imagination for things to be disgusted by.

What counters and in some cases subsumes this is a much greater childlike glee. Director James Wan is limited by his young person creativity and even more by his young person resources – he has mentioned being frustrated at having so few takes to work with on Saw due to the fast filming schedule – but he has a tremendous resourcefulness and a clear-eyed view of the task in front of him; much of the movie is conversation between two people, and he finds new and inventive ways to film each one, underlining different emotions to different degrees. And for all the cheesiness and cliche, I do find myself moved by the ending in the way I was supposed to. Trauma is not an empowering experience – rather, it’s an enfeebling one that its victims must treat as a sickness to be even close to functional in a way people haven’t been traumatised is. Empowerment comes from actively choosing to take on pain, and the moment Lawrence decides to cut his goddamned foot off, it’s as if all the fronting of both character and movie has fallen by the wayside – Adam, about as good an expression of a disaffected white douche as you can get, finds this above and beyond what a human being should be capable of seeing and is reduced to a crying bystander. After killing Zepp together, Lawrence is emaciated from blood loss, survival stripped to its purest, promising Adam he’ll return with help, the slimmest possible hope. It makes the final reveal that much more joyfully cruel – the body of the dead man rising in the background is already uncanny without the context, and when Jigsaw slams the door closed, it’s as if Adam’s life and the movie with it is being snuffed out like a candle. 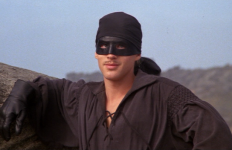 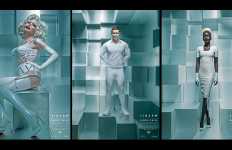 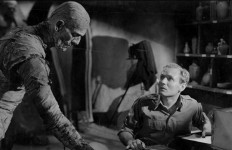