Browse: Home / SEA OF TREES is an absolute disaster

Gus Van Sant has, thus far, had two comebacks. The first one followed his disastrous adaptation of Even Cowgirls Get the Blues with the well-received black comedy To Die For, a studio movie that still left plenty of room for Van Sant’s sensibility. The second came after Van Sant started gathering dust as a studio filmmaker with Finding Forrester, a fairly blatant rehash of Good Will Hunting‘s story (although I think it’s genuinely underrated), leading him to make several of the best films of his career, including the Death Trilogy and Paranoid Park. I believe this can happen again for Van Sant. I hope it happens again, because the triple-whammy of Restless, Promised Land, and now this is terrifying if it’s how he’ll choose to run his career from now then.

Promised Land‘s problem (aside from an ending that was a terribly bad idea) was its overwhelming blahness. One gets the sense that Van Sant’s cameo in Jay and Silent Bob Strike Back pretty accurately describes what he was like during the making of it. Restless‘s problem was its overwhelming tweeness, and how that tweeness is directly lifted from other, better movies (the basic outline is stolen from Harold and Maude, with some Wes Anderson thrown in, including using Nico’s “Fairest of the Seasons”). Sea of Trees helpfully combines the worst of both worlds, marrying a dispassionate directorial hand with godawful, death-obsessed source material that has a jaw-dropping twist ending. It’s not twee, but by the end, you’ll be begging for harmless whimsy instead of what we end up getting; Nicholas Sparks’ 21 Grams.

I’ve outed myself as a semi-defender of Alejandro Gonzalez Inarritu in the past, but 21 Grams is not one of the films I’ll ever go to bat for. It and Biutiful are the AGI films where the overwhelming bleakness feels like a crutch more than a natural view of the world, and Grams isn’t helped by the needless obfuscation of its structure. Based on the results, Trees‘ screenwriter, Chris Sparling, is a student of AGI and Guillermo Arriaga, creating a film suffocating in grimness, filled with suicides, extreme depression, car accidents, and brain tumors, while seemingly being very impressed by his own ability to fake out the audience. The film has a flashback structure which sets up that a character will die by the end of the flashbacks. But Sparling reverses the second-to-last and the last flashbacks (by the way, the last flashback, played before the second-to-last flashback, is a real howler; it combines the wonderful hackiness of symbolic mailboxes and on-the-nose Google searches) just so we think the character died a different way than they ended up dying. Whoa, man, you really got me there. The comparison isn’t helped by Naomi Watts (in what appears to be a very bad blonde wig) showing up to play a troubled, booze-addicted character. But at least that film followed up on its bleakness to the very end. This movie’s ending would be like if 21 Grams ended with Benicio del Toro revealed as Danny Huston in disguise, ready to continue his marriage to Watts.

Whatever one can say about AGI, he makes movies that often look great and which feature many great performances. Van Sant gets that half-right. This movie looks fantastic. Working with cinematographer Kasper Tuxen (the DoP of Mike Mills’ Beginners), he creates gorgeously murky images of trees swallowing our main characters (my favorite shot is Matthew McConaughey sitting below a mass of tree roots, like a tamer variation on Antichrist‘s poster shot), full of beautiful emeralds and soft beams of light. But Van Sant couldn’t even be arsed to get much out of his talented performers. McConaughey spends the film coasting on his sad/serious face like he spent the pre-McConaissance era coasting on his sexy Texas boy image. It’s a dull performance that’s still somehow the best one in the film. Watts is doing a much lesser version of her Grams character, not even getting to play a fuck-up so much as someone who’s just vaguely kinda angry (this is probably more the fault of Sparling not writing her character well enough). And poor Ken Watanabe gets the least to do out of them all (his character is that he’s sad and he likes water and An American in Paris), even leaving out the way Sparling and Van Sant majorly fuck him over at the end.

About that fucking-over. The film was massively panned and booed when it premiered at Cannes last year (although in comparison to the shellacking this year’s The Last Face got, it won the Palme), and I can guarantee you that even those boo-happy Frenchmen wouldn’t be arsed to make a sound at the end of this movie if it had any ending besides the one it has. The first part of the film is actually alright, following in the footsteps of Van Sant’s Gerry in the fascination in finds in a well-dressed, silent McConaughey travailing the forest in search of a place to die. The portions after he finds Watanabe are mostly mediocre, turning actively bad when they start monologuing, and the flashbacks to McConaughey and Watts’ life together are very bad, full of petty, uninteresting bickering. But the ending, hoo boy. There will be SPOILERS from now on but I highly encourage you to read beyond this, especially if you haven’t seen the movie.

The film’s final comparison to Restless proves to be in Watanabe. In Restless, the main character talked to a dead Japanese kamikaze pilot who beats him at Battleship and gets moody whenever someone mentions Hiroshima. And yet that awfulness proves to be a mere warm-up for what Van Sant and Sparling have up their sleeves here. Yes, Watanabe is a ghost… but he isn’t even afforded the dignity of being his own ghost. No, he is Naomi Watts’ ghost, stuck in Purgatory/the forest until she told her husband to not feel as bad I guess. That’s terrible. And yet that’s almost just a warm-up for the film’s worst moments, which are the lengths it goes to tying Watanabe’s cryptic mumblings to Watts. Watts also like water and An American in Paris. A throwaway comment about McConaughey being like Hansel of Hansel and Gretel fame is explained because *gasp* Watts’ favorite book is Hansel and Gretel. And, best/worst of all (explained by a throwaway character in the film’s penultimate scene), the names Watanabe gives as his family are actually Watts’ favorite color and season (yellow and winter), which McConaughey said he never got to know. Joy.

Like I said, the last time Van Sant fell, he came back with Gerry, which I think is a masterpiece (that’s helped by the contributions of the late, great Harris Savides, who should’ve come to Van Sant as a Japanese man and told him to set this script on fire and start over). If it took Finding Forrester to produce that, this may very well produce our new Citizen Kane. 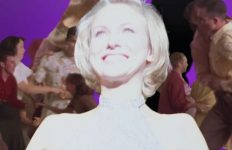 Year of the Month: George “Ice Cream Planet” Edwards on Coming of Age, Coming Out, and the Strange Journey Down David Lynch’s Mulholland Drive→