Last month’s Academy Award nominations launched a million think pieces about the dominance of the white male in film culture. Seven of the eight films nominated for best picture focused on a white male lead, and the 8th focused on a historical black male. The director category highlighted a ninth film featuring a white male lead. Many think pieces followed, focusing on the concept of white men, or men who are willing to make films about white men, being dominant forces in Hollywood.

Seventh Son feels like a knee-jerk reaction to these think pieces, saying “Yeah, white men are the dominant forces in Hollywood. Suck it.” The big question that Seventh Son asks is if a racist and sexist story is a bigger problem than a boring, well-worn, incoherent story.

At the start of Seventh Son, some guy is locking up some force in a cage on a mountain top. The voice warns him, “Gregory. You’ll regret this.” Apparently, this is Gregory. Time passes with a time lapse pan of the valley below, followed by a blood moon with a dragon popping up and out of the cage. This is obviously the enemy.

We pop over to a bunch of knights looking for Master Gregory (Jeff Bridges) because some bells are ringing. Gregory is drunk, hungry and selfish. He also sounds like he had a root canal and hadn’t worn off the Novocaine, or maybe Jeff Bridges is trying out for the role of Eliza in My Fair Lady. In any case, he turns out to have Yoda fighting skills because he’s a knight, and sets off to save whomever. He is obviously a good guy.

That whomever is a young girl who seems to have been possessed by the devil. In a scene straight out of The Exorcist, she’s blatantly challenging and taunting Gregory, until he blows some magical silver dust onto her. Wait, she’s not been possessed by the devil, but by a dragon? The same dragon that escaped from the cage? Unfortunately, possession by dragon is the most interesting idea in this terrible film.

The dragon is actually Mother Malkin, a white female witch who is feeling a bit bitter after suffering defeat at Gregory’s hands and being locked up for decades. She fights valiantly, and, at the end of this initial battle sequence, she kills his apprentice, Kit Harrington.

Mother Malkin, played with scene-chewing glorious camp by Julianne Moore, assembles her own team of witches. She starts out accompanied by her white female sister and her sister’s half-Gypsy daughter. Soon a litany of reductive racist stereotypes show up to help her. One is an evil black man (Djimon Hounsou, who deserves better than this) with a bunch of black-face-masked assassins. Another is a black female who can turn into a Cheetah. The Indian character from Street Fighter II shows up, who I think can turn into a tiger. There’s also a guy who has purple skin and four arms. There might have been an East Asian stereotype in there too, but the final setpiece is so incoherent I couldn’t count them all.

To sum up, the two white guys have to dispatch this team of women and minorities to save the world. Along the way they’re assisted by the criminally underused Olivia Williams, also a duplicitous witch, who just happens to have a witchy looking stone amulet she gives to Tom (who never questions the markings on the amulet). I don’t really know what the white guys are saving the world from, or what the witches plan to do with the world. That’s how great this story is. It doesn’t care about the intent of the witches, it just wants you to know that they’re women and minorities, thus making them evil incarnate.

Otherwise, this film is so generic and moderately cheap that it can’t even rise above its terrible subject matter. Ben Barnes is so bland that you spend the whole time trying to figure out if he looks like anybody. Jeff Bridges just stumble-mumbles through the part, and you suspect he might have actually been drunk during most of the shooting. Moore and Williams are barely on screen enough to fully enjoy them. The action set pieces are directed competently, except for the final which is a mess. To top it off, there is a romantic subplot so terrible you should forget it ever happened.

I spent my time wondering how I would make this movie better. And, I figured it out. Mother Malkin, who is a witch, is imprisoned by her alcoholic husband. She spends years gathering her strength before she can escape to get her revenge on him. She gathers up a band of outcasts in order to destroy her violent drunk now-ex husband, and together they go on a journey to conquer the world. Sadly, that’s all left in the margins.

That this movie is directed by a white male Russian should come as no surprise. It is pure propaganda, and it is boring to boot. 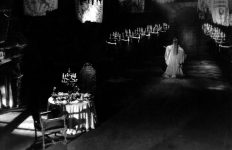