Browse: Home / SIFF Dispatches: AT THE END OF THE TUNNEL

One of the weirdest aspects of the Seattle International Film Festival is our Golden Space Needle award. The Golden Space Needle is our audience award, and it is based on ballots collected at the end of every screening where the audience rates a movie on a scale from 1-5. Without knowing the exact formula, it seems that the more well attended movies have a higher chance at being ranked higher than less attended movies. Sometimes, we get expected results (2014’s Boyhood, 2016’s Captain Fantastic) but we frequently reward curiosities and obscurities (2010’s The Hedgehog and 2013’s Fanie Fourie’s Lobola).

This year’s winner is the Argentinian film At the End of the Tunnel, a Hitchcockian potboiler about a wheelchair-bound protagonist, desperate for money, inserting himself into a crime when they a gang of criminals dig a tunnel beneath his house to rob the bank down the block. Joaquin (Leonardo Sbaraglia) is a computer bound engineer who works in his basement where he listens in on the conversations happening in the basement of the next building. His plan is to figure out when and how the heist is going to take place and try to skim a little off the top…literally. The initial plan is to move the money on carts back and forth along the tunnels, and he’ll just reach down and grab the money as it passes. Things get complicated. Chekhov never put so many of his guns into a play.

On the one hand, At the End of the Tunnel is an expertly directed suspense movie with echoes of Rear Window and Bound. Writer-Director Rodrigo Grande keeps us to a confined set of spaces and expertly guides us through every possibility as the plot chugs along. On the other, it is incredibly stupid and wildly misogynistic. Sure, the movie is a modern equivalent of a trashy airport thriller where plot contrivances smash into plot contrivances, but who cares because we’re going on vacation. Grande expertly squeezes every bit of tension he can out of every single plot point and image in the movie. But, a whole plot thread hinges on a mute 6-year-old girl who was molested by her stripper mom’s criminal boyfriend. Grande also forces the stripper mom to spend the majority of the movie tied up in her underwear and drugged by Joaquin, the hero of the movie. The final female character, a butch lesbian type, suffers one the most tortuous deaths (but she kind of deserved it).

If you can set aside your distaste for plot holes (the end of the movie has so many plot convenience twists) and if you can ignore modern misogyny, At the End of the Tunnel is a finely crafted piece of throwback cinema. What’s odd is that those are two gigantic hurdles to overcome to win the Golden Space Needle Award, especially with a mixed gender crowd in oh-so-progressive Seattle. This is another one of our oddball wins, one that deserves a look but that I will probably forget about by the time I finish this series. 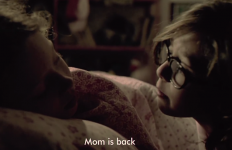 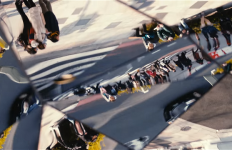 Lunch Links: HOME AWAY FROM HOME→