Browse: Home / Steamed Hams But I Overanalyse It

This scene demonstrates really well how comedy can come from following a character through a series of logical decisions to somewhere totally ridiculous.

Chalmers: Well, Seymour, I made it- despite your directions.

Even if you’ve never seen this show, even if you know nothing about these characters, you perfectly understand who they are and what their dynamic is. Skinner wants to impress Chalmers, Chalmers does not like Skinner all that much. There’s also a small but crucial word choice: “unforgettable luncheon”. We now know that Skinner will not use a five letter word when he has an eight letter one, which tells us a) he’s smart, and a bit stuffy about it, which raises the stakes slightly for a social situation and b) lays the groundwork for his decisions and the way he goes about them later.

Here we see a perfect example of the ‘but’ half of ‘therefore, but’ storytelling. Skinner wants to cook Chalmers an unforgettable luncheon, BUT he’s burned the roast.

Skinner: But what if… I were to purchase fast food and disguise it as my own cooking? Do ho ho ho ho, delightfully devilish, Seymour!

This line is what the kids today call ‘hanging a lampshade’ on the cliche this scene is engaging in – the whole ‘secretly using fast food to cover up burned cooking’ plot. But this goes beyond simple lampshade hanging because the really drawn out and hyperarticulate way Skinner formulates his plan makes it come across as him thinking he’s really clever for coming up with it, and not just in any generic way but in a way that feels really true to Skinner as a character. The story isn’t engaging in a cliche, Skinner just isn’t as brilliant as he thinks he is.

Song: Skinner, with his crazy explanations! The Superintendent’s gonna need his medications! When he hears Skinner’s lame exaggerations, there’ll be trouble in town tonight!

THIS, on the other hand, is straight up engaging in a cliche for laffs.

Skinner: Superintendent! I was just- uh, just stretching my calves on the windowsill! Isometric exercise! Care to join me?

Chalmers: Why is there smoke coming out of your oven, Seymour?

“That isn’t smoke” isn’t quite “yes and”, that classic improv tool, but it is driven by the same idea. Skinner can’t just say “there is no smoke” or walk off, but he has to explain what Chalmers is seeing.

Chalmers: I thought we were having steamed clams.

Skinner: D’oh, no! I said steamed hams! That’s what I call hamburgers!

Part of the reason I feel comfortable overexplaining the jokes in this video is because the thought processes we’re following move too fast to actually articulate it in the moment. For example, you’ll notice that Skinner has stopped umming and ahhing before his lies, indicating he thought up ‘steamed hams’ on his way back from Krusty Burger, and he starts them up again when Chalmers pierces his lies too much. Those ums and ahs also factor into that iconic moment coming up.

Chalmers: Really? Well, I’m from Utica, and I’ve never heard anyone use the phrase “steamed hams.”

Skinner: Oh, not in Utica, no, it’s an Albany expression.

Chalmer: I see. You know, these hamburgers are quite similar to the ones they have at Krusty Burger.

Chalmers: Yes, and you call them steamed hams, despite the fact that they are obviously grilled.

Skinner: Ye- You know, the- One thing I should- Excuse me for one second.

Skinner: Well, that was wonderful. A good time was had by all. I’m pooped.

Chalmers: Yes. I should be- Good Lord, what is happening in there!?

And there it is! After all his stuttering, Skinner delivers the most balls-out lie he’s told so far with such complete ridiculous confidence. And once again, it makes a weird kind of sense that a guy who uses words like “unforgettable luncheon” and “isometric exercise” would think “aurora borealis” would be a good explanation for the lights and colours in his kitchen. Chalmers’ response has the perfect amount of stunned outrage at the chutzpah of the lie.

Chalmers: May I see it?

This is the opposite of the “yes and” rule, but at this particular moment in the scene, it’s funnier to have Skinner give up and just give a flat-out no.

Mrs Skinner: Seymour! The house is on fire!

Just when you thought it was over!

Chalmers: Well, Seymour, you are an odd fellow… but I must say, you steam a good ham.

And now the scene slows down, giving us just enough time to soak in both Skinner’s sense of total victory, and the realisation that he’s allowed his home to burn down to avoid an awkard situation. 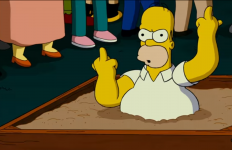 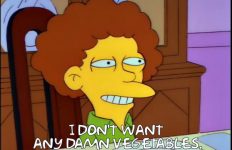 Taco Break: Shows You Weren’t Allowed To Watch As A Kid→