A lot of shows try to teach my kids creativity. That’s fine; I approve of that. My kids are relatively creative without it, because that’s their nature, but encouraging that nature is also important. I do that without the show’s help, but that’s not something every parent is equipped to do. Generally, it’s a concept I approve of. The thing about this show, however, is that it often feels as though it’s just kind of unfinished, as though they didn’t entirely know how to end various of the episodes, so they suggest to kids that they think of their own ending which might be better.

So Charlie (Jacob Soley) lives in Colorforms City, you see. For those of you unfamiliar with them, Colorforms are a toy made up of thin vinyl sheets that stick onto a plastic-covered cardboard background. Apparently this uses vacuum suction? We never knew, when I was a kid. Charlie is based on the Coloforms logo, and he has adventures with other Colorforms characters, specifically a girl named Violet (Saara Chaudry) and a boy named Red (Tyler Barish), plus Miss Weather (Zoe Hatz), the Silly Faces, and whoever else is necessary for the story the day’s episode is telling.

Preparing for writing this article is how I discovered that Miss Weather, and probably some of the others, were actually created by the Colorforms company in the early days of the toy. I never played with non-licensed Coloforms as a child. They exist, but what I played with was a Mary Poppins playset. You can get them for all sorts of intellectual properties as well. Apparently they missed out on Star Wars and were very upset about the whole thing. But it means that this whole “use your imagination to create whatever you want” idea is very confusing to me.

In my experience, children’s imaginations are populated by both what they create for themselves and what they see in pop culture. I would imagine this long predates TV; I’d pretty well guarantee children hundreds of years ago were playing Robin Hood, for example. My son, when he was fairly small, used to tell me that he had a brother, Ryan—specifically That Ryan Kid, who he knew from YouTube. My daughter filled our back yard with dinosaurs a couple of years ago, but she’ll also pretend to be Coraline or Dora.

The problem with this show, other than its being simplistic and not always having an ending, is that it cannot make a child’s imagination the way it really is without paying expensive licensing fees to include the characters that exist in other Colorforms sets. It would be interesting to have a show that really showed a child’s imagination that way, even if you had to develop the pop culture landscape for the child yourself and establish that, yes, they were toys they had and characters from their favourite TV shows and so forth. The one thing I’d note is that Sandy very seldom puts Charlie into her own imaginary play, even when she’s been watching this show a lot.

Help me buy actual Colorforms for the kids; consider supporting my Patreon or Ko-fi! 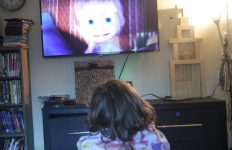 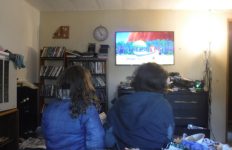 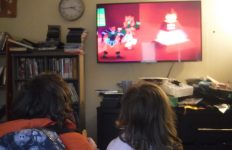 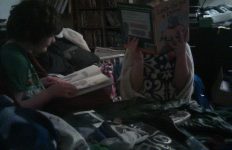 Stuff My Kids Watch: They Do Actually Read, Too, Including a Lot of Mo Willems→