Browse: Home / Stuff My Kids Watch: Inside the Horrific Consumerism of RYAN’S WORLD

Known in our house as “that Ryan kid,” eight-year-old Ryan Kaji holds the dual distinctions of being the highest-paid YouTuber and also being the first programming I flatly forbid my six-year-old son Simon from watching in my presence. To the point that as I write this, I have a sneaking suspicion the picture’s going to be late because I won’t have gotten around to letting him watch even a few seconds of it in my presence in literally years at this point and have had a hard time bringing myself to do so now.

Ryan has been at this since he was well younger than Simon. For almost five years now, he’s been haunting YouTube. The videos include such child-friendly activities as opening packages, playing with toys, and making enormous messes. Though they don’t always reveal it, the vast majority of the family’s videos are sponsored. He appears with father Shion and mother Loann, plus twin sisters Emma and Kate, and of late actual celebrity guests. Some of the videos are clearly shot in studios, some in the family’s opulent home, and at least one that I’ve seen was a travel video.

That last brings me to the one thing I will say I approve of about the whole thing. I’m pretty sure the family had traveled to a hotel/water park about twenty miles away from me, if I heard what they said right, but I can’t be sure how far they traveled—because the family does protect Ryan’s privacy at least somewhat. The first I knew his last name was while working on this article, and his parents are generally referred to as “Mom” and “Dad.” So far as I know, they still haven’t said what part of the country they live in, because the parents don’t want Ryan to deal with the kind of crazy adults a famous kid on YouTube might have to deal with.

Of course, that I don’t know where they live also means I don’t know if Ryan’s earnings have any legal expectation of remaining Ryan’s earnings, not that the Coogan Law definitely applies to YouTube videos like this. Few states have laws safeguarding the earnings of child performers in any way, and I don’t know if the Kaji family lives in one. Now, it’s possible his parents wouldn’t dip into it either way; it didn’t take those laws to prevent my cousin from taking his son’s earning as an actor, though they live in California so my cousin was prevented from it regardless. But I worry about this sort of thing anyway, because I know too many stories.

But even if Ryan’s income is totally protected, or his parents are putting it all in trust because they’re good people, or in some other way his money is safe, I still don’t like the show. Apparently, 90% of their videos, which are aimed at, well, kids my son’s age, have sponsored content, and they aren’t reliably labeled as such. Not that I’m sure Simon would know what that meant anyway, which is also a problem. Simon simply isn’t exposed to as many commercials as I was growing up, and I don’t think he’s internalized that people trying to sell him things will deliberately make them look better than they are.

I also loathe that there are many videos that involve some “challenge” or another that can be summed up as “they waste a lot of food.” A lot of gross-out stuff, for one. A lot of digging through food to find things. That sort of thing. And again, yes, that appeals to my six-year-old. But I don’t like that he sees it so regularly and presumably thinks that it looks like something we should try at home. The Kajis can afford to waste food; we cannot. And even if we could, I don’t approve of doing so. I spend enough time lecturing Simon about how you don’t need half a bottle of body wash to make a bubble bath.

It almost seems petty at this point to mention that, also, no one in the family can act. I don’t know what the father used to do, but the mother quit a job as a high school chemistry teacher to run her son’s videos—a new one is posted literally every day—and while she may have been an entertaining teacher, she also seems like one of those people who uses an “acting voice,” and it’s a bad one. The parents are clearly trying to act and are clearly bad at it; I might like the show better if they didn’t force themselves to be zany and instead just, you know, enjoyed hanging out with their kid.

I’m not a minimalist by any stretch, and I don’t actually limit my kids’ screentime, though I’m starting to get serious about things like “you have to do your work before you can borrow a tablet or watch what you want instead of what I want.” Because that, at least, I firmly believe in. But can Ryan even have a favourite toy, if he gets new ones essentially every single day? Can he understand that his life is abnormal? His reaction to other kids’ YouTube videos was “why aren’t I on YouTube?” So again, his mother quit her job and made him a YouTube sensation. I work really hard to convince my kids that not only do they not get everything they want, that it’s a good thing that they don’t. Does Ryan know that?

We have never bought a Ryan toy, not on purpose—we’ve once or twice gotten a kids’ meal from somewhere with one in it, and that’s it. Because I’m really uncomfortable with the whole thing. I wonder about what Ryan’s world is really like, and it makes me both sad and worried. I can’t explain this adequately to Simon, of course, and so he just watches as few of the videos as I can arrange. He doesn’t think Ryan is trying to sell him things; in fact, for a while, he insisted Ryan was his brother. This was years ago, and this was the moment where Ryan stopped being welcome in our home as far as I was concerned. He’s making millions by not telling Simon that he’s selling things; even my family isn’t that dysfunctional.

I make so much less than Ryan that his parents would barely notice losing my entire monthly income; help me out a little by contributing to my Patreon or Ko-fi!

Edited to add: Yes, the picture was late; that’s a kid who rides Simon’s bus every day next to him, since she’s come over for a while. 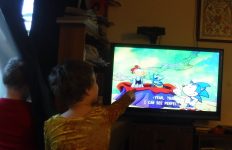 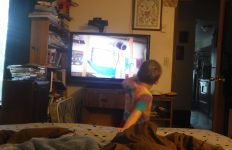 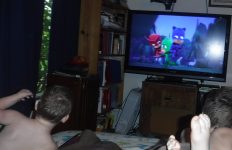 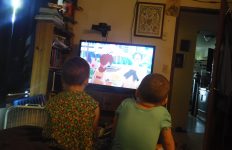 Child Endangerment and Cockfighting with POKEMON→