All of human culture has its origins in food preparation.  The earliest technologies were flaked stones for cutting and killing, and the practice of rendering food edible caused humans to develop their first algorithms and plans.  The human sense of time derives from the rhythms of the harvest, and the earliest deities all have some connection to food and bounty.  Human communities formed around–were most likely defined by–common cooking fires.  Every place and community has its specific foods, spices, and practices about same, and often uses those to define their differences from other communities (examples include the Book of Leviticus and Neal Stephenson’s Anathem); making and eating food turns a group of people into a community with its own rituals and meaning.

Cooking and eating are awesome, is what I’m saying, and there’s not enough of it on film.  Obviously, cooking and eating aren’t practices that work well with the multiple-take nature of filmmaking; there’s a scene in Traffic where Clifton Collins Jr. has to chug an entire glass of wine and even with fake wine, he made himself sick on it.  (You can never do enough takes for Steven Soderbergh.)   So almost always, any movie or TV scene about food–making food, talking food, eating food–will make me insanely happy.

Probably the first food scene I loved was the first dinner in The Big Chill, especially the cleanup afterwards to “Ain’t Too Proud to Beg.”  That film was never effectively about politics, because its characters were never effectively political (watch John Sayles Return of the Seacaucus Seven for a more political version of the story), it was about a community and the rituals and history that bind them.  And doing dishes, listening to Motown, and dancing like you don’t care are all part of that; my family needed music for the after-dinner table-clearing for years after that.

Other great affirmations of food and community:  Munich and Che, both of which come across as being not just about community but also identity.  Of course you’d bind with a bunch of fellow Jewish assassins with a big meal–what, you’re gonna get revenge on an empty stomach?  And it seems somehow so elementally revolutionary that you’d have a midnight dinner in Miami and plot to overthrow a government.  (Joan Didion’s Miami has a lot of dinners like this.)  One of the definitive scenes of food preparation belongs to The Godfather, so much about family; part of the Education of Michael Corleone is learning how to make a good sauce–“someday you might have to cook for twenty people.”  (I’ve never gotten into adding sugar to my tomato sauce, though.)  That throws forward to GoodFellas, with Henry Hill trying to manage guns, drugs, and a massive family meal all at once (“I’m stirring! I’m stirring!”); even better is the multi-course prison dinner, where Paulie does the prep work.  Watching people take care in what they do will never not be fun.  (“That was a good system.”)  In The Last Temptation of Christ, Martin Scorsese even makes the Last Supper part of this tradition–you’d love to hang out and eat with these Apostles on any night.

What say you, commenters?  What are your favorite film meals and communities of eating?  Add recipes if you got ’em. 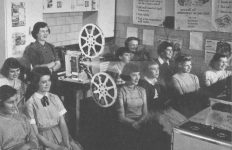