How we feeling today, Solutors? Feeling sexy? There are people to help coordinate. Feeling cautiously optimistic? We have some actors that will back you up. Feeling super optimistic? Celebrate it with Amy Heckerling. Feeling like shit? Ingmar Bergman’s got your back.

Thanks to scb0212 for contributing to this week’s collection, may his mood always be positive. Send articles for consideration during the next week to ploughmanplods [at] gmail, discuss articles from last week below, and Have a Happy Friday.

At Esquire‘s Adrienne Westenfeld interviews Ita O’Brien, a pioneer in the emerging profession of intimacy coordinators about her work coordinating and choreographing sex scenes for movies and television:

There’s some irony in people comparing intimacy coordinators to stunt coordinators. I’d say, “I need time to rehearse,” and then I’d see a note in the rehearsal schedule about a stunt rehearsal. I’d say, “That’s what I need.” They would never talk about a stunt and say, “We’ll give you the swords, we’ll put you in front of the camera, and you’ll just get on with it.” Everybody knows that’s ridiculous, but that’s the equivalent of what’s happening with intimate content.

Over the ensuing years, Troi and Crusher would slowly get more screen time, as their characters became more nuanced, but they would rarely get the chance to break out of their nurturer molds. And with Crosby gone, security chief wasn’t the only position that needed filling. “I was never supposed to be the chick on the show, the va-va-voom. That was supposed to be Denise,” Sirtis told us. For as progressive as Star Trek tried to be with its women, every show has something in common: There has to be a hot chick.

At the AV Club Katie Rife interviews Amy Heckerling on Clueless, and specifically the thoughts and influences on the optimism of its main character, Cher:

What I really wanted to write was a character who would be just completely optimistic, who would never think that anybody didn’t like her, or that things wouldn’t turn out. And that just blows my mind. Rich or poor, there are people that have that optimism, and I don’t understand it. So I wanted to deal with that.

Rain Valdez opines for Variety that it’s not too late for Hollywood to update their spotty legacy with trans characters:

An industry person once told me that the negative depiction of trans people in Hollywood “wasn’t malicious.” While there are times when the intent is not malicious, the consequences are the same. Transphobia can and does exist in the unconscious, which Hollywood helps inform. This unconsciousness is what’s killing transgender people at an alarming rate.

And finally, at Vulture Rachael Handler recommends Ingmar Bergman movies to fit any mood during quarantine:

Viewed during one of the worst moments in our recent collective global history, Bergman’s movies no longer offer a sort of sadomasochistic escape from dull banality, or an opportunity to feel like a bravely ascetic Swede. In many ways, they now reflect everyday life. Almost every single one of Bergman’s movies features the following: two to four people trapped together in a living situation that is less than ideal; a person who is mysteriously ill and convalescing for a lengthy period of time; a conversation about the absence or death of God; a woman named Karin (this isn’t relevant to quarantine, I just want to point out that there are a bizarre number of women named Karin in his movies); someone descending uncontrollably down the ladder rungs of their own crumbling psyche; vague or explicit notions of incest; musings on the futility of art; physical manifestations of loneliness; endless meditations on death; and people staying up all night saying absolutely wild shit to each other. 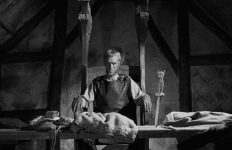