Browse: Home / THE SAMURAI TRILOGY: How To Develop A Character Over Multiple Movies

What makes a good trilogy?  A continuous story?  Escalating quality?  Lightsabers?  All of those things?  Maybe.  But at the risk of detail, I’m going to look primarily at what makes the Samurai Trilogy a good trilogy, not what makes each movie a good movie.  And I’ll go ahead and spoil that – I think it’s a great trilogy.

One thing any first time viewer will notice is that A LOT happens in these movies.  In Musashi Miyamoto, the first entry in the series, the first twenty minutes cover a period of time and story that could be an entire movie on their own.  Takezo (who will be Musashi) and Matahachi go off to war, leaving behind Matahachi’s fiance.  The war doesn’t go so well, so Takezo and friend hightail it out of there and wind up on a farm with a lonely widow and her daughter, hiding out as fugitives.  Their stay there is very extended, and both mother and daughter fall in love with Takezo, who rebuffs them, which invites their scorn.  They accuse him of assault so he’s on the road again, now no friends and no home.

This is like 20, maybe 30, minutes of the first movie.  But the movie isn’t called Takezo, and the it’s not called the Fugitive Trilogy, so next we’re on to the real story – how a fugitive goes from cowardly deserter to most famous warrior in Japan.  How does that happen?  Well, it’s not going to happen overnight.  Through the course of the rest of Part 1, Otsu (Matahachi’s fiance) learns the truth about her fiance and falls in love with Takezo, Takezo runs from everyone (because everyone wants to capture him), and a Buddhist priest locks him in an attic for three years.

I’ll spare you my limited and bad retellings of parts 2 and 3, but here’s one of the things that makes this series so great – Part 2 doesn’t rehash anything from Part 1.  I don’t mean rehash in an Evil Dead 2 sense, what I mean is that the emotional progress (forwards or backwards) made by the characters in Part 1 still stands at the beginning of Part 2, and the same for Part 3.  The primary focus of the series is how Takezo becomes not only a powerful warrior but a man, and Part 1 is concerned with the first part of that journey – rehabilitation.  Takezo will never be great as Takezo, but with help he can become the man he needs to be, Musashi Miyamoto.

There are also other stories going on.  The most significant is the relationship between Otsu and Musashi, which is a roller coaster to put it lightly.  Even in the first movie it’s clear in the early scenes that there is something between them, however unspoken, so it’s no surprise when she declares her feelings for him.  Mifune is powerful enough of an actor to refuse those advances externally but still suggest the internal struggle with his heart and his mind.  In Part 2, Musashi is too focused on sword-fighting and being the best fencer to concern himself with matters such as love, which brings me to what I believe is the theme of Part 2 – balance.  Musashi, now legendary enough to attract enemies he’s never even met and proud enough to make enemies out of potential allies, is more concerned with the sword than any other aspect of life.  He tells Otsu he cannot be with her because his heart belongs to the sword.

The “Duel at Ichijoji Temple” is appropriately epic, as is any time Mifune wields a katana, but it’s clear that Lucas was paying attention (and Inagaki was paying attention to his contemporary, Kurosawa) – the fight isn’t just spectacle.  It’s got an emotional and thematic charge that sums up chapter 2 of the story nicely.  Musashi “wins,” but it is nearly a Pyrrhic victory, and only thanks to Otsu does he recover.  Musashi has learned that a life devoted solely to the sword will likely end at the edge of a sword.

The other major story is the one that comes to a head in Part 3, the story of Sasaki Kojiro, a powerful rival of Musashi’s who wants a duel to the death.  Kojiro is the template for half of the villains in the MGS series of videogames – he doesn’t want to kill the hero, he simply wants to fight someone his equal or greater, and naturally if he meets either of those then both men cannot walk away alive.  Realizing in Part 3 that he cannot put it off forever, Musashi puts off the fight with Kojiro for a year.

During this year he all but renounces his former life as a swordsman.  He moves to a small village where he hopes he will no longer be bothered by would-be opponents, lords who want his services, or students who want his teachings.  Also implied is that he’s running from Otsu, but it isn’t long before all the women in his life catch up with him, as Otsu and the farmer’s daughter both wind up in the village.  This is uncomfortable to say the least.  Long story short, Musashi reenacts the Seven Samurai by himself and saves the village from attack.  Only after this does he realize what needs to be done and this is where I awkwardly insert the theme of Part 3 – acceptance.  Of what?  Of who he is, in every sense of the word.  He has to accept that he is a fugitive, a warrior, a wise teacher, a rapscallion, a loved man, a hated man, Takezo, Musashi.  There is no denying any part of that picture because he is incomplete without any one part, and no matter how hard he tries he can never run from a part of himself.  To deny anything would make him incomplete.  So its natural that the ending of this movie combines the two most significant threads – a duel and an “I love you.”

And when I say “the end” I do mean the end.  The last five minutes of the movie are Musashi accepting Otsu’s love and then going off and killing Kojiro (spoiler).  And after he kills him, it’s over.  They duel on a beach on an island and then Musashi’s journey is complete.  He is at peace with who he is and his life will go on.

But let me end on this note – that duel on the beach is AMAZING!!!!  If for no other reason, watch all three movies just so you can see that duel in context.  It rocks.

Author’s Note: This essay was originally written for LET’S DISSOLVE THE CRITERION COLLECTION over at The Dissolve. 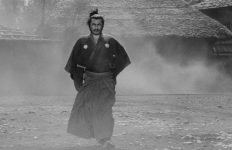 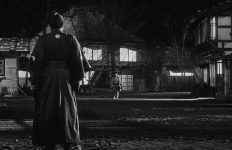 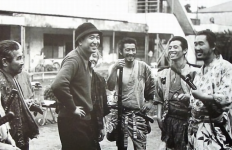 Year of the Month: Persia on Seven Samurai→ 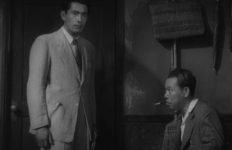 YEAR OF THE MONTH: Jake Gittes on Stray Dog→