Browse: Home / Who Do They Think Is Watching This?

So there we were, me and my friends Moses and Heather. It was Oscarpalooza, so it would’ve been early 2009. The middle of the day. As I recall neither Moses nor I were employed, and Heather had the afternoon off, and we were going to go see Frost/Nixon. Something we were all quite looking forward to but which few of our friends our own age were interested in. As evidenced by the fact that there were about a dozen people in the theatre when we got there, and the three of us might have managed to bring the average age in that room down to, I don’t know, sixty. The trailers started, and one of them was for the Wayans Brothers movie Dance Flick.

Now, this is not intended to shame you if you indeed had an interest in that movie. But my friends and I were probably the closest in the room to its target demographic—as in, we were young enough to have ever watched In Living Color, for starters, which was aimed at perhaps the age group these people had been in when Saturday Night Live first aired. And even we didn’t want to see it, as we share strong feelings on how to make a good parody that I should write about at some point but that the movie didn’t seem inclined to follow. So I asked my friend what seems to be an inevitable question in this situation—namely, “Who do they think is watching this movie?”

Oh, sometimes, it’s quite clear that the people in charge of trailers have a good grasp on their target audience. Action movie trailers before action movies. Not just superhero movies before superhero movies but also science fiction or fantasy or, yes, animation. The Olympia Film Society tends to just, you know, actually have the trailers for whatever movies are on their schedule in coming weeks. But routinely, what you get is a trailer that has you looking at your ticket to make sure you bought the right one, because surely no one would expect an overlap in viewership enough to make that a sensible decision.

And, yes, people like more than one kind of movie. However, with the industry being as aimed at specific populations as it is, you’d think they’d be more careful with the trailers. I suppose it’s possible that one of the old people in that audience saw a movie aimed at people a third or less their age and thought, “Yeah, that looks fun!” Didn’t seem to be what was happening, but I’m sure it did somewhere. It might’ve pegged someone’s sense of the absurd, I guess. But relying on that one person seems a waste of the trailer.

I’m sure we all have a story like that. Heck, I would have been just as surprised to see a trailer for Frost/Nixon before Iron Man or The Dark Knight—and those are both movies I saw that year and really liked. In different ways than I liked Frost/Nixon, granted, but still. Every once in a while, you are left asking yourself that very basic question.

Ask yourself if you think you should maybe consider supporting my Patreon or Ko-fi! 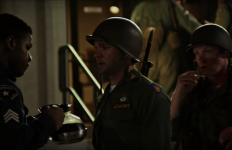 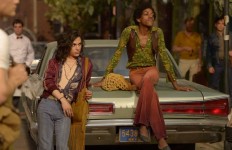