So my kid was watching some show or another (not one I’m familiar with) where an elk calf was trapped in a cave or something, and it was because of earthquakes, and the earthquakes turned out to be caused by fracking. Which, you know, well on you Nick Jr. for teaching my six-year-old about fracking, I guess, but there’s another problem, here. Which is that, after watching a couple of episodes of the show, it became clear that the villain is the same guy in every episode, and he’s always one guy who just puts his love of money over concern for the environment. Which is, you know, definitely a thing that people do, but he couldn’t sell all that oil he’s selling if it weren’t for people willing to buy it.

I don’t remember what movie it was, but my partner was watching a movie years ago where the villain literally turned a switch from “good” to “evil,” to make the rest of a country evil like she was. And, um, that is just really not how people work. The most destructive thing the world has is not Captain Planet villains who destroy the environment for funsies. It’s ordinary people doing what they think is okay but turns out to really not be. And I know that’s harder to make a cartoon about, but the problem is that a lot of people don’t progress in their view of evil past that point.

Don’t get me wrong; I also agree that there’s too much emphasis put on individuals’ possible actions to fix the environment when it’s corporations—and governments—that do considerably more harm. The fact that I used a single plastic straw last week is not worse than the oil company lobbyists persuading the government not to buy into renewable energy sources, you know? But when kids a bit younger than I was saw a Sting-voiced alien try to destroy the planet by giving the Planeteers iron fists (see also: hell of a drug, cocaine), that sort of thing made it a little easier for us to say, “Sure, but I’m not really doing bad things to the environment, because I’m not Looten Plunder [voiced by James Coburn for twelve episodes].”

I’m also not a big fan of the idea that we should keep making prequels that show villains’ motivations; sometimes, it’s okay to just let the characters be evil. But scarier than most evil characters are those people who really think they’re doing the right thing. Because that’s most evil people, honestly. The Big Evil Switch wouldn’t appeal to most villains trying to change how the world works—and if it did, it would be because they already thought it was flipped the wrong way. Most of the movements in world history that are generally agreed to be evil were started by people trying to fix what they thought of as an evil world.

And even those nasty, toxic corporations aren’t completely staffed with sociopaths; there just aren’t that many sociopaths in the world. Yes, corporations pollute because they put profit ahead of the environment, and there’s certainly an argument that it’s an evil action. I don’t even disagree with that argument. But I seem to remember Hoggish Greedly (Ed Asner!) just kind of dumping toxic waste for kicks, and on the cartoon my kid has been watching, the villain is partly just too dumb to realize that, yes, earthquakes are bad. And the earthquake only affects a single elk and her calf, so it’s not even as bad as the real people behind fracking, who are endangering quite a lot more than that.

Also . . . the solution on the show my kid was watching (I genuinely didn’t notice what it was called) was just building a windmill instead, and wow, that’s an oversimplification, too. Because oil and wind power are energy sources used in primarily different ways—you can’t run a car with a windmill unless you first install the technology to make an electric car, for example, and you certainly can’t lubricate a car with wind power. So it oversimplifies both the problem and the solution, and I get why a cartoon that a six-year-old likes that, but it feels as though the oversimplification never ends.

Microtransactions are the solution The Solute has arrived at for paying its writers; be part of that by contributing to my Patreon or Ko-fi!

Know Your Evil: The Vimes/Dortmunder/Mackey Axis (by Miller)→ 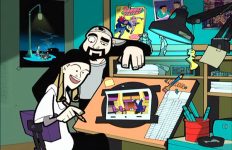 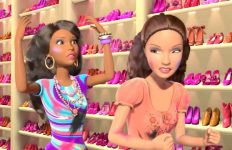 BARBIE: LIFE IN THE DREAMHOUSE→