Noel Murray on Lady Bird for The Week:

“So far in her career as a screenwriter — including with Lady Bird — Gerwig has worked in sketches and vignettes, assembling short scenes and interactions into something less like a “story” than a “life.” There are multiple narrative threads in Lady Bird, followed in a scattered fashion. The movie bounces between the heroine’s fumbling sexual explorations, her sometimes-strained relationship with her sweeter-natured best friend Julie (Beanie Feldstein), her seemingly quixotic quest to get into a college in New York City, and her epic fights with her mother Marion (Laurie Metcalf).”

Sam Adams on Coco for Slate:

“In Pixar’s Coco, a young Mexican boy named Miguel visits the spirits of his ancestors in the Land of the Dead, where he’s gone to escape his parents’ refusal to let him pursue his dream of being a musician. Watching Coco is also like traveling through a graveyard, although the phantoms that haunt it are not people but movies. With Pixar now in its third decade of feature filmmaking, it’s inevitable that patterns would become more established and new tricks turn old. But in Coco the ghosts are so transparent you can see right through them, and when the movie’s over, they evaporate altogether.”

Actually, that’s not entirely fair. Justice League does have one idea at least: that the world is a very sad place, full of not only sad people but sad meta-humans, and with great power comes overpowering despair.”

I would respect JUSTICE LEAGUE a lot more if it was called THEY ROBBED SUPERMAN'S GRAVE!

“[…][T]here’s as much a broad-strokes patriotism to Darkest Hour as there is to Dunkirk, more a distillation of a complex situation than the fullest possible examination of it.

Beyond their settings, the chief difference between two films is artillery: Darkest Hour is about the weaponization of rhetoric, with words dropping like bombs. But they’re not so easily deployed. Hidden behind resplendent latex jowls, Gary Oldman plays Churchill as a stout-hearted but deliberative man who’s willing to paddle against the political tide, but doesn’t arrive at his confidence easily.”

“[…]Oldman[…] is doing god-level work in this movie.. This sort of performance — a great man of history played beneath heavy makeup and heavier accent — has long devolved into awards season cliché. So much of this kind of role seems predicated on the idea that the best acting is actually the most acting. But as showy as that makeup and voice is, and as big and boisterous as Churchill’s speeches are, Oldman finds nuances that few actors do in this sort of role. He’s not all fiery tirades and tearful monologues.”

“But as magnetic as Oldman’s Churchill can be, the movie manages to pry itself away long enough to take in the people around him: his antagonists, Neville Chamberlain (Ronald Pickup) and Viscount Halifax (Stephen Dillane); his wife, Clementine (Kristin Scott Thomas); his secretary, Elizabeth Layton (Lily James), whose entrée into Churchill’s service is accompanied by shouting and tears; and his king, George VI (Ben Mendelsohn), a skeptic wary of Churchill’s brusque manner and bellicose aims who is eventually won over to his side.”

“Screenwriter Anthony McCarten and director Joe Wright have made a movie that people on the right or left could either embrace or find “problematic,” depending on how they read it. At this particular point in time, any film in which the main character’s so vocally anti-Nazi is bound to be raise more eyebrows than it would’ve just a few years ago, when actual Nazis seemed less close at hand. But at the same time, there are eerie resonances between Churchill’s rhetoric in this film and the words of contemporary authoritarians.”

“As the title character in Roman J. Israel, Esq., Denzel Washington does some of the most strenuous acting of his lengthy career. Superficially, Roman, a crusading attorney with a background in civil-rights activism, seems like a natural fit; indeed, Washington played a similar role two decades ago in Philadelphia. This lawyer, however, is an almost agoraphobic misfit, deeply uncomfortable around other people. That’s a huge challenge for such a relaxed, self-confident movie star. For the first time in a long while, you can really see how hard Washington is working. It’s not a terrible performance, but the sweat is visible.”

David Ehrlich on Cuba and the Cameraman for IndieWire:

“Filmmaker Jon Alpert has spent his entire adult life trying to bring those two worlds closer together, and his simple but enthralling new documentary culls from almost 50 years’ worth of footage from his trips to the land of Fidel. Alpert has two Oscars to his name (both for Best Documentary Short), but most of his work in Cuba has been for archival purposes, and so “Cuba and the Cameraman,” while essentially a greatest hits collection for Alpert’s career, never feels recycled. It also never feels Frankensteined together.”

“It’s even possible to share Neal’s initial disdain for John Candy’s aggressively upbeat shower-ring salesman Del Griffith, who unwittingly trips him up right at the start of his journey. As much of an over-sharer as Del turns out to be, though, he’s also a good man to have in your corner when the chips are down, a point of view Neal is slow to come around to. No matter what fate throws at them — and Hughes makes sure fate has a lot of ammo — Del has a fix for both of them that works out better than what Neal comes up with on his own.”

Nathan Rabin on Cobra (1986) for Cannonvember:

“With Cobra, Stallone tried to out-Chuck Cannon’s two Chucks (Chuck Norris and Charles Bronson) by making a right-wing bloodbath even more ridiculously over the top in its depiction of criminals not as human beings who choose to commit crimes for any number of reasons, many of them steeped in complicated socio-economic and political factors, but rather as crazy-eyed, knife-wielding sub-human garbage just begging to be set on fire or riddled with bullet holes.”

“Veteran filmmaker James Ivory is happy to let “Call Me by Your Name” rest now.

[…]Ivory has no interest in returning to the material. For him, this chapter of his creative life is closed.

“That’s the first I’m hearing about that,” Ivory said when asked about sequels. “If he wants to do something, if Andre Aicman wants to write something, that’s fine, good. But I don’t know how they’re going to get a 40-year-old Timmy!”

That would be Timothée Chalamet, the breakout heartthrob at the center of the acclaimed movie.”

Tasha Robinson interviews Lee Unkrich on Coco for The Verge:

“You called it “fear-based filmmaking,” because you worked so hard out of fear of letting people down. Did you go through anything similar here?

I did, but in a different way. In that case, I was petrified of going down in film history as the guy who directed the bad sequel to the two beloved Toy Story films. That was a lot of what drove me on that film. In this case, I did have a lot of anxiety when we were making this film about the fact that we were taking on a real culture in the world, and the fact that I’m not Mexican or Latino myself.”

Noel Murray interviews Michael Stuhlbarg on Call Me by Your Name for Uproxx:

“What’d you learn, what was the most interesting thing you learned preparing for this?

I think part of Professor Perlman’s passion for what he did rubbed off me in the sense that it made me remember that all these artifacts, and all these pieces of things… his passion for it reminded me that these were human beings. These are old stories, these were people who were walking the Earth like us, just a number of years ago, who had love, who had passions, who had friendships, who created art in some instances to celebrate their lovers or their loved ones.”

Kate Erbland on how “Lena Dunham Uses Feminism to Market, Not to Lead, and Apologies Don’t Fix That” for IndieWire:

“The “Girls” co-creator and “Tiny Furniture” filmmaker has doled out multiple public atonements over the last decade, with verbal missteps ranging from wishing she’d had an abortion to comparing Jezebel to an abusive husband. Her most recent attempt to make amends arrives at a critical point in Hollywood history and modern feminism, and it’s time to recognize that her political stances are not misguided, or even inconsistent: They aren’t ruled by values, but by what’s good for Dunham and her friends.”

Jen Chaney on how “Pop Culture Is Keeping [Charles Manson] Alive” for Vulture:

“We’re likely to see more of the late convicted murderer on the big screen courtesy of Quentin Tarantino’s planned movie about Manson, and a possible adaptation of that aforementioned Emma Cline novel The Girls.

[…]All of these projects were obviously in the works or completed well before Manson died. But more than anything else, this recent trend to depict Manson and his so-called family is evidence that their horrible acts have never stopped creeping their way into popular culture and probably never will.”

Genevieve Valentine on the book Frankenstein: The First Two Hundred Years for NPR:

“In some ways, Frayling’s done his job too well; there’s so much detail and care in the early research that the film section feels slightly perfunctory by comparison. (This is a book that assumes you know more about Hammer Horror than Geneva’s touring schedules in 1816, which … is fair.) Still, part of the magic of movies is that Boris Karloff’s face speaks for itself, and there are plenty of more obscure artifacts to illuminate the development of a story that became part of the public imagination.”

“Fair warning: this is a no-holds-barred, all-spoilers-allowed conversation.

[…]Bryan: […]How did you feel about the movie’s handling of the Man of Steel?

Tasha: Least favorite thing about a movie I otherwise largely enjoyed. I think there’s an interesting, painful emotional resonance in “The world cannot survive without a Superman” themes, because we the audience have to survive in a world without a Superman. (Granted, we’re not dealing with periodic alien invasion.) But you’re right, this feels like the movie wants to address the impact of Superman’s death, and it doesn’t get very deeply into it.”

Charles Bramesco on “Everything We Definitely Know About The Room’s Tommy Wiseau” for Vulture:

“Sestero learns from his brother’s girlfriend that Wiseau was born in the 1950s, which Rick Harper then refined in a recent sit-down with The Hollywood Reporter as 1955. It makes a twisted half-sense that Tommy would be so bizarrely defensive about his year of birth. The Disaster Artist describes Wiseau as having an intensive self-care routine, from regularly dyeing his hair to a comprehensive daily workout to keep up his hulking physique. In his own imagination, he’s a big-time Hollywood movie star, and he wouldn’t be the only one actively maintaining the outward appearance of youth.”

Nathan Rabin with Clint Worthington in Episode 2 of Nathan Rabin’s Happy Cast — the minutes are: 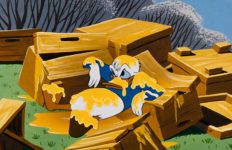