Browse: Home / Film on the Internet: EVENT HORIZON on Netflix

If Hellraiser codified the goth bondage fantasia, Event Horizon is the end result of the dark industrial genre as it appeared in the 1990s. After Hellraiser was released in 1988, industrial bands obsessed over the blacker than black, spikes and straps, chrome and leather look that was as kinky as it was punky. Alex Proyas polished the style in both the comic book and neo-noir genres (The Crow and Dark City, respectively). By 1997, that whole style was fading into the background as a more earnest generation took over pop culture (see: Gregg Araki’s Nowhere).

Paul W.S. Anderson made his American breakthrough with Mortal Kombat, a vapid exercise in style and commercialism. Based on the success of that video game tie in, he passed up opportunities to do Mortal Kombat: Annihilation, Alien: Resurrection, and X-Men in order to do this goth hybrid of Solaris, Hellraiser, Alien, and Sphere. Event Horizon is an argument for the idea of synthesis as a form of creativity. There is little original in Event Horizon, but the end product is so unnerving and creepy that one can easily overlook its lack of novelty.

Seven years ago, the space ship Event Horizon was sent on a deep space journey using a new experimental jump drive and disappeared from existence. Now, the long lost space ship recently reappears within range of Earth while sending a distress signal. A rescue vessel, led by Laurence Fishburne, is sent to investigate, and discover an abandoned ship where the only evidence of what happened to the crew is a spooky distorted video. People die.

The dimensional warp drive, as shown in the above photo, is a thing of gothy beauty. A giant black gyroscope with massive spikes centered inside a spherical room lined with even bigger spikes, its like Trent Reznor redesigned the space set of Lifeforce. This carried onto the plot where a malevolent force comes through in various nightmarish roles. Atmospheric and tense, Event Horizon used science fiction to dust off the demonic horror genre. 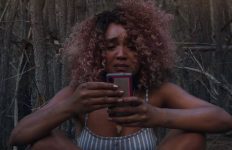