McKenzie Woodward’s Mr. Weekend is a great example of how to do stripped-down, stylish filmmaking on a budget. It was clearly made on the cheap, and you can tell it’s an early work by a writer-director still developing his chops, but if anything, that only adds to the appeal. (Even the slightly stilted acting feels like part of the charm: the energy comes through even if the refinement is lacking, and it’s almost like this kind of freshman work should feel a little raw and amateurish. You should sense that the filmmaker’s ambitions are greater than their current means.) This is lean, effective, and clever, a “noir noir,” or Black noir, made by someone who clearly knows the genre and can confidently take his own angle on it.

The movie has a lot of fun with its homage elements–the traditional voiceover, the obviously fake driving sequences–but it doesn’t lose itself in its references. There’s a satisfying plot here, and the film sticks close to it, giving up its tight focus on sub-book Charlie (Willie Wright) when it makes more sense to follow the story elsewhere. Which does happen, because a key element of the movie is the way control of events slip out of Charlie’s hands.

Right from the start, we sense that Charlie is in over his head. He’s smart, he’s funny, and he’s cool–but there’s some missing element that keeps him from being a true player in the world he moves through. He lacks, maybe, the capacity for violence. He’s too amiable. All the qualities that make him a fun guy to hang out with seem likely to doom him in the long-run. But for now, he’s coasting along, doing well enough: he’s a kind of intermediary bookie, one who sometimes gets tapped by his boss to make the rounds collecting on debts. That’s how he finds out that gun runner Hyman (Peter D. Michael)–“Want an Uzi?” Hy casually offers as a throw-in at the end of their meeting–is serenely confident that he’ll be able to pay off his $67k debt tomorrow, “with interest.” Hy has lucked into several pounds of crystal LSD, a nice change from the usual cinematic drug scores. It’s worth millions–enough that Charlie correctly identifies it as “kill-people money.”

And, sure enough, someone goes after it, torturing Hy for the location. They mess up, and he dies before he can tell them anything. Charlie stumbles in on the aftermath, and, already knowing where the LSD is, impulsively walks out with it.

Bad idea. He has connections enough to test the quality and find out how he can sell it, and he’s sharp enough and good enough on his feet that he can get out of Hyman’s building carrying a cooler full of LSD right past the people who are looking for it, but he’s too trusting and too romantic. He talks to too many people. He wants his regular sex worker, the charismatic and capable Nora (Janelle Marie), to run away with him. Everything keeps getting bigger and more complicated: the guy he has test the LSD resells some on his own, confusing the buyers Charlie has lined up; Charlie’s boss is still demanding payment on Hyman’s debt, which means Nora has to clean out her rainy day savings, which means she has to lie to her actual boyfriend and destroy their shared future; the guys who killed Hyman are still looking for their windfall. It’s just the right amount of busy–it feels naturalistic rather than over-plotted. And while it goes more or less where you’d expect, the middle-game complications are pretty damn good, and the execution of the ending is solid (with some especially good acting from Marie).

The film also looks good, in sharp black-and-white with nice pops of hot pink in the credits and an unworldly, <i>Pulp Fiction/Kiss Me Deadly</i> glow to the LSD crystals. The dialogue is sharp and stylized, a good continuation of a grand noir tradition: “When you get caught with that, you’re doing life,” Hyman tells Charlie about the LSD. “That shit made hippies out of people. Uncle Sam won’t let that slide.” It knows when to drop the verbosity and go for simplicity, too. Nora almost snarling, “Pathetic,” at Charlie is exactly the moment it needs to be.

I’d like to see Mr. Weekend usher in a wave of noir noir, but in the meantime, it’s good to have such a crisp example of it, and I’m glad Woodward has such a nice calling card to get more work. 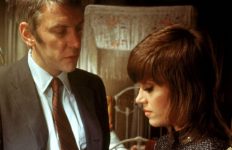 Film on the Internet: KLUTE→

Film on the Internet: THE BOOKSELLERS→ 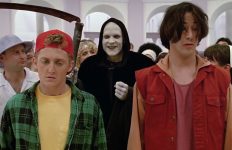 Film on the Internet: BILL AND TED’S BOGUS JOURNEY→