Each year, the Academy of Motion Picture Arts and Sciences releases a shortlist of foreign language films that are eligible for an Academy Award. For more on how the process works, click here.  In anticipation of that event, we will look at 2013’s nine shortlisted films. Go here  for previous installments. This week is Germany’s official selection, Two Lives.

Two Lives is a tense spy thriller that occurs just after the fall of the Berlin Wall in 1989. The film tells the story of Katrine, a middle-aged woman who appears to be the victim of Germany’s painful past, but–when her true self is revealed– is guilty of terrible crimes in her own right.

When Two Lives begins, Katrine (Juliane Kohler) appears to be a Norwegian resident with a painful past. As she tells it, she was born during the Nazi occupation of Germany: Her father was a German officer who was in love with a Norwegian woman (Liv Ullmann). Katrine was forcibly taken away from her mother and raised in an orphanage in Germany. In 1969, she escaped from communist East Germany and returned to Norway where she and her mother were reunited.

More than 20 years later, it appears that Katrine has built a new life. She is happily married to a dashing submarine captain (Sven Nordin) and has a beautiful daughter (Julia Bache-Wiig) and granddaughter. Katrine is devoted to her mother, who frequently visits Katrine and her family in their cozy  lakeside home.

However, things aren’t exactly as they seem. A human rights lawyer (Ken Duken) who is assigned to Katrine’s case begins digging and he comes to believe that Katrine is a double agent for the Stasi, the notorious East German secret police. Katrine’s domestic bliss begins to unravel as she is caught in a web of lies and intrigue.

Two Lives is based on historical events. Many children of German officers and Norwegian mothers were forcibly taken to Germany by the Nazis so they could be raised as “pure Aryans.” Some were adopted by German families while others were raised in orphanages. Many of these children were recruited by the Stasi to spy in Western countries. The film’s epilogue states that some of these Stasi agents may be living in Norway, still undercover after all these years.

Director Georg Maas directs Two Lives as part Cold War thriller, part domestic melodrama. I’ll admit I’m a sucker for a spy movie and this film’s many twists and turns kept me on the edge of my seat until the final scene. Two Lives is also well-acted, especially by Kohler, who never hits a false note in a demanding role that requires her to be both a sympathetic victim and a cold-hearted monster. The legendary Ullmann gives a masterfully understated performance as Katrine’ s mother, a simple, gentle woman whose life has been torn apart by Europe’s tumultuous history. The bewilderment and sadness on Ullmann’ s face when she realizes that her beloved child may not be who she seems to be is truly heartbreaking. I’m not usually a big movie cryer, but Ullmann’s final scene made me shed a few tears.

Two Lives is a good film, but it does have its flaws. The plot becomes increasingly implausible as the movie progresses. It’s difficult for me to believe that someone could live a double life for more than 20 years in a small village without anyone noticing, especially when at one point Stasi agents are running around the village in broad daylight with their guns drawn.

Grade: B minus. Two Lives has its flaws, but overall it’s an absorbing thriller about little known historical events.

Next week I’ll look at The Grandmaster from Hong Kong.

The Academy and Mr. Spielberg→ 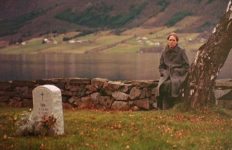