One argument I would like to make in this series on women in 70s U.S. films is that films can be interpreted as feminist by showing women acting honestly, rather than doing what they should do. In doing so, the issue shifts from morality (good/bad) to the more complex ethical question of how women survive in an environment with limited options.

Like the film covered last week, Diary of a Mad Housewife (1970), the film I will now discuss is out of print (although available on Netflix). While it won the Critics’ Prize at the Venice Film Festival in 1970, its uncompromising portrayal of a woman socially adrift does not make for an emotionally easy viewing experience.

A Different Kind of Outlaw: Wanda

In a scene that sets the film’s bleakly humorous tone, Wanda Goronski, abandoned and alone, falls asleep in a film theater while watching a guy on screen sing “Ave Maria.” When she wakes up she finds that all of her money has been stolen. So much for salvation, the film suggests.

Daring to be a downer for much of its running time, the film confused Pauline Kael, whose review questioned why no reason was given for Wanda’s appearing miserable. But I don’t think the reason is that hard to grasp—even if we can’t see it directly. What doesn’t exist, can’t be shown. Wanda’s emotional state is defined by absence: what isn’t there.

Although Wanda doesn’t really fit in, appearing earlier in a long shot as if she floats, a spectral figure dressed in white, across the darkened coalfields of Pennsylvania, the film questions the idea that she is a victim, even if she is rather passive. At the start of the film, she raises little protest when she is informed she is no longer needed as a worker in a textile mill, she finds out she has received less money for her work than she thought she earned, and, in divorce proceedings, she loses custody of her children. Played by Barbara Loden, Wanda retains the appearance of a housewife (such as wearing curlers) even after such an identity has ceased to be of any use to her.

Her indifference flies in the face of a long American tradition (going all the way back to Benjamin Franklin) of being a self-made individual. The hostile response she evokes from Dennis, an irritable, small-time criminal, echoes how perhaps most viewers would regard her. Dennis says to Wanda, “If you don’t want anything you won’t have anything, and if you don’t have anything, you’re as good as dead.” 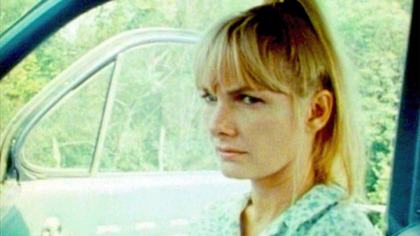 But if you have no money, no power, what’s the point in wanting anything? She remains silent, however, as she maintains a defensive posture and looks away from Dennis, off to the distance. Above her, the sky is open, but growing dark: reminding us of the fading possibilities for Wanda and Dennis as they sit on the hood of a stolen car.

They first meet when Wanda leaves the theater and goes to a bar that is being robbed by Dennis. She becomes his accomplice (she affectionately calls him Mr. Dennis), despite his initial dislike of her. They hit the road, on route to a bigger job, a bank holdup.

She does not seem to change at all, acting as if she is just along for the ride. We hear her tell Dennis that she’s “no good,” after he asks her if she’s married, and she alludes to her divorce. There is no measure of defiance in her words, only, once again, resignation. She thinks she’s no good, because that’s what she’s been told. Wanda is an outlaw because she is an outcast, hardly a badge of honor. After all, few would choose to be an outcast.

This is, to a large degree, what makes Wanda and Dennis similar. Before doing the bank job, Dennis visits his father, who resides at a religious theme park. The setting puts an ironic spin on the idea that spirituality opposes materialism. His father rejects him, refusing his offer of money, because it is stolen. Religious values reinforce social labels of what/who is “bad” and “good.” While Dennis is unable to reconcile with his father, Wanda walks through the catacombs, the resting place of martyrs. She is, of course, not one of them. 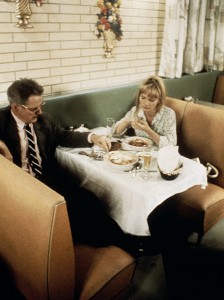 Later 70s films would give us greater license to revel in the decadent glamour of an unjust world—even though, as Francis Ford Coppola famously claimed about The Godfather series, they would at times be critical of the capitalist ideology that brought this world into being. But Wanda is far more cynical, denying us the pleasure of watching outdated moral barriers fall. Instead, it points out that the real obstacles we face are economic and much more difficult to transcend through individual acts of rebellion (including crime) than we would like to imagine.

Throughout Dennis has been ordering Wanda around; he takes on the dominant role in the relationship without a second thought, reproducing the sense of confinement she felt at the beginning of the film. As they rehearse for the robbery, Dennis gives her a script of what to say. She looks reluctant. In a charged moment, he says to her, “Maybe you never did anything before . . . but you’re gonna do this,” as if by sheer force of will he can transform her.

The heist is doomed from the start. Dennis, in the bank, orders the vault opened, triggering a silent alarm that alerts the police. Driving the getaway car, Wanda arrives a few minutes later as Dennis tries to escape and is shot. Wanda is blocked by the police from the crime scene.

Watching television in a bar, Wanda hears, in a news report, that Dennis has died. A guy she has just met sits across the table from her, plying her with drinks. She is then sexually assaulted by the same guy in a car outside, but she manages to get away. In the last scene, she is at another bar. More drinks are bought for her. The more drunk she gets, the more resigned she looks. In the front of the bar a bluegrass band is playing, perhaps an allusion to Bonnie and Clyde (1967); the acts of violence were accompanied by similar music on the soundtrack. But the differences between the fates of the outlaws in the two films are clear. No one will remember Dennis; Wanda does not go out in a blaze of glory.

Nor does Wanda fit the category of anti-hero: what often elevated those—and made them look romantically attractive—who were victims of injustice in 70s films. The film proposes that the violence done to Wanda barely registers; she has a social invisibility no matter how she acts. A film so stripped down emotionally and conceptually could not help but question the over-dramatization of the struggles of women to survive in a social environment that marginalizes them—it might look good on film, but becomes one more illusion in a world that has a few too many already. 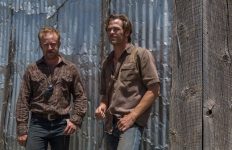 HELL OR HIGH WATER Is Both a History and Acting Lesson→ 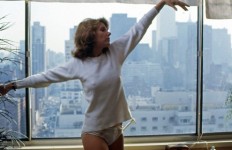 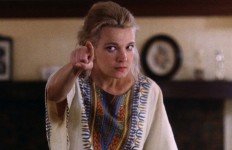