The passion play is as old as time. Christians around the world have been re-enacting the crucifixion of Christ as displays of reverence toward the catalytic event of Chritianity. These re-enactments evoke extreme emotions of sympathy and empathy leading to reverence and devotion, spreading the message of Christ and picking up new recruits. The passion play would become less brutal and/or less popular over time, but it never fully disappeared from Christianity. It had a resurgence in the early 1900s, but faded again. In 2004, Mel Gibson released the torture porn The Passion of the Christ, depicting Christ being graphically tortured and killed…and little else.

Eventually, the temptations of fiction would cause Christians to try recruitment through the appropriation of soap operas and tragedies. These would become increasingly dramatic as real life news reports became more and more yellow (read: fear based). The increased brutality of the news led to the increased brutality of all other media (see the afore-mentioned The Passion of the Christ), and Christians would look to new ways to invoke strong reverence in new recruits.

At some point in the 1980s, Christians noted the strong emotions evoked by the haunted houses. Realizing that non-Christians mainly come to Christ through strong emotions, especially fear, some churches decided to do their own twist on the haunted house. The churches wanted to create haunted houses that were intended to recruit people to their church through fear. They realized that modern news was horrific enough to evoke fear, and that haunted houses are meant to evoke fear. Putting 2 and 2 together, the churches realized that they could recruit through these two large sources of fear and redemption.

Thus was born the hell house. A hell house is a haunted house run by a Christian church that uses real life scenarios to freak the shit out of people, tell them they were going to hell, and intimidate them into redeeming themselves by throwing themselves at Christianity. Naked emotional manipulation is the church’s intent.

Hell House is about one particular hell house in Texas run by the Cedar Hill Trinity Church. Director George Ratliff focuses the film on the constituents of the church and on the process of building the hell house. His follows the creation from the brain storming sessions all the way through the build and auditions to the opening of the hell house. The final act of the film shows people going through the hell house, and the emotional effects that it has on the visitors. As the coda of the film, Hell House informs us that the christian churches say that hell houses recieve 75,— visitors nationwide, and that they score about 15,000 new recruits every year. As you watch the movie, you should remember that these hell houses have a 1 in 5 success rate of recruiting members to church.

One personal story is a single father with FOUR children ranging from teenage to infant. The infant has epilepsy. This isn’t a rich family. The mother had found a new lover over the internet and abandoned the family for this new lover. The father and family are still devastated. Ratliff shows us that the Church is seemingly the only stable thing this man has left. His children are either growing up too fast or having seizures. The father’s economic situation isn’t strong. He seems whelmed by life. But, he still has his church.

That’s not to say that everybody is as sympathetic. At one point, some of the church employees/volunteers are writing dialogue for Satan about his recruitment of a teenager. In the dialogue, Satan says that he started recruitment early through Harry Potter novels and then the outcast turned to role-playing games and Magic: The Gathering. The authors barely even know what M:TG is, having the vague notion that this is an existing game that deals with fantasy and possibly occutltish tendencies. This particular hell house story used to be about school bullying and had ended in a school shooting (which brought the church news when it performed the scene in 1999 after Columbine). Due to the then-changing atmosphere of school shootings, however, Cedar Hill decided that it would be better if the bullying and occult scene ended with a Jeremy-style suicide in front of his bullying classmates. 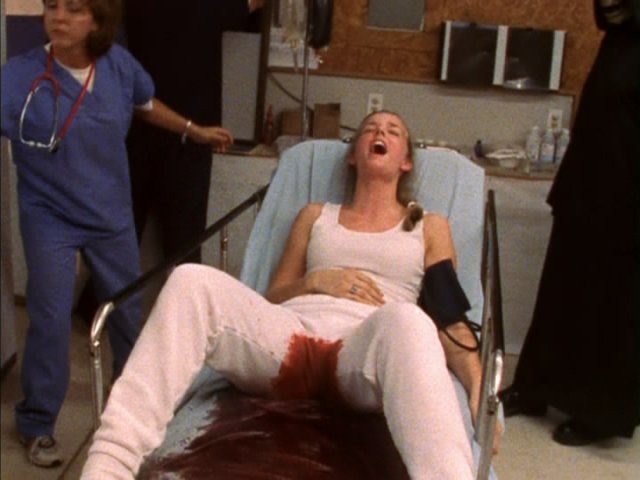 At another point, one of the key members is commenting on how he used to be deep in the rave scene. He comments that there would be dozens of deaths at a rave. Then, admits he’s exaggerating, and maybe only 5-10 dead kids at a rave. Then, he makes the adjustment that he’s only talking about the most dangerous extreme ones…like the ones that are local to his town! Meanwhile, he and the authors are writing in a drug scene involving the date rape drug (though nobody knows the official name of the drug), which would lead to a rape scene which leads to a pregnancy, which leads to the use of then-hot-target RU486 day-after pill…leading to the image of a teenager with a hemorrhaging uterus who gets visited by Death. The author of this scene is the same guy who decorates his rave set by spray painting his own monikers on the wall as well as Acid Burn (the user name from a character in Hackers, he enthusiastically explains). The set decorators also intend to use the 5-pointed pentagram, but wind up using the 6-pointed Star of David.

Even the single father’s story comes to be mined for the hell house. He has the writers come up with a domestic violence scene where the wife is having an internet affair, and is about to leave the family before she gets beat up and murdered by the husband. The father seems to have a look of delicious salvation on his face when he’s watching this, as if he’s imagining this is true retribution for his suffering. If only he had been more of a thug.

The final story used in the hell house is about a gay dude who caught AIDS. In the hospital, he curses God for giving him AIDS. While he curses God on his hospital death bed, his roommate is the raver/abortion girl who renounces her ways, finds God on her death bed, and gets saved and redeemed to heaven.

Through these stories, we come to the realization that these people aren’t just using fear to recruit people. These people are frightened themselves. They are frightened by rape, by drugs, by games, by the occult, by books, by dance music, by bullying, by the internet, by by by… Basically, the whole world seems to make them afraid.

To be completely fair, some of them, as with the single father, have real reasons to be pissed and/or afraid of the outside world. One hell house actress comments that she was raped at a young age. She saw her rapist in the crowd one year, and she was able to forgive him for his transgressions for the first time, giving her a little hint of closure. On the other hand, many other youth seem to be extremely devout and judgmental merely in order to rise in the order of the church and in order to not burn in hell.

Some of these other youth are ridiculously devout. One of the best moments of the film comes when they’re posting the cast notices. Many of the girls are hoping for the coveted role of “abortion girl.” The girl who scores the role is overjoyed. Her joy at playing the “abortion girl” is not without reason. The juicier roles are given based partially on acting talent, but primarily based on devotion to the church, creating an in-church social hierarchy. If you’re not devoted enough to church, you don’t get the part of the redeemed abortion girl. Or, for that matter, the hellbound homosexual.

As mentioned earlier, the hell house has a 20% success rate of recruitment. The hell house gives a guided tour of these mini horror scenes in groups. At the end of this house of horrors, a dude lords over the group in a dark room. He tells the now-emotionally-distraught group that they can be redeemed by entering this open room with the white light where there are people there to pray with them. But, this is a limited time offer. The audience only has until the count of 5 before the door closes. Fooooourrrr. Are you sure you want to go to hell? Threeeeee…. As such, the temptations of Christ are treated as just as exclusive and desirable as the temptations of Satan.

There is one knockout scene that all viewers will remember from Hell House. It’s either a “The kids are alright” scene or a “The kids all going to hell” scene, depending on your point of view. In the waiting area after going through the hell house, we are shown a group of “disaffected” goths who have been disturbed by the messages of this hell house. One is a teen guy in a Fear Factory t-shirt who is screaming about how unfair and biased and homophobic all of that was, and what the hell were they trying to do? It offended him deeply. As he rails on, Hell House points out that all this use of fear not only recruits but also polarizes the situation. There is no grey area between Christianity and hell.

Part of the deal George Ratliff struck with the church to make the documentary was that he couldn’t spin the events in the film. He had to present it as it was. He succeeded, and it’s frightening. There is no overarching narration. There is no pointed “this is bad” style commentary. Ratliff instead uses the editing process to show how the church is functioning to play off the emotions of the followers, and uses fear and intimidation to keep its followers in line. But, because he only uses the editing to make this commentary, one could read this as a horror movie where the Christians are the bad guys, or one could read it as a hopeful group of ragtag devouts who are simply trying to save their souls.

In either case, this is one of the best documentaries about modern evangelical Christianity. It allows the Christians to have their own mouthpieces without passing overt judgement. The Christians are hoisting themselves by their own petards, so to speak. Everything uttered is in their words. Nobody crammed the material into their mouth. This duality makes Hell House essential viewing for Christians and non-Christians alike. 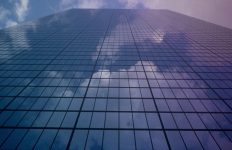 Year of the Month: KOYAANISQATSI→ 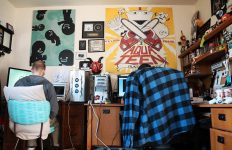 Film on the Internet: INDIE GAME→