Browse: Home / Now she’s gone, and I’m back on the beat: Squeeze, SINGLES 45s AND UNDER

This one is short– greatest hits albums don’t lend themselves to deep thematic analysis. I just wanted to review a band I really like and find underappreciated.

If, like many Americans, you only know Squeeze from “Tempted,” you’re really missing out. The best band named after the worst Velvet Underground album were pop masters in their heyday. Singles 45s and Under, a greatest-hits collection from Squeeze’s early period (1978-82), collects much of the best of that heyday. (The title is a pretty clever pun about singles bars, a fitting subject for a band that so often wrote about lovelorn drinkers.)

Like so many great pop-rock bands– from the Beatles to Big Star (last year’s Year of the Month subject!) to Fountains of Wayne– Squeeze were anchored by a potent songwriting duo, in this case Chris Difford and Glenn Tillbrook. Founding the band together in 1974, Difford generally wrote the lyrics and Tillbrook the music; both took turns on vocals, though Tillbrook was most commonly the lead on singles. Naturally, such a duo in Britain in the 1970s would draw comparisons to Lennon and McCartney; of course, that can load anyone with unfair expectations, but the two did write and record a number of excellent pop songs and deserve to be fondly remembered.

“Tempted” is probably their best-known hit stateside, although it wasn’t particularly big for them at the time here or in the UK. However, it became a staple of 80s hits radio programming, abetted by its appearances in commercials for Gap and Burger King. “Tempted” only peaked at #41 on the UK charts; two of the songs on second album Cool For Cats both reached #2.

Those two songs are both on Singles, of course, and they are quite different. “Cool For Cats” was the rare A-side sung by Chris Difford and his Cockney accent; it’s a chugging, peppy song, upbeat and with an easily memorable melody. “Up the Junction” is very different. Musically, it’s a cleaner guitar sound, slower in tempo but not slow. Lyrically, it’s a narrative about meeting someone and falling in love and ultimately blowing it– no choruses, each verse tells another chapter in the story. Melancholy and bittersweet, I’ve always found it moving.

That combination is present in another one of my favorites, “Another Nail for My Heart”– in some ways, like “Up the Junction,” a song about self-loathing and alcoholism eroding a relationship. For my money, and as someone who knows what this feels like, it’s got one of the more poignant lines in regard to expressing that self-loathing: “Trying to be good by not being ’round.” It’s not quite as stunning as Paul Westerberg’s “Use to live at home, now I just stay at the house,” but it shares blood with it in their senses of weary defeat. Tillbrook’s narrator, at least, wants to do the best he can, but fears the best he can be is to not be around at all.

“Pulling Mussels (from the Shell)” is just a really fun song; the narrative of the lyrics are apparently (i.e. I read the Genius page before writing this) a portrayal of working-class vacationing beachside, with various characters engaging in such activities as surfing, reading light fiction, shopping for knick-knacks– and apparently for our narrator himself, a spot of the ol’ randy (I think that’s what they call intercourse).

“Black Coffee in Bed” is another favorite that deserves a mention. It’s more sprawling than most of their work, driven by a keyboard riff and running in at over six minutes long. Like so many of the songs on this collection, it’s driven by a bit of regret over love lost, another breakup song set in the aftermath of moving on, and it’s one of their classics, the length of the song turning it anthemic, a statement of purpose, in a way their other songs aren’t. (The song also lends this essay its title.)

The US version of Singles 45s and Under replaces East Side Story’s “Labelled with Love” with “If I Didn’t Love You,” released in the US (but not in the UK) as a single from Argybargy. That’s the version I’m familiar with, and the one we’re covering here. Musically, this is probably most similar to “Take Me I’m Yours”; it shares that song’s crunchy, fuzzy sound (also prominent in “Cool For Cats” and “Slap and Tickle”).

Difford and Tillbrook broke up the band in 1982, though they would reform in 1985 and release new material after a successful one-off charity gig convinced the two to reunite the group. In the interim, the two released Difford & Tillbrook in 1984; I’m ashamed to admit I’ve never listened to it, but for all intents and purposes it’s a Squeeze album.

It’s a little odd to choose a greatest-hits record to highlight a band, that’s for sure. This one, however, captures an era perfectly in a way many don’t (in that it covers the entirety of the period before their first breakup), and furthermore, it’s a great disc to choose to introduce people who may not be familiar with Squeeze to this underrated gem of a band. I hope I’ve convinced you to give it a listen! 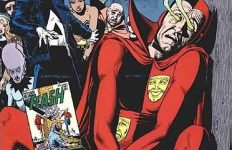