A friend of mine likes Benedict Cumberbatch. Thinks he’s pretty hot. She’s fairly outspoken about it. For some reason, the response to this is “let’s talk all kinds of trash about him on Facebook and tag her every time!” I get tired of it, and I probably don’t even know about every instance of it. I can only imagine that it’s even more annoying for her.

Look, if you’re convinced that Charles Manson was a misunderstood genius, you’ve got deeper issues. But if something about him would just work for you if it weren’t for the crazy mass murderer thing, well, your type is your type, and what do you do about that? I would imagine you’d keep that one pretty quiet, but if you have a crush on a major celebrity who’s conventionally attractive and has a large fanbase of women who believe that, is it really something that needs to get teased about? If you don’t agree that the person is attractive or talented, that’s on you.

I feel sometimes as though “agree to disagree” is a concept that a lot of people don’t get. They think it’s all “agree that it’s my right to believe that you don’t have rights.” There are some places where “agree to disagree” is an option, and there are others where it’s not, and “I am attracted to someone you don’t find attractive” is definitely an “agree to disagree” place. I’ve mentioned before that an old friend and I used to have the “Charlie versus Emilio” conversation back in the late ’80s and early ’90s—and, okay, that turned out to have an objective answer when Charlie turned out to be terrible. But if dark and brooding was your thing, you were just never going to prefer Emilio!

I did offer recently to help someone not like Tom Cruise when he said he just couldn’t help it. Like I’m going to leave that opening alone, right? But when people I know say they’re attracted to him, that’s up to them. I think he’s short and bland and not particularly talented, but I’m aware not everyone feels that way. They’re allowed to think he’s physically attractive and a talented actor, and there’s no reason to shame them for it. It’s not a crime if their tastes and mine don’t intersect.

As it happens, I think Benedict Cumberbatch is an attractive man and a talented actor. He’s charming on Sesame Street, though not Tom Hiddleston charming. He’s not high on my Celebrity Crush list, but I understand why he might be for someone else. (Actually, Tom Hiddleston isn’t high on mine, either, but he’s a pretty strong example for other people.) I think it’s fun to point out interesting things he’s done to my friend with the crush, but even if she were a fan of someone I consider odious or completely forgettable, that’s her attraction and not mine.

Women also supposedly aren’t visual creatures, according to a lot of pop psychology, so the fact that my friend likes the looks of Benedict Cumberbatch and the physical appeal of Charlie and Emilio and so forth aren’t part of the public conversation anyway. You’d think Magic Mike would have taught people a lesson there, but instead, women are getting shamed for being attracted to Channing Tatum.

Help me acquire some of the collected works of Scott Bakula; consider supporting my Patreon! 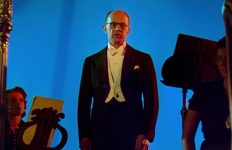