Browse: Home / So I Suppose I Should Summarise My Thoughts On The Infinity Saga

For the past few months, I’ve been working my way through the Marvel Cinematic Universe, concluding with Avengers: Endgame, and the more I think about it, the more irritated I am with myself for bothering in the first place. I casually kept up with the franchise through what is now known as Phase One, not giving it much more thought than I did any other blockbuster, until the release of The Avengers in 2012. My muted response to something the rest of the world fell passionately in love with left me deciding the appeal was lost on me and I strolled away from the franchise, but the critical space given to the subsequent movies was so overwhelming that, in 2014, I felt a vague responsibility as a movie nerd to keep up with the cultural conversation. What I discovered was a) the MCU’s place in the conversation was so large that everything that could have been said was already said, and I felt I had absolutely nothing interesting to add to it, and b) sometimes the cultural conversation is really, really boring. This movies aren’t formulaic, but they do have a very limited sense of what they will and will not do, and after a point even the writing on the films, no matter how beautifully written, was becoming stale and predictable.

Of course, since then the MCU’s place in the conversation has billowed out and devoured everything in its path; people can say that “they only release like six superhero films a year” all they want, but the Marvel machine has carefully developed a cycle of hype that’s more of a perpetual motion machine, raising question after question with pictures and hints and leaks and then, after the movie’s release, spawning and encouraging thinkpieces and hot takes for the month or so before the hype starts for the next film. Mercifully, the MCU took a break in the last half of 2019 after the release of Spider-Man: Far From Home, and for the first time in a long time I found myself actually thinking about the MCU as opposed to passively absorbing it. What’s inescapable is that, however much I might dislike the individual movies, the MCU is not just wildly successful, but the most successful and perhaps defining pop cultural event of the ’10s, genuinely achieving things nobody else had done before and were a lot more difficult to replicate than they looked. How much of that came from its particular form of storytelling? Was there a specific effect that the ‘shared universe’ created that wasn’t visible in either conventional serialisation or films disconnected in continuity but linked thematically?

For the most part, my conclusion is that if there is one, these movies are too incompetently made to convey it. It’s not often I’m baffled by other people’s reactions to art – indeed, I get why people who specifically choose not to think about movies enjoy these so much, and I don’t even mean that as an insult, and I get why fandoms, whose entire existence involves taking the surface imagery of a text and using it as the basis of creative pursuits, would get so much joy out of them. What blows my mind is that the consensus amongst people who have seen a wide variety of movies and written beautiful, fascinating interpretations breaking down the moral, emotional, and practical underpinnings of them in great detail is that MCU movies are shocking for their consistent competency. The individual movies are, for the most part, directionless and ugly slogs with pompous and empty speeches simulating character arcs and plot, with characters usually ending their movies in the same place emotionally that they began; I have very rarely walked away from an MCU movie feeling any sense of meaningful consequence, either to the characters or to myself.

And the shared universe aspect provides qualities that are both obvious and limited. Beloved Soluter scb0212 has remarked that one of the main joys of the MCU is seeing not just the image of a comic book superhero on the big screen, but seeing so many of them in the same shot, and even if I can respect that, it’s not really enough to hang twenty-odd movies on; what was genuinely cool and impressive in The Avengers has become dulled for me even as the crossovers have become more complicated – ‘the same, only moreso’ has rarely been an idea that excites me on its own, and that’s really all the MCU crossovers provide, ever more elaborate variations on combinations of characters. One thing that struck me watching Endgame was how it felt like the whole MCU had been building up to the idea of the Time Heist, even if this hadn’t been planned; that is to say, the MCU existed to create a continuity and internal world, which is to say that the MCU exists to generate more MCU. What I can’t get away from is how this is also true of beloved Solute Canon entry, The Shield.

The Shield exists to show, in completely linear order, the layout of events that happens because Vic Mackey shoots the social order in the face. After the first act and especially in the final few seasons, the story is perpetuated exclusively by its own history and continuity. There are two differences with the MCU: first, starting from the middle of the second season, The Shield was always working towards some kind of an ending, as opposed to the MCU simply generating more of itself. Secondly, The Shield doesn’t give a flying fuck how anybody interprets or reacts to it. It burns through action with the ruthlessness of its protagonist, indifferent to whether or not it makes characters likable or heroic or racist or consistent with a philosophical outlook, and in doing so it allows itself to become a kind of Rorschach test. By comparison, the MCU is covered in flopsweat as it desperately tries to keep its characters within a certain level of heroic and vaguely gestures at things that sound important, like colonialism and class warfare, hoping the audience sees it as something Deep and Cool and Entertaining.

I’m kind of running out of steam here, and I never really had much to begin with; just like every other time I’ve tried to engage with the MCU, I was doing this out of a vague sense of obligation, the sense that I poured a lot of time into watching it and I ought to justify that with an essay, but I must wearily conclude that the MCU is – and this, I realise, is the worst insult I can impart on anything as a Critic – not worth thinking about. It’s a series of images in which actors are successfully kept in focus, reflecting nothing, implying nothing, and meaning nothing. Its success comes largely down to the fact that a sufficient amount of money has been pumped into it. To put thought into it feels like an insult to the thoughtlessness in which it’s intended to be taken. All I’ve managed to do is solidify my exasperation with their outsized, undeserved space in the critical discourse, as if one day they’re going to release a complex character study and treatise on living morally in late stage capitalism that radically recontextualises all the nonsense up until now or something. I’ll finish with a list of things I genuinely liked about the MCU and then I don’t want to talk about it anymore. 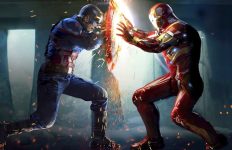